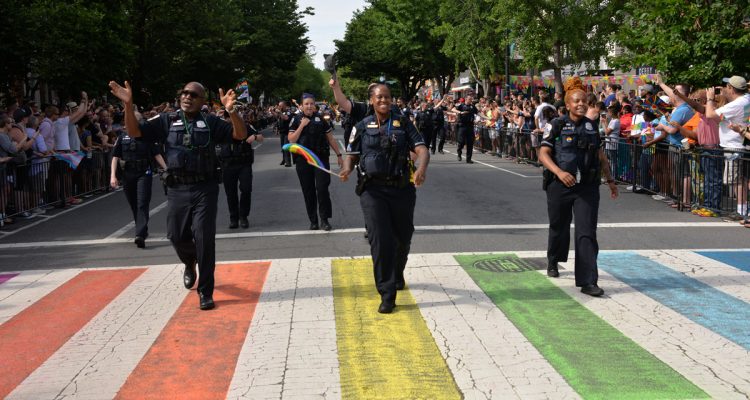 As cities across the U.S. once again hold in-person Pride month festivities after two years of pandemic-related pauses, a growing trend among Pride organizations attempting to restrict police presence at Pride events is gaining momentum.

The trend, which has only grown in recent years, has ignited debate among the LGBTQ community and outside groups attempting to balance support for the community with support for local law enforcement.

These calls for an end to police involvement in the events largely stem from a detailed history of discrimination and use of force among police departments toward the LGBTQ community and communities of color.

The Stonewall rebellion, during which patrons and local residents protested a police raid on the Stonewall Inn in New York’s Greenwich Village, are largely credited with sparking the modern-day LGBTQ rights movement. The narrative set by this history has organizations in some of the country’s largest cities trying to ban uniformed law enforcement personnel from Pride parades and festivals.

Pride groups in San Francisco and other cities have recently engaged in their own efforts to ban uniformed police from marching in their annual parades altogether.

In announcing their initial decision, San Francisco Pride directly related their reasoning to past harm done by law enforcement to the LGBTQ community.

“[San Francisco] Pride remains committed to practicing radical inclusion, practicing harm reduction in our space, and supporting those who are marginalized within our community,” the group stated. “We acknowledge and appreciate the steps that have been taken to heal decades of distrust between law enforcement agencies and the LGBTQ+ communities.”

Although the ban has since been reversed following a compromise between San Francisco Pride and the San Francisco Police Officers Pride Alliance, debate still lingers in other major cities with large LGBTQ communities.

New York, Seattle, and Denver are among the cities in which activists have banned or requested an absence of uniformed police presence at Pride events.

NYC Pride announced last year it would prohibit uniformed police officers’ participation in its events through at least 2025.

“NYC Pride is unwilling to contribute in any way to creating an atmosphere of fear or harm for members of the community,” the group said in a statement. “The steps being taken by the organization challenge law enforcement to acknowledge their harm and to correct course moving forward, in hopes of making an impactful change.”

But the bans are not met with open arms by all, with some believing the trend does more harm than good.

The New York Times Editorial Board characterized NYC Pride’s decision as a “misstep.”

“The organizers are certainly within their rights to reduce the number of armed police officers providing security, but let’s be honest: It’s a poke in the eye at law enforcement more than a meaningful action to address police violence or foster a dialogue about law enforcement reform,” said the board in an editorial. “These moves do nothing to celebrate and demonstrate solidarity within the LGBTQ community.”

Even among members of the LGBTQ community, opinions on banning police from Pride events remain divided.

In their response to NYC Pride’s ban on uniformed police at Pride, the New York Times Editorial Board cited a 2019 poll of 801 LGBTQ Americans conducted by Whitman Insight Strategies and Buzzfeed that found 79 percent of respondents favored having police participation in Pride events.

“In 2018 the decision was made that [Metropolitan Police Department] would not participate as a contingent in the Pride parade, and has not since,” the group said in a 2020 statement. “Going forward, [Capital Pride Alliance] will not permit any uniformed and armed police officers to march in the Pride parade or participate in [Capital Pride Alliance]-sanctioned events.”

But uniformed police did walk at the start of the D.C. Pride parade in 2019 (see photo), raising questions about the policy. Technically, the officers were not part of an official parade contingent, and rather were on duty. But they were seen waving to the crowd with at least one officer carrying a Pride flag.

Going into this year, it remains unclear whether the ban on uniformed police presence in D.C.’s Pride parade will lead to any friction with government officials similar to that seen during the events that played out in San Francisco. D.C. Mayor Muriel Bowser’s office in a press release said she remains supportive of the efforts being made throughout June to highlight the LGBTQ community and intends to march in the city’s Pride parade.

“We are focused, especially this year, on using Pride to bring people back together and to uplift and advance our D.C. values,” Bowser said in the statement. “We are proud that, for years, D.C. has led the nation in supporting LGBTQ+ rights, and together we will keep it that way. We are the District of Pride, and I look forward to seeing people at the return of the Pride Parade on June 11.”

Bowser’s office did not respond to request for further comment regarding the issue.