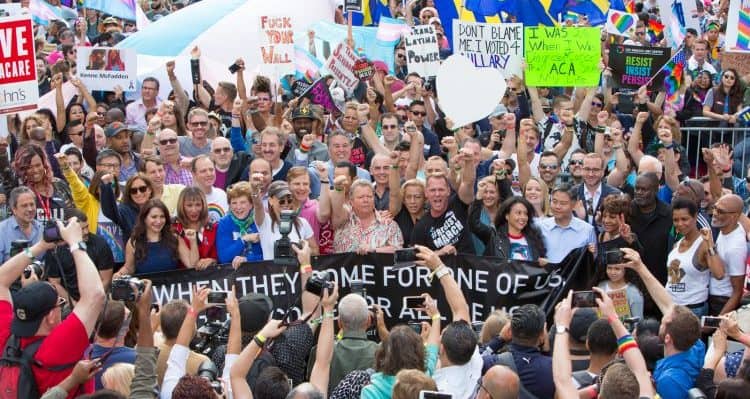 Pride returns to its roots: In anti-LGBT political climate, celebrations shift to demonstrations

In the ensuing decades, as more victories were scored for LGBT Americans, what started as a riot demanding equality morphed into parades and festivities celebrating love and unity. But this year, in some cities, Pride returns to its roots.

Earlier this month, that happened in Washington, DC, with the first Equality March, and with #ResistMarch in Los Angeles, California.

Brian Pendleton, founder of #ResistMarch, learned about the Equality March in Washington, DC, and at first thought of making a trip across the country — only to discover the march was on the same day as the LA Pride Parade.

“It sort of struck me as odd that our brothers and sisters would be marching for our rights in DC, and in LA, we were parading,” he said. “I ended up joining the board of Christopher Street West, which is the LA Pride organization. They gave me and my newly-formed committee control over Sunday’s activities.”

And the 3.5-mile parade became a thousands-strong protest march.

“We wanted our call to action to be exactly what we were doing: resisting those efforts that were trying to push us back in the closet and divide us,” Pendleton said. “This has always been about social justice. We originally took the to the streets, at least in LA, because of the one-year commemoration of the Stonewall Riots. Getting back to our roots as a protest organization really felt good for us.”

Back to where it all began

Atlanta Pride is moving more in this direction, and has been for several years.

“Pride was born out of a movement that was a protest movement,” said Jamie Fergerson, executive director of Atlanta Pride. “Particularly in times when we are under attack, it’s really important to embrace those roots and look and see what the need is in the community. I do believe that there is space and reason for celebration, but if we become an event or an organization that is completely divorced from that protest, civil rights, social justice movement, then I think that’s an identity crisis.”

Fergerson said the trans and dyke marches are “inherently political,” with no corporate sponsors and no logos.

“If you look at those marches, they are pretty radical marks of claiming space. A lot of the signs and banners are very political in those marches. There are a lot of people who just their being there is a political thing — they’re from a place where it’s not safe to be out and this is their first time to be at a queer event,” she said.

It’s also political when political leaders join in. Nancy Pelosi was among those who participated in #ResistMarch. At one point, Pendleton said, Pelosi didn’t think they were marching fast enough, so she sped up in her high heels to move the coalition along.

He said the idea was instead of there being spectators along the streets, to have all of LA in the streets alongside each other. Pendleton also said contrary to popular belief, Resist March wasn’t about the president, but rather to show state legislatures that the marginalized communities of America are “a big, unified force” that won’t stand for discriminatory legislation.

“We wanted everyone who feels like their rights are under threat to feel free to join us,” Pendleton said. “The LGBT community was lending its gigantic, iconic rainbow flag to anyone who felt they were under threat.”

Though the full line-up of festivities for Atlanta Pride hasn’t been announced yet, Fergerson said the racial justice solidarity contingent would be part of the parade this year, as will an expanded and politicized trans march and dyke march.

The festival overall will focus on becoming more intersectional and raising awareness about anti-LGBT sentiment around the globe. However, Fergerson doesn’t believe it’s Atlanta Pride’s place to completely change over as a Resist-style march.

“One of the best things that we have going is we have spent some real time building relationships that are not just transactional relationships, but real relationships, with other groups in town,” Fergerson said, speaking to some of the committee’s community reinvestment projects. “I think it’s important that we’re supporting those voices that are already there and already trying to do the work rather than make it something on our own. We’re much better positioned to partner and collaborate to do what we can to support the people, that this is their focus. I think if Pride organizations come in and usurp and take it over, I think that is violent and not helpful.”

Fergerson said the Pride committee looks to bring resistance to the front of the parade this year with a relevant tagline.

“We are a big and complex community and we absolutely need to keep social justice the core of our movement, and I think we need a safe space to celebrate,” Fergerson said. “Pride, if we’re doing it well, can be both of those things.”