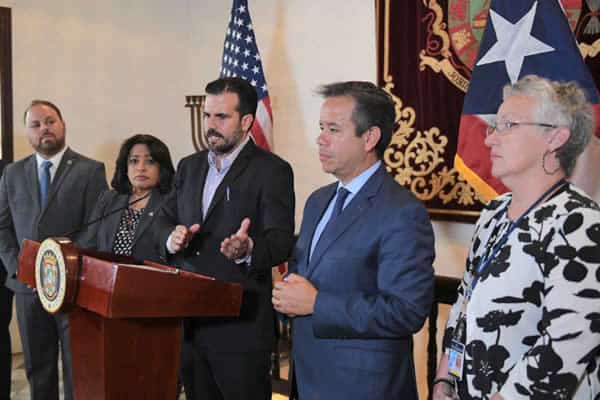 Puerto Rico Gov. Ricardo Rosselló is under growing pressure to resign after homophobic and misogynistic comments he made in a private group chat became public.

The Center for Investigative Journalism in Puerto Rico on Saturday published 889 pages of messages that Rosselló and several members of his administration sent to each other on the messaging app Telegram.

Puerto Rico CFO Christian Sobrino in a Jan. 2 message wrote “nothing says patriarchal oppression like Ricky Martin.” Sobrino added the openly gay Puerto Rican singer “is such a male chauvinist that he fucks men because women don’t measure up.”

The Orlando Sentinel reported there are also messages that mock David Begnaud, a CBS News reporter who received widespread praise for his extensive coverage of the aftermath of Hurricane Maria that devastated Puerto Rico in 2017.

Begnaud came out publicly as gay in June 2018.

Rosselló on Saturday in a statement said Sobrino, who represented him on a federal control board that oversees the island’s finances, and Puerto Rico Secretary of State Luis G. Rivera Marín resigned. Rosselló also said he would ask other members of his administration who participated in the chat to step down.

Protesters over the weekend gathered outside Rosselló’s official residence in San Juan and demanded he resign.

Rosselló on Sunday in a statement said he will not step down. Begnaud reportedmembers of the New Progressive Party, a pro-statehood party that Rosselló chairs, in the Puerto Rico House of Representatives opted not to ask the governor to resign “at the moment.”

“Despite the internal and external difficulties that we may have, the work will continue and the agenda will be completed in all areas,” said Rosselló in his statement.

The Center for Investigative Journalism published the full tranche of messages four days after federal authorities indicted former Puerto Rico Education Secretary Julia Keleher and five others on corruption charges. Rosselló returned to the U.S. commonwealth from France where he was on vacationing with his family.

“A governor or representative of a country should never talk or tweet like our governor,” Wilfred Labiosa, executive director of Waves Ahead and SAGE Puerto Rico, told the Washington Blade on Sunday. “He is a misogynist, homophobic, sexist, ageist pig who can’t accept he is not fit to be governor. He needs to resign.”

Pedro Julio Serrano, founder of Puerto Rico Para Tod@s, another Puerto Rico LGBT advocacy group, and Martin are among those who have also called for Rosselló to resign.

“It is shameful and unacceptable and cannot be resolved with an apology,” tweeted Martin on Saturday. “This is not the governor who we need,” he added. “This is not the Puerto Rico that our grandparents and parents built and much less the one that we want to leave for our children.”

His administration in February issued guidelines designed to make Puerto Rico’s public employees more sensitive to the needs of transgender people and same-sex couples and their children.

Members of the New Progressive Party in the Puerto Rico House on March 18 blocked a vote on a bill that would have banned conversion therapy for minors on the island. Rosselló less than two weeks later signed an executive order that prohibits the widely discredited practice in the U.S. commonwealth.

Rosselló in April announced the introduction of two bills that would have banned so-called conversion therapy with exemptions for religious institutions and clergy and sought to “clarify certain religious freedom principles.” Rosselló last month asked lawmakers to withdraw them amid sharp criticism from LGBT activists who argued they would have allowed discrimination.