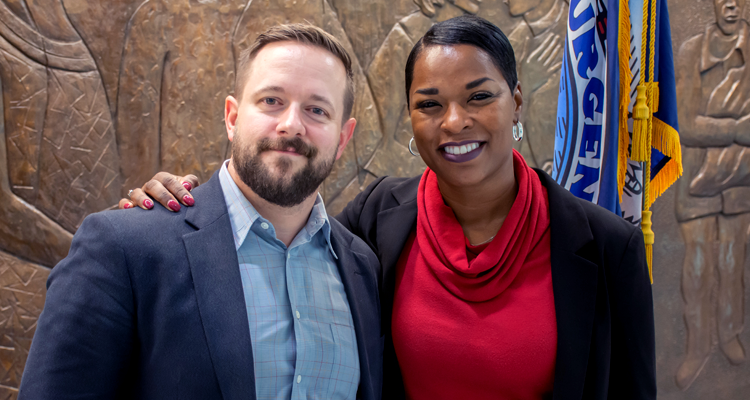 The Mayor’s LGBTQ Advisory Board has some new leadership: Ryan Roemerman has been appointed as the newest co-chair of the board. Roemerman is the founding director of the LGBTQ Institute at the National Center for Civil and Human Rights and served on the board as a member for the last two years.

“It has been an honor to have not only served as a member but to now serve as co-chair,” he told Georgia Voice. “To be able to see even deeper the inner workings of city government and how we’re trying to make sure the LGBTQ folks are being represented within the policies and practices of the city has been eye-opening.”

Roemerman joins Pam Stewart as her fellow co-chair. Stewart, who is also the Board of Directors Chair with GLAAD, has served on the LGBTQ Advisory Board since its inception in 2018. Stewart is nothing but complimentary of Roemerman, telling Georgia Voice that if she were the one to have made the appointment decision, she wouldn’t have changed a thing.

“In candor, I wanted him to be co-chair largely in part because Ryan is not just passionate about the work, he is influential in the city and in his day job at the [LGBTQ] Institute,” Stewart said. “His pedigree lends itself to great leadership, but more than that true authenticity of being tied to the vision of One Atlanta.”

Roemerman succeeds Kirk Rich, who served alongside Stewart for the first two years of the board. Rich left the board after being appointed to Atlanta Housing’s board of commissioners. According to both Roemerman and Stewart, Rich leaves behind a legacy of passion and change.

“What he left behind was his vision that whatever we did for the council was embedded in this One Atlanta dream that every citizen – any resident, worker, and visitor of the city – truly feels like this is the place to be,” Stewart said. “He’s helped with that legacy with his work on HOPWA [Housing Opportunities for Persons with AIDS], his inaugural (and now ongoing) work we’ve done with the city on Pride months, and how we’ve engaged on policies, like signing against conversion therapy. There are so many different examples [of legislation and policy] that his fingerprints are on.”

“Ryan was a perfect fit [to succeed Rich] because he shares a lot of those passion points on similar legislation, policies, and initiatives.”

“Kirk very much provided me the background I would need to come into this with eyes wide open – all the challenges and opportunities – which was very helpful,” Roemerman said.

Although Roemerman had experience serving on the board, he says his experience as co-chair has been vastly different.

“There’s a lot more meetings, more detail involved,” he said. “It’s a labor of love – all of it is very rewarding because you know you’ll be making a difference.” However, he was sure to emphasize the importance of every single person on the 35-member board.

“We’re two folks, but it’s the Advisory Board that we’re really inspired by,” he said. “They make sure we are being transparent and equitable and that the wheels of this whole operation keep spinning. If it wasn’t for them, we would have a much harder time.”

As for the future of the board and LGBTQ Atlanta, Stewart says that they’re experiencing a major shift in goals.

“The first [two years] were about being heard and represented,” she said. “This time it’s about legacy building. If you think about the first 24 months of this experience, it was about developing and designing the structure, imbedding the LGBTQ community into the city’s practices and policies, and rethinking funding. The next two years will be focused on rooting these processes that we’ve established and putting governance around what we’ve formed so that this isn’t just a one-time LGBTQ-friendly mayor, but [LGBTQ equality] is actually embedded in the city’s practices.”

Specifically, Roermerman tells Georgia Voice that he and Stewart are currently drafting a letter to Mayor Bottoms regarding their goals, one of which is HOPWA funding: “making sure that there are clear and transparent ways that the money is allocated, that people are being reimbursed in a timely fashion, that we are meeting the needs of folks that need access to this support.”

Stewart has also spearheaded an Opportunity Fair, which will be coming soon.

“I’m hopeful we’ll be able to improve upon [the city’s policies and practices],” Roemerman said, “and make sure everybody has access to the resources and things they need to live a happy life here in Atlanta.”