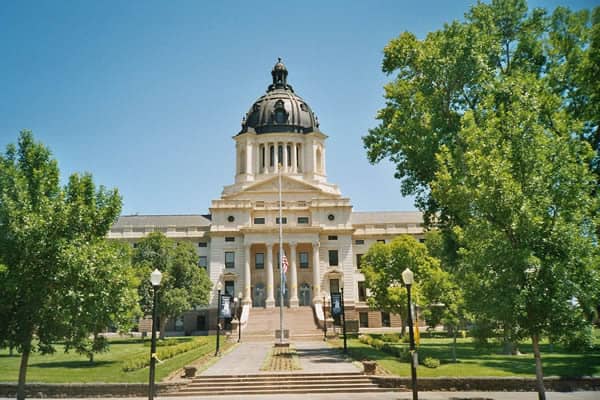 As legislative sessions continue across the country, South Dakota is leading the way with anti-LGBT bills through its recent advancement of a ‘Don’t Say Trans’ bill — but at least 78 anti-LGBT measures have been introduced in other states.

The South Dakota House of Representatives on Monday approved House Bill 1108 by a vote of 39-30. The legislation bars public school teachers in grades K-7 from instructing students about gender dysphoria, or the experience of being transgender.

Mara Keisling, executive director of the National Center for Transgender Equality, said in a statement the bill is “a harmful effort to harm transgender youth that will have ramifications for every South Dakotan.”

“The people of South Dakota know their state cannot stay true to South Dakotan values with a bill like this one on the books,” Keisling said. “If passed, the legislature will have delivered a self-inflicted wound against the entire state.”

The bill now heads to the South Dakota Senate. If the legislation is approved there, it will head to the desk of Gov. Kristi Noem. The Washington Blade has placed a request with Noem’s office seeking comment on whether she’d sign or veto the bill.

But the “Don’t Say Trans” legislation is one of three anti-transgender bills pending in South Dakota, according to the Equality Federation.

Ian Palmquist, senior director of programs for the Equality Federation, said Tuesday in a conference call with reporters South Dakota is a place for central concern in 2019 for LGBT advocates keeping an eye on anti-LGBT bills.

In addition to the “Don’t Say Trans” bill, another bill allows parental refusal for transition-related care for children, and another limits transgender participation in school sports.

“So we’re not near that at this point, although, of course, bill introductions really aren’t finished in state legislatures all over the country yet,” Palmquist said.

Two of those bills seek to deny transgender people access to the restroom consistent with their gender identity, which is a reduction from years past. Palmquist attributes that to the massive backlash over House Bill 2 in North Carolina and the defeat of anti-trans efforts in Massachusetts.

Another category of legislation is “religious freedom” bills seen to enable anti-LGBT discrimination. Palmquist identified 18 bills in this category.

In this category are bills in Colorado, Kentucky and Tennessee that would allow taxpayer-funded religiously affiliated adoption agencies to refuse child placement with a family inconsistent with their religious beliefs, such as LGBT homes. (Three states have enacted these laws just last year.)

“That kind of legislation really puts young people at risk, leaving them in the system, keeping them from loving and caring families that could be taking care of them,” Palmquist said.

With Republicans in control of the Tennessee Legislature and the governor’s mansion, LGBT rights advocates have expressed particular concern about the anti-LGBT adoption bills pending before that state.

There are two anti-LGBT adoption bills before Tennessee: HB0836 would allow adoption agencies to deny placement in an LGBT home and SB0848 would bar state and local governments from penalizing such agencies.

“These measures represent state-sanctioned licenses to discriminate,” GLAAD CEO Sarah Kate Ellis said in a statement. “This effort in Tennessee is part of a coordinated campaign across the country to turn back the progress LGBTQ people have made, and the fair-minded people of Tennessee will see right through this charade, which harms families and children by hiding behind the false guise of protecting religion.”

In seven states, Palmquist said “religious freedom” bills have been introduced along the lines of the law Mike Pence signed as Indiana governor in 2015 allowing refusal of service to LGBT people. However, Palmquist said they’re fewer in number than in years past.

Rebecca Isaacs, executive director of the Equality Federation, identified as a source for these anti-LGBT bills “Project Blitz,” a 148-page plan promoted by the Congressional Prayer Caucus Foundation that provides the model for the legislation.

“In 2018 alone, more than 70 of these Project Blitz-related bills — including anti-LGBTQ bills, bills that would undermine reproductive health care, attempting to inject religion into public schools — these were bills that were introduced in state legislatures across the country, so it’s really something to look out for,” Isaacs said.

But despite these efforts, Isaacs said on the conference call “people are really looking to the states” to advance LGBT rights in the face of a hostile Trump administration and uncertain Supreme Court.

As examples of victories, Isaacs cited Massachusetts voters’ decision to reject at the ballot last year a referendum seeking to undermine the state’s transgender non-discrimination law in addition to New York Gov. Andrew Cuomo signing into law bans on conversion therapy for youth and anti-transgender discrimination.

“In 2019, we expect we’ll be educating people more about the harms of conversion therapy, more education about why we need non-discrimination protections in employment and public accommodations, and again why it’s important to continue working on HIV and ending discriminatory laws against people living with HIV,” Isaacs said.

As of right now, 30 states have no laws or incomplete laws against anti-LGBT discrimination in employment, housing and public accommodation, but 45 bills have been introduced in 18 states seeking to enact those protections, according to the Equality Federation.

In the wake of New York approving its transgender discrimination law, Issacs said eyes are on Virginia to determine whether it’ll pass a law against anti-LGBT discrimination. Palmquist admitted efforts are complicated in Virginia by high-profile scandals engulfing each of the three top public officials in that state.

Palmquist said efforts are also underway to enact pro-LGBT bills seeking to ban conversion therapy. Bills along those lines are moving in Colorado and Minnesota, which are set to have committee hearings this week, Palmquist said.

Additionally, Palmquist said legislation is moving forward to seeking to bar “gay panic” as a legal defense against those accused of violent crimes. Nine states have introduced bills that prohibit the use of this kind of defense in their courts.

“This is obviously a ridiculous justification for committing a violent act, but we have seen it used in defenses around the country,” Palmquist said.

These bills allow individuals to select a non-binary gender and to ease the requirement with which they can change their gender marker, which Palmquist said is “critically important for trans people.”

“These bills are based on flawed science, increased stigma and discourage people from getting tested — and they treat HIV differently from other communicable diseases,” Palmquist said.