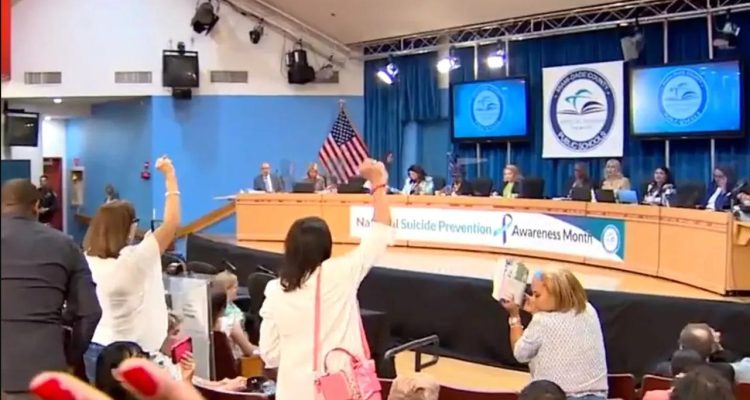 The Miami-Dade School Board on Wednesday rejected, by an 8-1 vote, a proclamation recognizing October as LGBTQ History Month in the district. This proclamation mirrored a nearly identical proclamation approved by the board with a 7-1 vote last year.

The board’s lone non-voting student advisor Andrea S. Pita Mendez, told WPLG that she was very scared during the meeting. School security had to intervene when the crowd got rowdy after Mendez, 17, said she supported the recognition of LGBTQ History Month after talking to her peers.

“Our students want this to pass,” said Mendez.

School board member Luisa Santos, who represents District 9, told WPLG she was outraged by the way the adults who were in the room disrespected Mendez. Some of the adults booed the high school student who was attending the second meeting of her term.

The measure, introduced by board member Lucia Baez Geller, would have symbolically declared October LGBTQ History Month in Miami-Dade County Public Schools and included a request to district staff to explore ways to support 12th grade civics teachers interested in including landmark U.S. Supreme Court cases on marriage equality and nondiscrimination in their course work.

During the public comments, many of the statements made were decidedly homophobic and transphobic with emphasis on religious freedoms and parental rights. Amid the mention of religion WPLG noted that MaryBeth Loretta, a clinician at the Alliance for LGBTQ+ Youth, asked the members to support the recognition “like Christ would do.”

The Miami-Dade School Board’s majority during the debate made statements that indicated that the vote to reject was due to seeing the proclamation being in conflict with the state’s Parental Rights in Education bill, also known as the “Don’t Say Gay” law.

Eulalia Maria Jimenez, the chair of Moms for Liberty Miami-Dade, asked the school board members to vote against the recognition and said it equated to “indoctrination.”

“The Don’t Say LGBTQ law is rooted in the same dangerous tropes about LGBTQ people and baseless attacks on teachers that were on full display in public comments at last night’s hearing. We are shocked and alarmed to see this reversal from the Miami-Dade School Board. This is a horrible signal to send to the thousands of LGBTQ youth in Miami-Dade County public schools. Voting down this simple recognition of our LGBTQ community makes our schools less safe.”

“Nearly every board member opposing the resolution voiced their belief that the proclamation violated the Don’t Say LGBTQ Law, further evidence of the sweeping censorship of this law. Across the state, the law has fueled bans on books and ‘safe space’ stickers and has led to dangerous policies targeting transgender students. Miami-Dade County Public Schools have a long history of leading on common sense policies that include, recognize, and protect LGBTQ youth. Last night, board members abandoned that mission in service to anti-LGBTQ fear, misinformation, and a governor obsessed with a future presidential run,” the statement added.