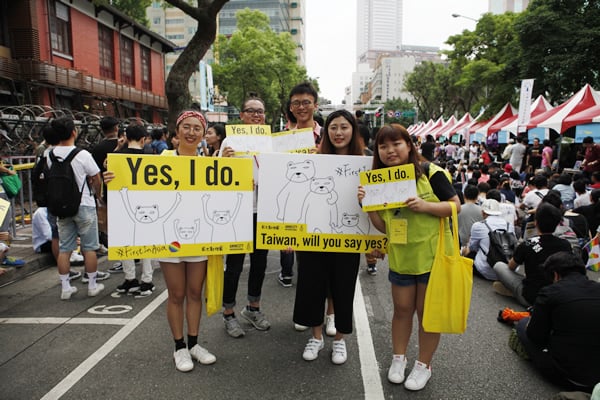 A referendum on whether same-sex couples should receive marriage rights in Taiwan failed on Saturday.

Questions on whether marriage in Taiwan should be defined as between a man and a woman and whether same-sex couples should be able to enter into civil unions or domestic partnerships, as opposed to marriages, passed by a margins of 72-28 percent and 61-39 percent respectively. Voters by a 67-33 percent margin also said Taiwan’s Gender Equity Act should not include LGBTI-inclusive school curricula.

Taiwan’s Constitutional Court in May 2017 ruled the provision of the island’s civil code that does not “allow two persons of the same sex to create a permanent union of intimate and exclusive nature for the committed purpose of managing a life together” is unconstitutional. The landmark ruling also said same-sex couples could legally marry within two years if Taiwanese lawmakers fail to “amend or enact relevant laws” that allow them to do so.

“We are deeply saddened and disappointed by the referendum results today,” said the Marriage Equality Coalition Taiwan and other advocacy groups on Saturday. “However, we would like to express our gratitude toward those who have been supporting the cause throughout the process.”

Evan Wolfson, founder of Freedom to Marry, and two of his former colleagues, Cameron Tolle and Thalia Zepatos, worked with the Marriage Equality Coalition Taiwan, an organization that is campaigning in support of marriage rights for same-sex couples on the island, before the referendum. The National Organization for Marriage provided support to marriage opponents.

“Tonight, we send our support to advocates and families in Taiwan who are hurting after a disappointing election result,” said Wolfson in a statement. “Over the last year, anti-LGBT organizations — bankrolled and instigated by U.S.-based groups like the National Organization for Marriage — spent millions on scare tactics and deceit, in an effort to spread lies about gay and lesbian people and harm families.”

Taiwan would have become the first country in Asia to allow gays and lesbians to marry if Saturday’s referendum on the issue passed. Wolfson in his statement notes the island’s lawmakers still face a May 2019 deadline to extend marriage rights to same-sex couples, despite the referenda results.

“While the results of the referenda are not what we hoped for, it is clear that the movement for marriage in Taiwan will not be deterred,” he said. “Nothing about tonight’s votes undermines the landmark court ruling affirming that the freedom to marry is a right guaranteed by Taiwan’s constitution. And nothing changes the clear mandate from the Court: That by May 2019, lawmakers must update the civil code to allow same-sex couples to marry.”

The referenda took place a day after Bermuda’s top court ruled a law that rescinded marriage rights for same-sex couples in the British island territory is unconstitutional.

A referendum on whether to define marriage as between a man and a woman in the Romanian constitution’s definition of family failed last month because of insufficient voter turnout. Kim Davis, a soon-to-be-former Kentucky county clerk who went to jail for refusing to issue marriage licenses to same-sex couples, traveled to Romania last year to campaign in support of the proposed amendment.

Taiwan would become the first country in Asia to extend marriage rights to same-sex couples if lawmakers grant them before their May 2019 deadline.