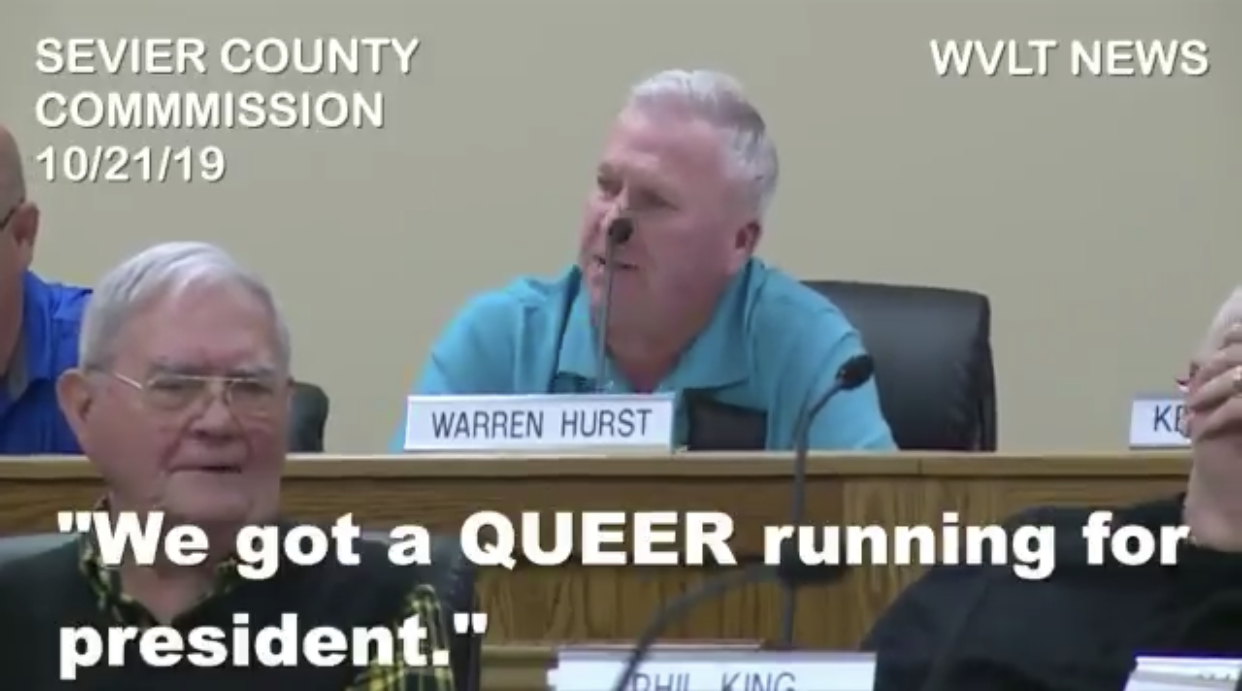 A video has been released of a county commissioner from Tennessee hatefully referring to gay Democratic presidential candidate Pete Buttigieg as “a queer.”

At a meeting regarding an ordinance to make Sevier County of Tennessee a “gun sanctuary” (a symbolic measure that signifies the county opposes all forms of gun control) on Monday (October 21), Sevier County Commissioner Warren Hurst went on a rant about the Democrats running for president, specifically attacking Buttigieg.

“We got a queer running for president, if that ain’t about as ugly as you can get,” Hurst said to laughs and applause from others at the meeting. “Look what we got running for president in the Democratic party. We can go over here to [the Sevier County] jail and get better people out of there than those running [as Democrats] to be president of the United States.”

“I’m not prejudiced,” Hurst continued. “A white male in the country has very few rights and they’re getting [taken] more every day.

NEW: “We got a QUEER running for President… the white man has very few rights.”

When WVLT8 contacted Hurst about his comments, he stood by them. However, his comments received a lot of flack; Sevier County distanced themselves from Hurst’s comments, saying they didn’t reflect the administration’s stances.

The statements made by Commissioner Hurst at the Sevier County Commission meeting of October 21, 2019, do not reflect the opinion or position of Sevier County administration. Sevier County is an Equal Opportunity Employer and does not discriminate (1/2)

based on race, color, religion, sex, national origin, age, disability, or status in any other group protected by law. (2/2)

After the video went viral, many people from Sevier County and beyond also condemned the county commissioner’s comments.

I live in Sevier County and I can tell you that a lot of people in this county were outraged with his comments. People are even talking about going to city hall to make their voices heard.

That “queer” running for president is a Christian veteran who spent 7 months in Afghanistan, initiated rebuilding of 1000 homes in his first mayoral term, and was re-elected with 80% of the vote. Sevier Co—we are better than this hate. #Buttigieg https://t.co/JZDn2uKXx3

Sevier County, you got a bigot in the henhouse. You can't sit in a commissioner position, call someone a queer, and then pretend you don't have rights. https://t.co/AzwX1gOEc4

@wvlt This kind of hate and bigotry will continue as long as the citizens of communities like @SevierCounty fail to hold elected officials accountable for their decision to not represent all their constituents, regardless of age, sex, race, sexual orientation.