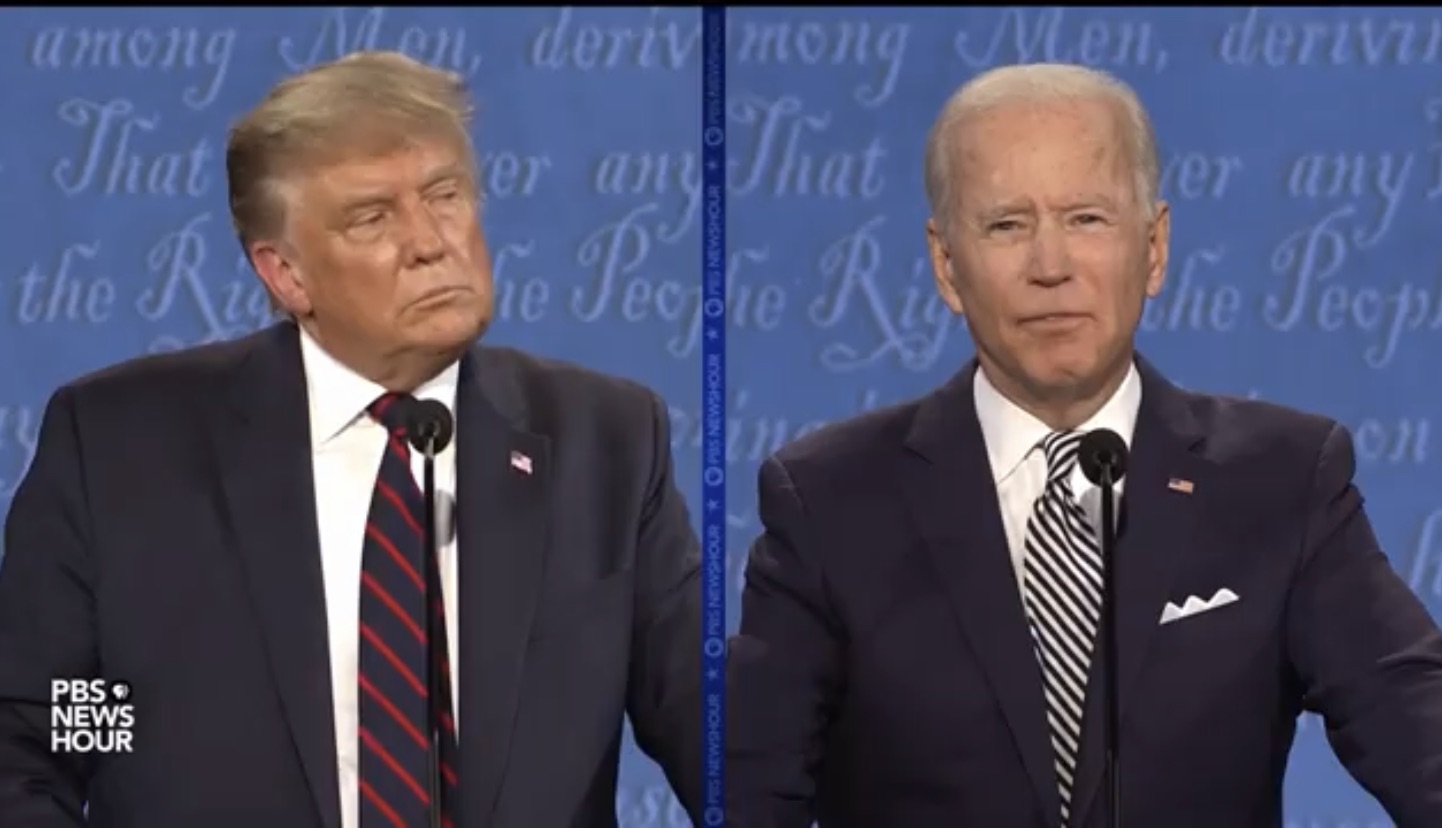 The first meeting of the two major party presidential candidates Tuesday night was billed as a “debate” but, as lesbian political commentator Rachel Maddow put it afterwards, the event turned out to be a “monstrous unintelligible display of logorrhea.”

What happened of particular interest to the LGBTQ community was President Trump’s refusal to tell white supremacists to “stand down” and his comment, instead, telling an extremist right-wing group that has voiced anti-LGBTQ views to “stand by.”

Trump’s response on the white supremacist question from Fox News moderator Chris Wallace garnered more attention from the post-debate commentary than his remarks on any other issue during the 90-minute event.

Trump made his “stand by” remark when Wallace pressed Trump to say whether he was “willing to condemn white supremacists and militia groups and to say they need to stand down and not add to the violence” in cities around the country.

Trump tried initially to brush off the question with a “Sure, I’m willing to do that” but adding quickly that he believes the real problem is with anti-fascist groups on the left. Wallace pressed him again about white supremacists, and Trump asked Wallace what group Wallace wanted him to denounce. Biden tossed out the name “Proud Boys,” a male-only group known for its anti-women, anti-black, anti-Muslim, anti-Jew, and anti-LGBT rhetoric and activities.

Trump said, “Proud Boys, stand back and stand by.”

“Trump telling white supremacists to ‘stand back and stand by’ was a disgrace that gave aid and comfort to racist bigots all across America,” said gay political commentator Keith Boykin. In a post-debate column for CNN, Boykin called Tuesday night’s event “the worst presidential debate in American history” and “an indictment on anyone who ever supported Donald Trump for president.”

Charles Moran, a spokesman for Log Cabin Republicans and a Trump supporter, said he took from that that President Trump “is willing to clamp down on extremism on both sides, as he did earlier last week by condemning the KKK and Antifa as domestic terrorist groups–something Obama/Biden never had the courage to do.”

Moran said he saw the debate as “a stark display of a career politician who has spent 47 years in Washington, D.C., against a demonstrated change agent in Donald Trump who has faced some of biggest challenges head on.”

Log Cabin Republicans’ founder, Rich Tafel, who is not a Trump supporter, said, “Any normal President in our nation’s history would have denounced violent actions by radical groups.”

“When he said that the Proud Boys should ‘stand by,’” continued Tafel, “he was signaling to a violent group that he may call on them and they should stand down for now but be ready for his call. That’s how I interpreted it.”

“It’s not just that he didn’t repudiate white supremacists,” said CNN’s openly gay news host Anderson Cooper after the debate, “he told them to ‘stand by.’ Like, ‘Oh, don’t do anything now but stand by because I might need you’? Can you believe that the president of the United States would say that?”

Lorri Jean, chief executive officer of the Los Angeles LGBTQ Center, said Trump’s refusal to condemn white supremacists and his urging them to “stand by” delivered a “clear message” to LGBTQ people.

“He doesn’t want to build understanding and acceptance or even tolerance,” said Jean. “He wants to continue to create division. He has already appointed more than 300 judges, most of whom are immensely hostile to LGBTQ equality. Worst of all, his attempt to undermine the legitimacy of our national elections is a disgrace.”

Annise Parker, president of the LGBTQ Victory Fund, characterized Trump’s behavior during the debate as “unhinged.”

“He brought a level of chaos and toxicity to this debate that is unparalleled in American politics and was a desperate attempt to distract from a failed presidency,” said Parker, who served as mayor of Houston for six years. “His refusal to denounce white supremacy and his embrace of bigotry to defend his agenda and supporters makes clear this is an election of unprecedented consequences.”

In one interesting sideshow leading up to the debate, President Trump’s son Eric drew some attention when, during a nationally broadcast Fox News show, he accidentally claimed to be part of the LGBT community.

The stumble occurred during a Fox & Friends segment in which the moderators were talking about a September 28 opinion piece in the New York Times about a “Secret Trump Voter” who is a lesbian. Fox & Friends co-host Ainsley Earhardt said the essay told the story of a Manhattan lesbian in her 50s who identified only as Chris. The lesbian was supporting Trump, said Earhardt, because her 401k went up 19.6 percent and the Affordable Care Act had caused her health insurance to become unaffordable.

Earhardt then asked Eric Trump, “Are you counting on this person, the secret voter?”

“Ainsley, that person’s there. I see it everyday,” said Trump. “The LGBTQ community –they are incredible and you should see how they’ve come out in full force for my father every single day. I’m part of that community, and we love the man….”

He later told the New York Post that he had simply been trying to paraphrase what gay supporters of his father say.

“To clarify,” said Eric Trump, “many of our close friends are part of the LGBTQ community, which was the intent of my statement — the left has taken that vote for granted for a long time and support from the gay community for my father is incredible. As to me personally, as I think you know, I am a happily married man to my wife, Lara.”

The next debate is Wednesday, October 7, between the two vice presidential candidates.