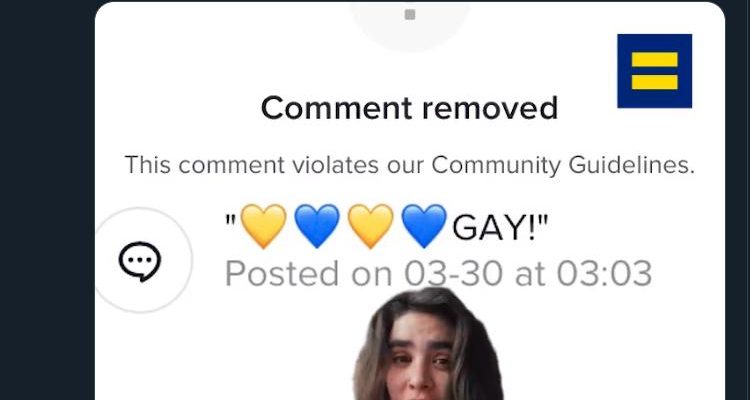 A Tik-Tok reel-post of the protests against Florida’s ‘Don’t Say Gay’ on which the Human Rights Campaign left a comment that included the word ‘gay’ got the nation’s largest LGBTQ+ rights advocacy non-profit suspended for a couple of days.

In a tweet Monday, HRC wrote, “Seriously @tiktok_us? You banned us for using the word gay in a comment. You need to do better!”

Ty Cobb, senior director of strategic initiatives at HRC, told The Advocate Tuesday in a statement:

“What message does it send to young people when we comment or post LGBTQ+ content and it’s deemed inappropriate and a violation of community guidelines? We’re fighting a battle for our lives. Elected officials are trying to censor our speech and restrict our access to healthcare and equal opportunity. Our need to communicate to our community and allies is more important than ever right now. Having our TikTok account suspended for two days means our ability to post educational, affirming content was restricted, which is nothing short of devastating.”

Tik-Tok has a checkered and problematic history in its engagement with the LGBTQ+ community. TikTok’s “For You” page recommendation algorithm circulated videos promoting hate and violence targeting the LGBTQ community during Pride Month, while the company celebrated the month with its #ForYourPride campaign.

There are no tailored TikTok policies specifically addressing safety for the LGBTQ community. Instead, the platform’s community guidelines relevant to protecting the LGBTQ community are folded into TikTok’s “organized hate” and “hateful behavior” policies barring users from directing hate toward an individual or groups based on their “sexual orientation, sex, gender, gender identity,” among other characteristics.

LGBTQ rights organization GLAAD analyzed LGBTQ safety on TikTok in its Social Media Safety Index released in May. In its recommendations, it noted that “TikTok must prioritize improved practices and systems to reduce anti-LGBTQ hate and extremist content.”

Anti-LGBTQ content not only slides under TikTok’s radar but seems to be actively promoted by the company’s algorithm.

Media Matters for America, a Washington D.C.-based media watchdog group noted: “Let’s be clear: No one knows exactly how TikTok’s “For You” page algorithm is formulated. We have a rough idea, as TikTok has explained that recommendations are based on a number of factors like user interactions, video information, and device settings.”

LGBTQ+ individual users on the Tik-Tok platform also find themselves targeted by organized efforts by right-wing homophobes who have discovered how to “game” the platforms to force content guideline strikes or violations algorithms which sometimes result in a complete ban and deplatforming of those users affected.

The Culver City based social media company spokesperson responding in an email to The Advocate explained the company took action immediately after it knew of the issue with HRC.

“We restored the comment as soon as we were made aware of this error and will continue to provide ongoing training to help our moderators make consistent and accurate decisions,” the spokesperson for the company said. “We are proud that LGBTQ+ community members choose to create and share on TikTok, and our policies seek to protect and empower these voices on our platform.”

Tik-Tok has not responded to the Blade’s request for explanation or comment.