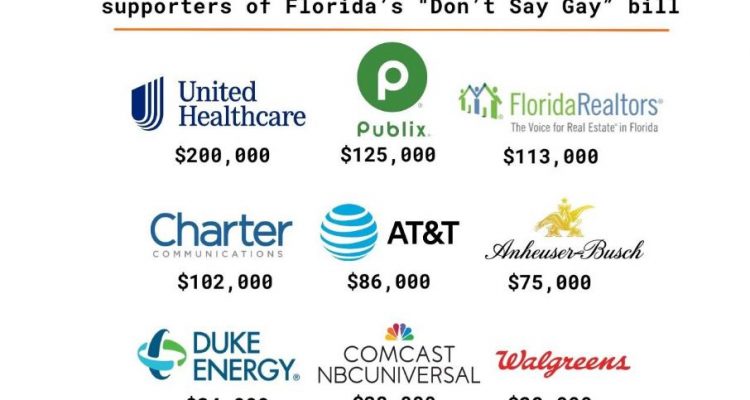 Some of the top companies in the U.S. that show public support for the LGBTQ community have donated thousands of dollars to the politicians behind a piece of Florida legislation opponents deemed the “Don’t Say Gay” bill.

The bill, which has versions in both the Florida House and Senate, would ban classroom discussions about sexual orientation and gender identity that are not “age-appropriate” in schools — though it is not clear what is considered “age-appropriate.” It also includes a provision that could effectively “out” LGBTQ students to their parents without their consent.

Despite opposition from Democrats and LGBTQ rights advocates, the “Don’t Say Gay” bill is gaining momentum in the Republican-controlled Florida Legislature.

Two weeks ago, Florida Republican Gov. Ron DeSantis appeared to voice support for the “Don’t Say Gay” bill, saying at a press event that it was “entirely inappropriate” for teachers and school administrators to have conversations with students about their gender identity.

“I know the ramifications of a bill like this could be detrimental to our LGBTQ youth,” out Florida state Senate candidate Eunic Ortiz told the Washington Blade.

Yet, a recent investigation from Popular Information, a political Substack newsletter run by veteran progressive journalist and political staffer Judd Legum, found some of the nation’s top companies — like Comcast/NBC Universal, UnitedHealth Group, Duke Energy, AT&T and Walgreens — have donated to the politicians behind the “Don’t Say Gay” bill.

Comcast/NBC Universal, for example, donated $1,000 to state Sen. Dennis Baxley, the main sponsor behind the bill in the Senate. In addition, the company gave a total of $28,000 to the top supporters of the anti-LGBTQ legislation since 2020, according to Legum and two other reporters, Tesnim Zekeria and Rebecca Crosby.

The Blade reached out to several representatives at Comcast but did not immediately receive a response, nor did Popular Information.

Comcast has publicly supported the LGBTQ community in recent years. “Some people may think the LGBTQ rights journey is done and the struggle is over, but it isn’t. Our job is to continuously educate,” said Yvette Miley, senior vice president of MSNBC and NBC News, on its website.

UnitedHealth Group has donated at least $200,000 to DeSantis since 2020 despite his public support for the “Don’t Say Gay” bill and other anti-LGBTQ legislation, according to the article.

Duke Energy, one of the largest electric companies in the U.S., has donated $34,000 to Florida legislators behind the “Don’t Say Gay” bill since 2020, including $25,000 to DeSantis and $1,000 to Baxley, according to the investigation.

The company has also received perfect scores from the HRC’s Corporate Equality Index.

The Blade attempted to reach Duke Energy representatives by phone and email but have yet to receive a response. Legum’s team also couldn’t contact the company for comment.

AT&T has donated $86,000 to the politicians behind the bill, including $80,000 to DeSantis and $500 to Baxley, Popular Information reported.

The company has supported the LGBTQ community on social media, partnering with the national LGBTQ youth suicide group the Trevor Project during last year’s Pride month.

“At AT&T we understand that unity starts in our own community, and we are committed to being a company that recognizes, embraces, and standings with LGBT+ people,” it said in a statement.

Warner Media, the company that owns AT&T, did not immediately respond the Blade’s request for comment.

Walgreens has donated at least $28,000 to DeSantis and four lawmakers who have voted in favor of the bill, according to Popular Information.

For Pride 2021, Walgreens Boots Alliance, its parent company, said it “created and encouraged everyone … to use a special Pride month background when they appeared on video during meetings to express their allyship.”

The company also did not respond to the Blade’s request for comment.