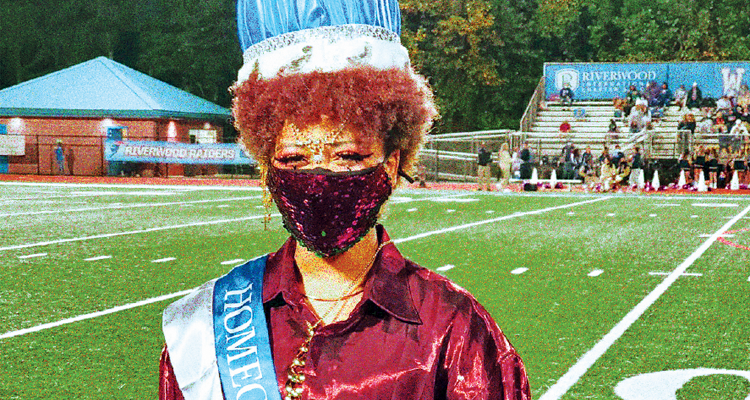 The 2020–2021 school year is sure to go down in history. For high school seniors everywhere, this was not the way they envisioned spending their last year of school — virtually and missing the traditional activities that bring their high school year to a satisfying end.

Despite the unexpected start to the school year, it will be a memorable one for 18-year-old high school senior Connor Fair. Fair, who is a trans man, was crowned homecoming king last month at Riverwood International Charter School (RICS) in Fulton County. He made history as the first transgender man to win homecoming king in Georgia.

When one of his friends suggested that they all — a group of gender nonconforming and transgender friends — run for homecoming court, Fair recalled in an interview with Georgia Voice, “I thought it was the most absurd thing I had ever heard in my life.”

A few days later, though, he received a grade level group text message asking who was running for homecoming court. On the spur of the moment, Fair texted back that he was, and nominated his female friend as a running mate.

“I really just threw it out there,” Fair recalled with a chuckle.

Not long after putting his name out as a candidate, Fair got a message in the group chat from the female friend he had nominated. She had received an email telling her that she made homecoming court. In that moment, he recalled he wasn’t surprised that she made it, “because she’s a cis girl.” But he checked his own email and, in the middle of a Spirit Halloween store, found out that he too had made the court. “In the middle of the Spirit store I was freaking out,” Fair recalled. “’Oh my god! I just made homecoming court!’”

He had low expectations, but was simply “happy to be nominated.” Fair was nominated along with three other boys, all of whom were popular — and cisgender. “I thought, ‘oh no, this is never happening in a million years,’” he said.

Friday, October 16 was the day everyone had been waiting for: Homecoming 2020. “I was all dressed up, and I was excited to be there in the environment of the homecoming court and knowing that I did that if nothing else,” Fair recalled. His mother, little sister and girlfriend were also there to take part in the moment.

Fair, dressed in an iridescent red button-up shirt, black cargo pants and sparkly combat boots, made his way to walk across the football field. He noticed the other guys and their parents looking at him, but comfortable in his masculinity, Fair walked with confidence to his spot on the field to line up for the kings.

“I was very nervous,” he said. “I just remembered walking down the field and my girlfriend looked at me and said, ‘You’re going to do great.’ I told her, ‘No way am I going to get it, but I’ve done something big here today.’”

Then, he heard his name. He won homecoming king.

“It was such a surreal experience,” Fair said. “I’m glad I had a mask on because my face, I was just flabbergasted. The other guys looked over at me confused, but they clapped.”

“It was a really amazing experience,” he added. “Dealing with transphobia in the public school setting was definitely hard. It’s been a long three years. I came out during my freshman year, but to have something like that happen was definitely amazing.”

Fair experienced some transphobia and negativity from some teachers and staff after coming out freshman year. “I definitely think any teachers or staff who are transphobic, it’s definitely a message [to them] that your time is over,” Fair said of his win and the overwhelming support of the student body. “This isn’t the status quo anymore. People accept me for who I am. You’re going to get with the times or not. You’re outnumbered at this point.”

“I was also very grateful for the staff who planned our homecoming and that this wasn’t another story of a trans man being put on the female ballot. I’m very grateful for that,” he said. “We are moving in a better direction. Regardless of how you feel or whatever connection you have to your transphobic ideas people are growing and changing and you have to change with the times as well.”

According to Fair, his biggest win of the night was the opportunity to make RICS a better place for other LGBTQ students. “Even if our school wasn’t the best for me when I got there, I want it to be 10 times better for the next person who does have to go through this,” Fair said. “It’s hard enough having to accept who you are and worrying about your family and friends. School shouldn’t be a part of you not wanting to be who you are.”

“This was a big win for the overall trans and gender nonconforming community,” Fair said. “I know that it can be hard these days. You see a lot of things on the news where a lot of gender nonconforming and LGBTQ people in general are being divided and used for political points and a lot of people are not standing with us, but for every person who doesn’t accept you there are five people who do.”