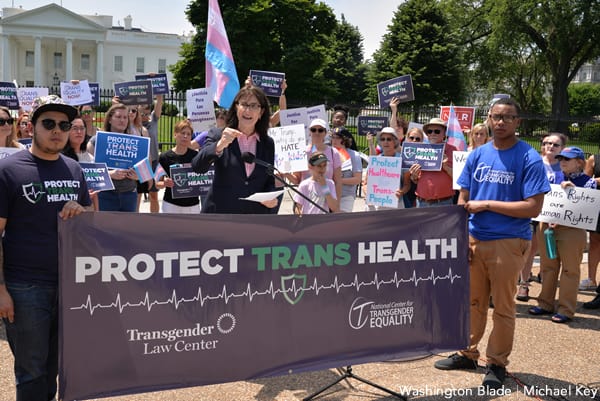 Dozens of activists gathered in front of the White House on Wednesday to protest against the Trump administration’s policies against transgender people.

The rally — organized by the National Center for Transgender Equality and the Transgender Law Center — took place less than a week after the U.S. Department of Health and Human Service announced a proposed rule that critics contend would allow discrimination in health care based on gender identity. The U.S. Department of Housing and Urban Development last week also announced a proposal that would allow homeless shelters to turn away trans people or deny them housing consistent with their gender identity.

Both proposals would overturn Obama-era policies.

“The president and his administration are fighting a war on transgender people,” said National Center for Transgender Equality Executive Director Mara Keisling. “Last week’s attack on our health care and our access to housing are only the most recent acts of cruelty meant to make our lives harder and more dangerous and even dismiss our humanity. whether it’s at work, school or in the military, the trump administration seems determined to make sure trans people never feel free to be themselves.”

“This proposed (HHS) rule is a part of a much broader attack on transgender people’s survival,” added Egyes.

Egyes at the beginning of their remarks paid tribute to three trans women of color — Michelle “Tamika” Washington of Philadelphia, Muhlaysia Booker of Dallas and Claire Legato of Cleveland — who were murdered over the last few weeks. Egyes also noted May 25 marked a year since Roxsana Hernández, a trans Honduran woman with HIV, died while in U.S. Immigration and Customs Enforcement custody in New Mexico.

The U.S. Secret Service interrupted the rally as Brown was speaking and forced participants to move from Pennsylvania Avenue, N.W., in front of the White House to Lafayette Square. The agency in a tweet said a man “lit himself on fire” on the Ellipse near 15th Street, N.W., and Constitution Avenue, N.W., at around 12:20 p.m.

At approximately 12:20 p.m. a man lit himself on fire on the Ellipse near 15th and Constitution Ave., Secret Service personnel are on scene assisting @NatlParkService and @usparkpolicepio in rendering first aid.

Activists chanted slogans that included “We won’t be silenced” and “Trump is lying, people are dying” as rally organizers set up their speakers and microphones. The rally began a short time later.

“All pedestrians around the White House complex were moved back for a short period of time due to security reasons and for personal safety,” a Secret Service spokesperson told the Washington Blade in an email.

Chris Johnson contributed to this article.