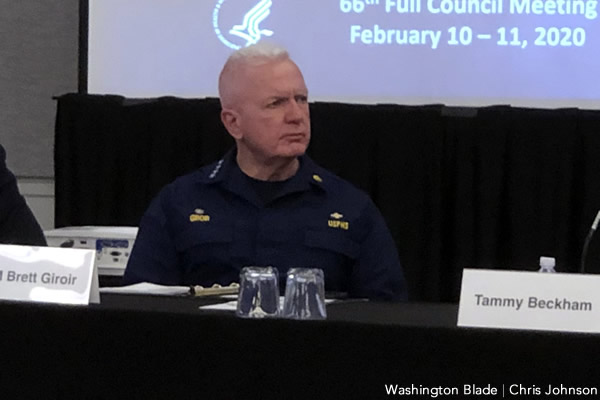 A top Trump health official, speaking with the Washington Blade this week at a meeting of the Presidential Advisory Council on HIV/AIDS, defended working with faith-based organizations to achieve the administration’s goal of beating HIV/AIDS.

Assistant Secretary of Health Rear Adm. Brett Giroir told the Blade on Monday faith-based groups are stepping up to do the job when others won’t, despite concerns those organizations refuse to treat LGBTQ people or stigmatize the disease.

“We see faith-based organizations, if they can be brought into the fold, as being tremendously helpful,” Giroir said.

As an example, Giroir cited a recent PACHA visit to Miami, where he saw a Catholic nun doing HIV testing for the Health Resources & Services Administration centers.

Giroir insisted faith-based organizations aren’t acting as administrators in the Trump administration’s initiative to beat HIV/AIDS by 2030, which relies heavily on HRSA center to administer PrEP-centric prevention and HIV treatment.

“If you want to decrease stigma and make an important statement, have your nun from your parish doing that,” Giroir told the Blade. “We’re not having faith-based organizations administer it, but to the degree that faith-based organizations can say we love everyone, this is a public health issue, please come get tested, we want to be part of solution — I think that’s ultimately what we’d like to see happen when it can.”

The Blade asked Giroir about working with faith-based groups after he promoted in his presentation before PACHA “having community based organizations and when possible, and likely faith based organizations to support” the Trump administration’s HIV/AIDS initiative.

“We heard that again this morning,” Giroir said, referencing a statement made by a PACHA co-chair, “about needing to have more and more community organizations that open the door to people who want to talk about PrEP in the community, or want to talk about treatment being prevention. Again, these are themes we hear all over the place.”

Giroir defends relying on faith-based organizations to fight HIV/AIDS at a time when the Trump administration is facing criticism for changing regulations to giving them leeway in administering taxpayer-funded social services.

Carl Schmid, executive director of the HIV & Hepatitis Policy Institute and co-chair of PACHA, told the Blade after the council’s meeting on Monday the faith-based community is needed to “address HIV, particularly in the South,” citing as an example black churches.

“They must be part of the initiative,” Schmid said. “I don’t know any specifics on what other work HHS is doing but [we] will definitely keep on eye on this. Obviously they have to work with folks who are fully supportive of LGBT folks.”

Schmid cited a July 2019 PACHA meeting in Jackson, Miss., where an entire panel on faith-based groups working on HIV/AIDS was part of the program.

Speakers included Daniel Ball, faith and outreach organizer with the Human Rights Campaign, a black gay man who organizes from the LGBTQ group in the region, and Amy Nunn, a public health professor at Brown University and founder of Mississippi Faith in Action, who does church outreach in the South.

“Faith-based organizations are an important part of our nation’s social safety net,” Stacy said. “However, it is critical that they provide these government-funded services to everyone regardless of sexual orientation or gender identity. and that they do so with cultural competency. The Trump-Pence administration has been systematically undermining existing protections and allowing discrimination by religious providers. We will not be successful in ending the epidemic with these discriminatory policies.”