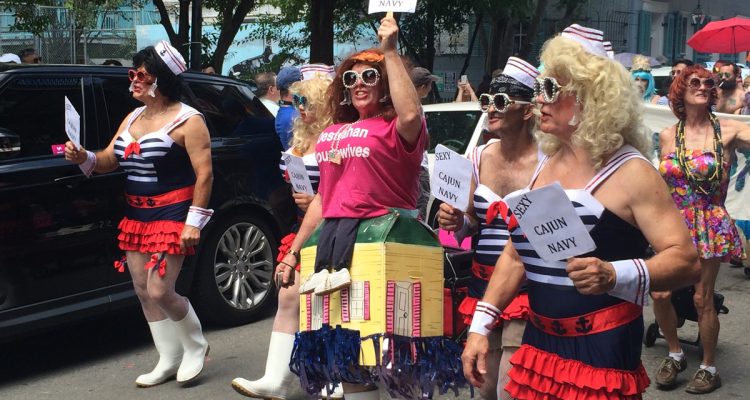 With Southern Decadence coming up, Biden health officials have given an additional 6,000 monkeypox vaccines for New Orleans. (Blade file photo by Michael Key)

At the end of a summer when the number of cases in the monkeypox outbreak rose sharply, the increase in reported infections now appears to be cresting amid increased public messaging and access to vaccines, prompting U.S. health officials to expand their strategy with a new equity-based effort to combat the disease.

Although the reported number of cases, according to most data from the Centers for Disease Control & Prevention, has reached 18,417 in the United States, the number of additional cases decreased from the high at the start of the month, suggesting a downward trajectory in the spread of the disease as vaccines become more readily available.

The numbers are also consistent with a new study finding a significant number of gay and bisexual men, as well as other men who have sex with men, have been limiting contact with casual sex partners, which has been the driving force in the spread of monkeypox. The report from the CDC last week found limiting one-time sexual encounters can significantly reduce the transmission of monkeypox virus, while about half of men who have sex with men are cutting down on sexual activity amid the outbreak, including one-night stands and app hookups.

With the trajectory of monkeypox on the decline, the Biden administration announced a new initiative with the goal of ensuring vaccine distribution is consistent with the value of equity, including on the basis of geographic, racial, and ethnic lines. A total of 10,000 doses of vaccines in the federal government’s supply will be earmarked for localities that have used 50 percent of their allocated supply to support equity interventions, such as outreach to Black and Latino communities, which have been disproportionately affected by the disease or a specific event and celebration for LGBTQ people, health officials announced Tuesday.

Demetre Daskalakis, the Biden administration’s face of LGBTQ outreach for monkeypox and deputy coordinator for the White House monkeypox task force, laid out the details for the new equity-based supplementary initiative in a conference call Tuesday with reporters.

“So what we mean by an equity intervention is what works in your state, county, or city to reach people who we may not be reaching, especially people of color and members of the LGBTQI+ population,” Daskalakis said. “What it means is: It can be working with a specific group or venue that reaches the right people for monkeypox prevention. Once these innovative strategies have been reviewed by CDC, vaccines will be supplied to jumpstart these ideas and accelerate reach deeper into communities.”

The additional equity-based approach to monkeypox vaccine distribution is consistent with the Biden administration’s efforts in recent weeks to distribute additional shots to localities hosting large-scale events for LGTBQ people at the end of the summer, such as Black Pride in Atlanta and Southern Decadence in New Orleans.

Louisiana Gov. John Bel Edwards joined the conference call with reporters on Tuesday and had high praise for the Biden administration for making the additional 6,000 doses of monkeypox vaccine available in time for Southern Decadence, which takes place in the final week of August through Labor Day weekend.

Bel Edwards said health officials in the Biden administration have, in addition to providing more vaccines, sent down multidisciplinary teams to New Orleans to help the state organize and prepare as well as set up testing and vaccination sites “that are going to be convenient for the at-risk population.”

A reporter from the New Orleans Advocate on the conference call, however, asked a pointed question on the recent distribution of vaccines to New Orleans in advance of Southern Decadence: The current approach to vaccine administration requires a series of shots, and even with new distribution most people won’t have even had their second shot by that time, so how can Southern Decadence think they will be protected, especially when vaccines take time to become fully effective?

Daskalakis, while promoting the equity-based approach to vaccine distribution, said the Biden administration has been “very clear” that first shot of the monkeypox vaccine “doesn’t mean that you’re protected for the event.”

“We’re going to talk to them about lots of other strategies that they can reduce risk of acquiring monkeypox, but also make it clear that that shot is not for today; it’s for four weeks from now, plus two weeks after that second dose when you get maximum protection,” Daskalakis said.

Although the number of cases is cresting, concern about monkeypox continues as well as the potential danger of the disease. Case in point: The death of a hospital patient in Texas who had monkeypox, but may have to succumbed to other factors, has drawn attention amid a conventional understanding the skin disease isn’t fatal. The case represents the first time in the United States that a patient with monkeypox died while having the condition.

The patient, as confirmed by the Texas Department of State Health Services on Tuesday, was an adult resident of Harris County who was “severely immunocompromised” and state health officials reviewing the case said it is under investigation to determine what role monkeypox played in the death.

Jenny McQuiston, a CDC official who specializes in research on zoological diseases that spread from animals to people, said in response to a question on the casualty that health officials are also evaluating the death and the role monkeypox played.

“I think it’s important to emphasize that deaths due to monkeypox, while possible, remain very rare,” McQuiston said. “In most cases, people are experiencing infection that resolves over time. And there have been very few deaths even recorded globally. Out of over 40,000 cases around the world, only a handful of fatalities have been reported.”

Despite the cresting in the number of cases, many health experts aren’t sold on the new approach to vaccines announced earlier this month by the Biden administration, which sought to expand existing doses of vaccines fivefold as supply hasn’t met demand. The new vaccine approach calls for injecting the JYNNEOS vaccine from the subcutaneous route (delivery of the vaccine under the fat layer underneath the skin) to the intradermal route (delivery of the vaccine into the layer of skin just underneath the top layer).

Bob Fenton, a regional administrator for FEMA and the response coordinator for the White House task force, said about 75 percent of jurisdictions have already adopted the new approach to vaccine injection, while an additional 20 percent are working toward a “fully operational intradermal method.”

“We continue to be laser-focused on doing everything within our power to help jurisdictions and clinicians get shots in arms,” Fenton said. “We’re seeing more and more jurisdictions adopt the intradermal administration.”

Data of this new intradermal approach, critics have said, is insufficient to support the idea it will be as effective as subcutaneous injections, although the Biden administration continues to give assurances the new route for injections is tested and safe. According to a report earlier this month in the Washington Post, the manufacturer of the JYNNEOS vaccine in Denmark, Bavaria Nordic, privately threatened to cut off supply of the shots based on a conversation with health officials on objections the vaccine hasn’t been approved for intradermal use.

“CDC operates a system called VAERS — or the Vaccine Adverse Event Reporting System — and we’re actively looking at…different types of events that might be reported post-vaccination,” McQuiston said. ” And we are actively gathering information from the different jurisdictions and states and cities about which vaccines they’re administering — whether it’s subcutaneous or intradermal — and we are gathering those data now, as we speak.”