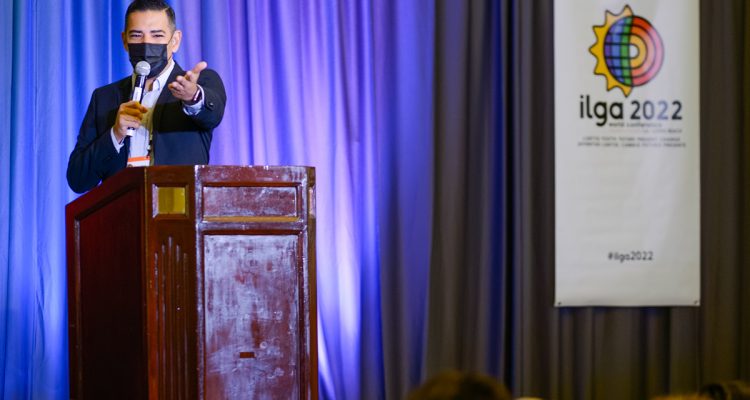 Long Beach, Calif., Mayor Robert Garcia speaks at the ILGA World conference in Long Beach, Calif., on May 2, 2022. Garcia is one of the 104 openly LGBTQ people who have either run for Congress or are currently congressional candidates in the 2022 election cycle. (Photo courtesy of Andy Perez/ILGA World)

Victory Fund Notes Increase in Out LGBTQ Congressional Candidates in 2022

As the 2022 midterm elections draw near, a record number of LGBTQ candidates have been running for Congress. But while some segments of the community have made gains in political presence, other metrics are falling short when it comes representation that is reflective of the U.S. population.

New data from the LGBTQ Victory Fund notes 104 openly LGBTQ people have run or are currently running for congressional seats this cycle. This figure is up from 87 candidates who ran for such offices in 2020.

Victory Fund Press Secretary Albert Fujii told the Washington Blade that, in the face of threats such as recent and impending U.S. Supreme Court decisions that could have wide-ranging implications for LGBTQ rights, achieving such representation is of paramount importance.

“The 11 LGBTQ members of Congress currently serving punch way above their weight and have delivered meaningful results for our community time and time again, despite being woefully outnumbered,” Fujii said. “But with a Supreme Court hell bent on choosing politics over precedent, our congressional champions desperately need backup to ensure our fundamental human rights are not rolled back to a time when bigotry was the law of the land.”

As races now stand, 57 LGBTQ candidates remain on the ballot for congressional seats in November.

The mounting presence of LGBTQ people who are running for office is mirrored by a growing share of community members participating in the national electorate.

In 2018, an election cycle that was dubbed by many as a “rainbow wave” for LGBTQ representation in government offices, a record number of out candidates were elected to positions across the country. LGBTQ voters similarly reached a new height of electoral visibility, making up 6 percent of the overall electorate. Just two years later, the share of LGBTQ voters rose to seven percent of all Americans who voted in 2020.

“In 2018 and 2020, millions of people of all backgrounds and races showed up to cast their votes in record numbers, electing a historic number of women, people of color and LGBTQ+ leaders,” Human Rights Campaign Interim President Joni Madison said in a statement endorsing re-election for the nine current LGBTQ House members. “We must once again mobilize in even larger numbers to re-elect these members of Congress that will champion equality.”

Nearly 45 percent of LGBTQ congressional candidates still running in the 2022 cycle are people of color, reflecting national movements in recent years to push back against suppression of voters and voices of both people of color as well as intersectional communities. The number also reflects 2019 data from the University of California, Los Angeles, that found 42 percent of people who identify as LGBTQ in the U.S. are people of color.

In other ways, however, the current field of LGBTQ candidates falls short of relative representation for certain segments of the community.

In a Congress that has not seen any member of the transgender community be elected to either chamber, the Victory Fund’s data shows that only about four percent of LGBTQ candidates still running identify as trans. The number falls under the 10 percent of LGBTQ adults in the U.S. that identified as trans in a February Gallup poll and comes amid legislative attacks on trans youth across the country.

But as midterm primaries approach throughout the coming months, groups like the Victory Fund remain persistent in their efforts to reach what they see as adequate levels of congressional representation for LGBTQ Americans.

“Gaining equitable representation in Congress would not only increase our political power and increase the odds our rights are finally codified into federal law, it would send a crystal clear message that anti-LGBTQ vitriol will not prevail,” Fujii said. “Until then, we are proud to keep building a bench of highly qualified LGBTQ leaders.”