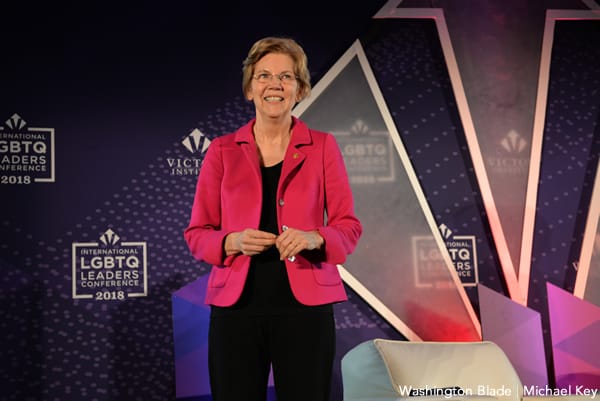 Transgender advocates cheered Elizabeth Warren for coming out this week in favor of transgender inmates having access to gender reassignment surgery, which could potentially raise it as an issue for 2020 presidential candidates.

Warren’s new view reverses a position she stated in 2012 in opposition to access to the transition-related care for inmates. Even thought it took seven years for Warren to change her position and she only did so after she declared her intention to run for president, transgender rights supporters welcomed her evolution and newfound position.

“I have always believed that our goal as Americans and activists is to persuade others to understand and then join us,” Beyer said.

Beyer added, “For many people, including many trans people I know, there is little desire to support anyone in prison, particularly those who are constitutionally entitled to health care in prison to which they themselves are not entitled.”

In a statement first reported by ThinkProgress on Monday and later obtained by the Washington Blade, a spokesperson for the Warren exploratory committee said Warren believes transgender people should have access to gender reassignment surgery, including at correctional facilities.

That statement reverses a position Warren articulated when in 2012 she was challenging then-Sen. Scott Brown for his seat representing Massachusetts in the U.S. Senate.

“Sen. Warren supports access to medically necessary services, including transition-related surgeries,” the spokesperson said. “This includes procedures taking place at the VA, in the military or at correctional facilities.”

During an interview with WTKK-FM, Warren was asked about a federal judge ordering Massachusetts to grant gender reassignment surgery to Michelle Kosilek, a convicted killer in federal prison.

“I have to say, I don’t think it’s a good use of taxpayer dollars,” Warren said at the time.

Transgender advocates have made the case that transgender inmates are entitled to receive the taxpayer-funded procedure because denying them medical treatment amounts to cruel and unusual punishment — a clear violation of the Eighth Amendment of the U.S. Constitution.

For years after Warren was elected to the U.S. Senate, the Blade has placed requests with her office seeking comment on whether she misspoke or changed her mind on the issue, especially at at time when gender reassignment surgery emerged as a hot topic in transgender rights. As of 2015, Warren hadn’t responded to the Blade’s repeated requests for comment.

Mara Keisling, executive director of the National Center for Transgender Equality, said she spoke with Warren in the aftermath of the 2012 remarks and is pleased with the change.

“We reached out to Sen. Warren after the 2012 incident, and I have spoken with her several times since,” Keisling said. “She has taken the time to listen, learn and evolve. We’re pleased that she has affirmed her support for the Eighth Amendment right to adequate health care while in prison.”

The statement from Warren is also notable for expressing support for access to gender reassignment surgery through care from the Department of Veterans Affairs and the U.S. military.

The Department of Veterans Affairs currently doesn’t include coverage of gender reassignment surgery as part of its medical care. Litigation filed by Lambda Legal is pending before the U.S. Federal Circuit Court of Appeals challenging that exclusion.

Currently, the U.S. military provides gender reassignment surgery for transgender troops as a result of court orders barring President Trump from enforcing his ban on transgender people in the armed forces. However, Trump’s ban seeks to bar the U.S. military from paying for the procedure and would go into effect if courts decide to uphold the ban on appeal.

In terms of the 2020 election, the statement could also raise transgender rights as an issue among the Democratic contenders seeking to unseat Trump, especially when compared to the record of Sen. Kamala Harris (D-Calif.).

According to Harris’ office, the California Democrat sought to bring the litigation to a conclusion that included a permanent change in state prison policy on the treatment of transgender inmates.

Jillian Weiss, a transgender lawyer with a practice in LGBT employment discrimination, noted the new distinction between Harris and Warren and welcomed the Massachusetts Democrat’s change of heart.

“I’m glad to hear that Sen. Warren has reversed her previous position on this issue, unlike Kamala Harris, also mentioned as a potential candidate,” Weiss said. “It is a sign that Sen. Warren could potentially be a true champion for LGBT rights. I note that many people had questions about President Obama’s commitment to LGBT issues. As he evolved, his became the most LGBT-friendly administration in history, changing trans lives dramatically for the better. I hope to hear more from Sen. Warren about the many issues affecting the lives of trans people.”