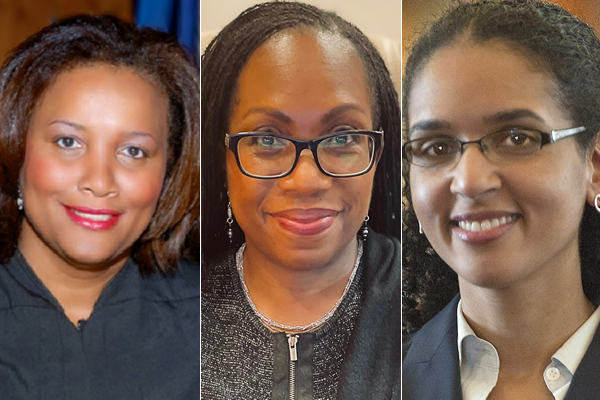 With another battle over the U.S. Supreme Court underway after the announced retirement of U.S. Associate Justice Stephen Breyer, progressives have a chance to make an imprint on the judiciary with the nomination of the first Black woman as promised by President Biden — and their past actions and statements on LGBTQ issues may factor into the confirmation process.

The three Black women most talked about as potential choices — D.C. Circuit Judge Ketanji Brown Jackson, U.S. District Judge J. Michelle Childs of South Carolina and California Supreme Court Justice Leondra Kruger — have each made statements or undertaken past work related to issues facing the LGBTQ community, and they’re not all positive, despite the reliable reputation they’ve all built in the progressive legal community.

Ketanji Brown Jackson, who’s considered to be closely aligned with Breyer after having clerked for him between 1999 and 2000, is seen as a hero in the progressive community for her previous work as a public defender. But she once worked as an adviser for a Baptist school in the Maryland suburbs that had a mission statement against LGBTQ people and abortion.

The now-defunct school, known as Montrose Christian School, had a statement on its website condemning homosexuality and abortion consistent with its religious views, as documented by the conservative Washington Examiner at the time of Jackson’s confirmation process for her current seat on the D.C. Court of Appeals.

The mission statement urged students to uphold a “Christian character,” which among other things in the views of the school, meant they should oppose “all forms of sexual immorality, including adultery, homosexuality, and pornography.” Abortion is also implicitly condemned in the mission statement: “We should speak on behalf of the unborn and contend for the sanctity of all human life from conception to natural death.”

If nominated, conservatives smarting from attacks on now U.S. Associate Justice Amy Coney Barrett during her confirmation process over her ties to religious groups with anti-LGBTQ views, as well as her affiliation with the anti-LGBTQ legal group Alliance Defending Freedom, may cynically highlight Jackson’s past affiliation with the school as a reason to attack her or progressives as hypocrites for not opposing her confirmation.

Jackson addressed her past work with the school during the confirmation process for her current job in response to questions from Sen. Richard Durbin (D-Ill.) on her past work, maintaining her role on the advisory board for Montrose Baptist Church was limited and she was unaware of its position statement.

“I was aware that Montrose Christian School was affiliated with Montrose Baptist Church,” Jackson said. “I was not aware that the school had a public website or that any statement of beliefs was posted on the school’s website at the time of my service. My service on the advisory school board primarily involved planning for school fundraising activities for the benefit of enrolled students. I did not receive any compensation for my service.”

Trying to predict the bent of potential justices on LGBTQ issues, or any issue, through the lens of previous isolated actions or past work can be difficult, even based on the party of the president who’s making a selection for the U.S. Supreme Court. As an example, U.S. Associate Justice Neil Gorsuch upon nomination by former President Trump was hailed by conservative groups and vehemently opposed by LGBTQ groups, but ended up writing the majority opinion last year in Bostock v. Clayton County against anti-LGBTQ discrimination. Similarly, U.S. Associate Justice Elena Kagan during her confirmation process for her previous role as solicitor general said in written responses to questions that no right for same-sex couples to marry has been found in the U.S. Constitution, but ended up joining rulings for same-sex marriage in Windsor v. United States and Obergefell v. Hodges.

Nan Hunter, an emeritus law professor at Georgetown University who has written about LGBTQ issues, downplayed in an email to the Blade Jackson’s affiliation with Montrose Christian School as evidence she would be hostile to LGBTQ people as a Supreme Court justice.

“Judge Jackson apparently volunteered for a year to help raise money for student services at a Christian school in the D.C. suburbs,” Hunter said. “There is no indication anywhere in her professional record or personal experience that she shares anti-gay views. In my opinion, her lifelong commitment to equality more than outweighs any concern that she might be biased against LGBT rights.”

Another potential Biden pick, J. Michelle Childs, the South Carolina judge with the potential for bipartisan support after being recommended by both Rep. Jim Clyburn (D-S.C.) and Sen. Lindsey Graham (R.S.C.), has had a more direct on impact on issues facing LGBTQ people.

As a trial judge, Childs was presented in 2014 with litigation seeking marriage rights for same-sex couples in South Carolina. Although Childs as part of the litigation process rejected a request to make the lawsuit more broad and serve as vehicle for same-sex couples to obtain marriage licenses, she found South Carolina was required to honor the same-sex marriages of two lesbian couples performed in other states. Childs based on her decision on a then-recent decision from the U.S. Fourth Circuit Court of Appeals, which struck down the marriage ban in Virginia and guided her as precedent in her state.

“Because marriage is a fundamental right, South Carolina’s marriage laws are subject to strict scrutiny and survive only if they are narrowly tailored to a compelling government interest,” Childs wrote in her decision. “Based on the foregoing, the court finds that South Carolina’s marriage laws are not narrowly tailored to serve a compelling state interest as they impermissibly infringe on plaintiffs’ fundamental right to marry. Therefore, after careful consideration of the parties’ respective positions, the court finds that Plaintiffs have established the violation of their rights protected by the Due Process Clause of the Fourteenth Amendment and, as a result, they are entitled to summary judgment on their due process claims.”

Leondra Kruger, as a member of the California legal community, has also directly engaged with the LGBTQ community and was a keynote speaker in 2019 for the annual dinner for the Tom Homann LGBT Law Association, a San Diego-based affinity group for LGBTQ lawyers. The Blade this week reached a member of leadership of the association for comment on Kruger’s participation at the dinner.

In terms of legal work on LGBTQ issues, Kruger worked in the office of the U.S. Justice Department during the Obama administration and her name was under U.S. Solicitor General Donald Veriilli among the signed briefs in litigation in California against the anti-LGBTQ Defense of Marriage Act known as Golinski v. Office of Personnel Management.

Kruger’s contribution to the work in the Obama administration against DOMA, which the Supreme Court struck down in 2013, is articulated in a petition before the high court seeking review of litigation challenging the law for prohibiting federal recognition of same-sex marriages.

“Section 3 of DOMA denies to same-sex couples le­gally married under state law significant federal bene­fits that are otherwise available to persons lawfully mar­ried under state law. Because such differential treat­ment bears no substantial relationship to any important governmental objective, Section 3 violates the guarantee of equal protection secured by the Fifth Amendment.”

A queer Black woman for the bench?

Although not named in the media as among the Black women who are the major potential choices, the idea of Biden naming a pick who’s both a Black woman and queer has emerged in the advocacy community. The LGBTQ Victory Institute, which trains and seeks the appointment of LGBTQ people in federal government, has openly recommended Washington State Supreme Court Judge G. Helen Whitener to serve as Breyer’s replacement.

If Biden sought to name a queer Black woman who sits on the federal judiciary, another choice could be U.S. District Judge Staci Michelle Yandle of Illinois, an Obama-appointed judge confirmed in 2014.

One LGBTQ strategist, who spoke on condition of anonymity for greater candor, said communications with the White House have taken place on naming a queer Black woman to the Supreme Court and “there’s not been a commitment, but there hasn’t been a not-commitment.”

“I think the last year shows a really strong commitment to the LGBTQ community and having representation from our community across the administration, and so they were happy to see us surfacing qualified names of Black LGBTQ women,” the strategist said.

The White House didn’t respond to the Washington Blade’s request for comment Wednesday on how LGBTQ issues may be factoring into Biden’s selection process for the Supreme Court.

Talk of a potential queer Black woman pick for the Supreme Court comes at a time when the LGBTQ legal group Lamdba Legal has issued a report on the dearth of LGBTQ people on the judiciary. According to the report, compared to estimates 5.6 percent of Americans who identify as LGBTQ, only 1.6 percent of the federal judiciary identifies as such. As of January 2022, that includes 11 openly lesbian or gay federal district court judges and three openly lesbian or gay judges in the federal circuit courts. There has never been an openly transgender, nonbinary, or bisexual nominee in the history of the judiciary, the report finds.

Scarcity of LGBTQ people, the report finds, is also present among Biden’s choices to fill vacancies on the court despite his pledge to value diversity, although that percentage appears more consistent with the population at large. Among the 81 Biden nominees, six percent are openly gay or lesbian, the report finds.

Sharon McGowan, legal director of Lambda Legal, said in a statement based on the report the current state of the federal judiciary “fails to reflect the diversity of the nation it serves, a reality that has devastating, real-life consequences for those on the margins of society,”

“The nomination and confirmation of more openly LGBTQ+ judges must be a priority for the Biden administration in order to enhance the quality of judicial adjudication and improve the credibility of the federal judiciary as a whole,” McGowan added.

LGBTQ legal groups, for their part, appear at this stage to be taking a wait-and-see approach to Biden’s potential choice and not weighing in with conclusions on any reviews of their backgrounds. Lambda Legal, for example, indicated via a spokesperson the organization is “doing our analysis now, but don’t have any comments to make on the subject as of yet.”

Christopher Vasquez, spokesperson for the National Center for Lesbian Rights, said via email to the Blade the organization has yet to begin its evaluation, but has faith in the Biden administration on its eventual choice.

“NCLR has not yet evaluated any potential Supreme Court nominees to replace Justice Breyer,” Vasquez said. “However, during his first year in office, President Biden has shown a strong commitment to appointing judicial nominees who are pro-equality and represent the full diversity of the United States. We look forward to evaluating the president’s nominee when he names them and are confident he will choose a justice who is dedicated to LGBTQ equality as well as racial, gender, and economic justice, and has an unwavering commitment to democracy and the rule of law.”