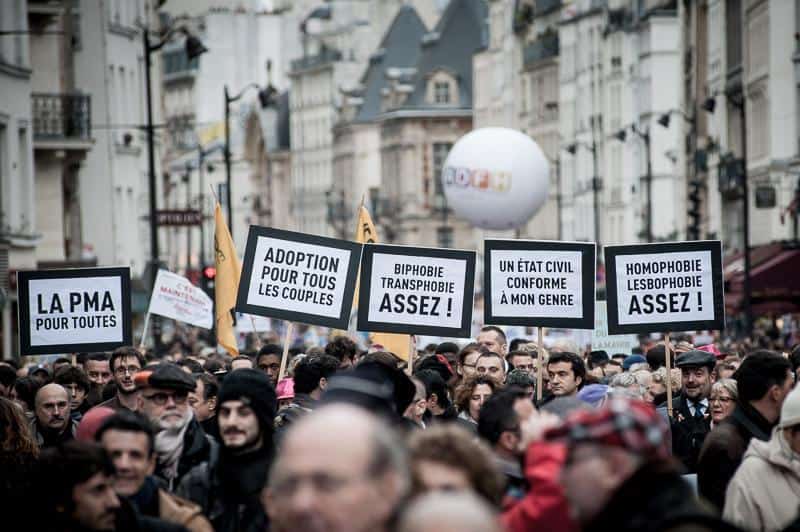 However, that victory was bittersweet: the number of French homophobic acts increased after legalization.

The French gay-rights organization, SOS Homophobie, monitors the levels of homophobia in France. According to a report, the number of recorded homophobic acts increased by 78 percent in 2013. According to the document, the same year that same-sex marriage was legalized, a homophobic assault took place in France every two days.

A man named “Maxime” was one of the many victims of homophobic assaults. An attacker sliced his head with a box cutter and called him derogatory slurs. Even when Maxime was rushed to the hospital, a person mocked him because he was carrying a handbag. Maxime was told that he should have know that an incident would happen.

Maxime also tried to file a complaint, but none of the male officers helped him. He received help from a female officer, but she said he ought to blame himself for dressing “too gay.”

In an interview, Maxime discussed the crime and told the interviewer, “Twenty years ago, gays had to stay invisible, but now, we have a lot of visibility. In some ways, it’s a huge leap forward, but it’s also sparked a much more violent and present homophobia.”

Several years later, France still maintains consistency in homophobic assaults. According to a 2017 annual report by SOS Homophobie, the number of homophobic physical attacks rose from 121 in 2016 to 139 in 2017.

Continuing with the same report, the organization stated it received 1,575 testimonies of anti-LGBTQ acts in 2016.

Victims of homophobic acts were mostly men (58 percent) and young people under 35 (56 percent). Reported actions of homophobia consisted of people visibly showing their disapproval of homosexuality with the inclusion of discrimination, harassment, threats, and blackmail.

In October 2016, France adopted the first gender recognition law. The new law was to help the trans community, because proof of medical treatments were not a requirement for a person to have their documents legally reflect who they were.

However, advocates for the recognition law say it does not go far enough.

TGEU Steering Committee member Clémence Zamora-Cruz believes the adopted law opened up problems of judgment, stating: “This procedure does not adopt full self-determination, and therefore continues to give judges a central role in determining and accepting the validity of an applicant’s gender identity. It is also particularly painful that young persons will continue to be barred from having their gender identity recognized in France.”

During the year that the gender recognition law was adopted, reported transphobic incidents received a 76 percent spike.

In the face of increased homophobic assaults, SOS Homophobie pledges that they will fight back.

“We will continue supporting and advising victims of homophobia and transphobia, who are often helpless in face of the violence they have been subjected to,” the organization stated in their 2017 annual report. “With our prevention work in schools and businesses we will raise awareness about the mechanisms of rejection and intolerance by deconstructing stereotypes, which are often at the root of despicable behaviour.”