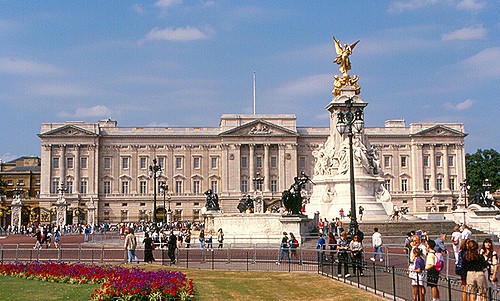 Gay marriage was legalized in the UK in 2014. Mountbatten came out publicly in 2016, according to Insider.

At the wedding, Mountbatten’s ex-wife Penny gave him away. The two divorced in 2011 and have three daughters. Penny told the Daily Mail that it was “the girls’ idea.”

“It makes me feel quite emotional,” she said. “I’m really very touched.”

Mountbatten thanked his children in an Instagram caption of one of the wedding photos. “A massive thanks to my 3 gorgeous girls for being so understanding and supportive,” he wrote. “Without their support this could never have happened!”

The celebration was held on a rainy day on Mountbatten’s country estate in Devon. “It was an amazing day despite the miserable British weather,” he wrote.

“It’s a very modern marriage,” Coyle told the Daily Mail. “There was no proposal, just an acceptance of this great love. He Cares. I care. The girls are very accepting.”

Earlier this year, Mountbatten told the Daily Mail, “For me, what’s interesting is I don’t need to get married because I’ve been there, done that and have my wonderful children; but I’m pushing it because I think it’s important for [James].”

“Growing up in Glasgow was challenging for James,” Mountbatten elaborated. “He once overheard his father, who was a strict Catholic, calling him ‘the queer one.’”

Mountbatten went on. “James hasn’t had the stable life I have.” He then turned to his partner. “I want to be able to give you that,” he said.

The two met in the Swiss ski resort town of Verbier. “When I met James,” Mountbatten said, “I thought, ‘This is exactly the route I want.’ We want to grow old together.”

Mountbatten noted the strain his hidden sexuality had on his previous marriage. “Certainly, without doubt, most gay blokes my age would prefer to be heterosexual,” he said. “First of all, there’s the suppression of it and disbelief. Then there’s denial.”

Penny also noted the strain. “He probably wasn’t even aware that by keeping his sexuality a secret it was really quite tormenting him.”

“I had a really happy childhood but I could never tell my parents I was gay,” he said. But when he brought up the idea of the marriage to his eldest daughter she replied, “Oh Pap, it’s not a big deal. It’s so normal nowadays.”