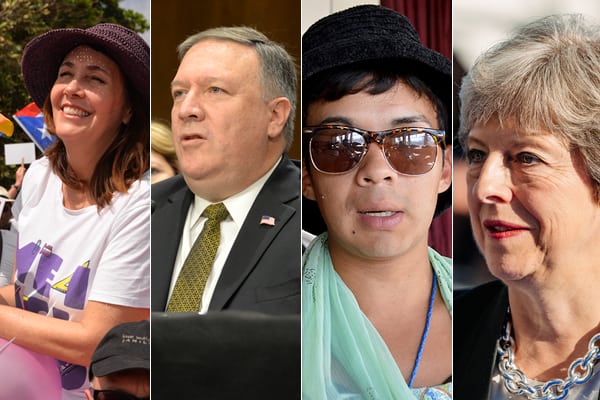 A referendum on whether to define marriage as between a man and a woman in the Romanian constitution’s definition of family failed in October because of insufficient voter turnout.

Less than 21 percent of voters participated in the referendum.

Kim Davis, a soon-to-be-former Kentucky county clerk who went to jail in 2015 for refusing to issue marriage licenses to same-sex couples, is among those who backed the campaign in support of the proposed amendment. Mihnea Florea, program coordinator of MozaiQ, a Romanian LGBTI advocacy group, is among those who welcomed the referendum results.

The election of Jair Bolsonaro as Brazil’s president has sparked fear among the country’s LGBTI community.

Bolsonaro defeated former São Paulo Mayor Fernando Haddad of former President Luiz Inácio Lula da Silva’s Workers’ Party by a 55-45 percent margin in the second round of the country’s presidential election that took place on Oct. 28. Bolsonaro, who has represented Rio de Janeiro in the Brazilian congress for 27 years, will take office on Jan. 1.

Bolsonaro has sparked widespread outrage for his comments against the LGBTI community, women, indigenous people, Brazilians of African descent and other underrepresented groups. Bolsonaro has also said he would defend the “true sense of marriage” between a man and a woman once he takes office.

The U.S. in 2018 continued to publicly support LGBTI rights abroad, even though its domestic record has continued to spark criticism.

The State Department this year criticized anti-LGBTI crackdowns in Tanzania. Secretary of State Mike Pompeo in June acknowledged Pride month in a statement. Deputy Secretary of State John Sullivan is among the U.S. officials who participated in a global LGBTI rights conference that took place in the Vancouver, British Columbia.

A new State Department policy that requires partners of foreign mission personnel and employees of international organizations to be married in order to qualify for a diplomatic visa took effect on Oct. 1. Family Research Council President Tony Perkins is among those who took part in a religious freedom conference the State Department held in July.

Bermuda in June became the first jurisdiction in the world outside the U.S. to rescind marriage rights for same-sex couples.

John Rankin, the governor of the British island territory, on Feb. 7 signed the Domestic Partnership Act, which allows same-sex couples to enter into domestic partnerships as opposed to get married. The law, which prompted calls to boycott Bermuda’s tourism industry, took effect on June 1.

“I am all too aware that these laws were often put in place by my own country,” she said during a speech at the Commonwealth summit that took place in London. “They were wrong then, and they are wrong now. As the U.K.’s prime minister, I deeply regret both the fact that such laws were introduced and the legacy of discrimination, violence and even death that persists today.”

Consensual same-sex sexual relations remain criminalized in a number of the Commonwealth’s 53 countries.

A referendum on whether same-sex couples should receive marriage rights in Taiwan failedon Nov. 24.

Voters by a 67-33 percent margin rejected a question on whether same-sex couples should receive marriage rights through Taiwan’s civil code. Questions on whether marriage in Taiwan should be defined as between a man and a woman and whether same-sex couples should be able to enter into civil unions or domestic partnerships, as opposed to marriages, passed by margins of 72-28 percent and 61-39 percent respectively.

Evan Wolfson, founder of Freedom to Marry, is among those who supported Taiwanese activists before the referendum. The National Organization for Marriage backed marriage opponents.

Lawmakers still face a May 2019 deadline to extend marriage rights to same-sex couples under a Taiwan Constitutional Court ruling from two years before.

The Inter-American Court of Human Rights on Jan. 9 issued a landmark ruling that recognizes same-sex marriage and transgender rights in the Western Hemisphere.

The ruling stems from the Costa Rican government’s request for an advisory opinion on whether it has an obligation to extend property rights to same-sex couples and allow trans people to change their name and gender marker on identity documents. The Costa Rican government has said it will comply with the ruling, which has bolstered advocacy efforts throughout the Western Hemisphere.

Margarette May Macaulay, president of the Inter-American Commission on Human Rights, on Dec. 5 reiterated her support of marriage rights for same-sex couples during a hearing on the subject over which she presided in D.C. The Chile Supreme Court on the same day issued a ruling that said marriage for same-sex couples is a human right, but the country’s president, Sebastián Piñera, continues to face criticism from advocates over his opposition.

Cuban lawmakers on July 22 approved the draft of a new constitution that would extend marriage rights to same-sex couples.

A series of public meetings on the proposed constitution took place across the Communist island over the fall. The Cuban National Assembly in the coming weeks is expected to give its final approval to the document. A referendum is scheduled to take place in February.

The debate over the proposed constitutional changes is taking place nearly 60 years after gay men were among those sent to work camps after the Cuban revolution brought Fidel Castro to power. His niece, Mariela Castro, over the last decade has spearheaded LGBTI-specific issues in the country.

Independent activists with whom the Washington Blade speaks insist they continue to face criticism and even arrest for publicly criticizing Mariela Castro and/or the Cuban government.

The waves of migrants who have left Central America in 2018 include people who are fleeing violence and discrimination based on their sexual orientation and gender identity in their homelands.

The migrants — many of whom have traveled to the U.S. border in caravans — still hope to enter the U.S., despite President Trump’s “zero-tolerance” immigration policy that has sparked widespread criticism. The death of Roxsana Hernández, a trans Honduran woman with HIV, in U.S. Immigration and Customs Enforcement custody on May 25 sparked additional outrage among immigrant rights activists and their supporters.

The India Supreme Court on Sept. 6 issued a landmark ruling that decriminalized consensual same-sex sexual relations in the country.

The unanimous ruling specifically struck down India’s colonial-era sodomy law known as Section 377. LGBTI rights advocates in India and around the world not only celebrated the decision, but stressed it will bolster efforts to decriminalize homosexuality in other Commonwealth countries.

“We rejoice with all sexual, gender and sex minorities communities in India,” said Ruth Baldacchino and Helen Kennedy, co-secretaries general of ILGA, in a statement.  “As of today, a shameful part of an enduring colonial legacy is finally history. We hope that this ruling, which was made possible by the tireless work of many human rights advocates, will have an impact also on other countries around the world where our communities continue to live under the shadow of oppressive criminal laws, especially those that share a common legal heritage with India, as far afield as Africa, the Pacific and Caribbean.”

A judge on Trinidad and Tobago’s High Court in April struck down the country’s colonial-era sodomy law. The Kenya High Court early next year is expected to issue a ruling in a case that challenges a portion of the country’s penal code that criminalizes consensual same-sex sexual relations.