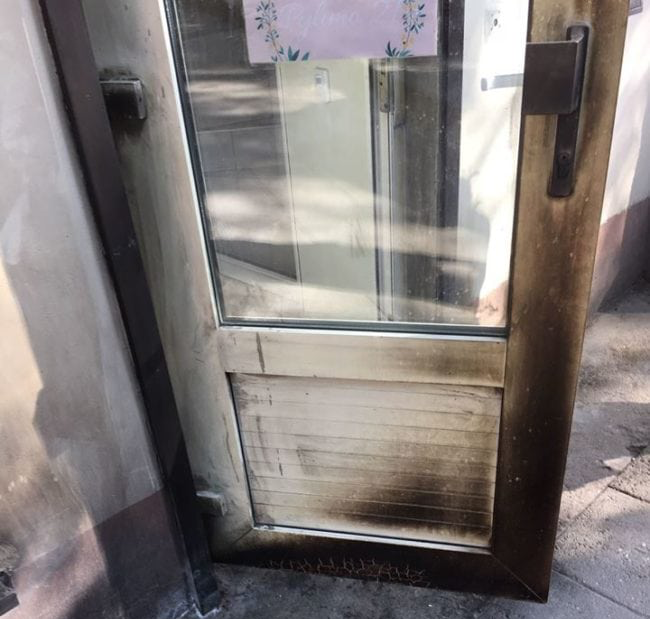 On Friday morning at 4 a.m (August 10), a twenty-five year old LGBT organization in Lithuania was attacked by an unknown arsonist.

According to members of the Lithuanian Gay League (LGL), the entrance to their office was hit by an unidentified flammable substance, which caused damage to the exterior door and its blinds. Eglė Kuktoraitė, the organization’s communications coordinator, arrived on the scene to find the targeted areas badly burned. The fire was put out by a passing taxi driver, who responded to the flames using a portable fire extinguisher before the arrival of the police and emergency fire rescue services on the scene.

The incident has been described by LGL members as being a “vicious homophobic attack,” citing the organization’s shared space with a clothing store on the building’s lower floor—as well as the ubiquity of its rainbow-themed decor and proximity to the nearby LGBT-themed rainbow crosswalk—as evidence toward this claim. In a statement released to Pink News, Vladimir Simonko, executive director of the League, stated that sexuality and gender identity-related hate crimes remain an “important issue” in present-day Lithuania.

The LGL’s office is located on Pylimo in Vilnius, Lithuania’s capital city. At present, the Lithuania Gay League is the only organization in Lithuania claiming to represent the LGBT population without holding any government affiliation. While the incident is still under investigation, and the culprit is still at-large, the attack on the League is one of many highly-visible and undeniably interconnected turns of events in Lithuania ’s record of LGBT-related affairs.

On May 17, 2017, Lithuania’s Parliament marked the International Day Against Homophobia, Transphobia, and Biphobia; roughly a month later, Lithuania’s parliament voted against a proposal to legalize same-sex partnerships without the possibility for revision. Despite this apparent loss, however, some Lithuanian activists have chosen to see the vote’s results (29 yes, 79 against/abstained) as evidence of slowly-growing support for members of the LGBT community, as reported by Gay Star News.

“This was done out of hatred,” Kuktoraitė told the news site, before going on to explain how homophobic incidents in Lithuania are typically labeled “acts of hooliganism” rather than as targeted and intentional violence. The LGL expressed on Twitter and in their initial press release the intent to apply their concerns about the likelihood of the incident being a hate crime to Vilnius County’s third police department.

Later updates, however, indicated that the Lithuanian police classified the pre-trial investigation as an act of vandalism. According to the LGL, the police department’s official spokesperson was further questioned by a Lithuanian journalist, and the spokesperson eventually revealed that he was unfamiliar with “hate crimes” as a concept.

Since the attack, the LGL has been on the receiving end of messages conveying support for their organization and solidarity in the face of targeted attacks. As seen in one of the organization’s most recent tweets, Monday morning brought a message of “love and courage” alongside as the arrival of a symbolic bouquet from Amnesty Denmark. “Stay strong,” the letter read. “Love and rainbows from Denmark.”