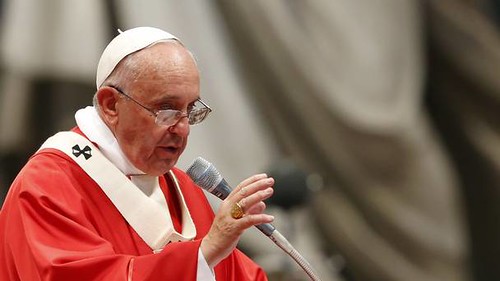 In a development that Catholic Church observers consider to be unprecedented, a high-level Vatican official apologized last week to LGBTQ people and to the Mt. Rainier, Md., based LGBTQ Catholic group New Ways Ministry for removing from a Vatican open forum website a link to an LGBTQ supportive video on New Ways Ministry’s website.

The apology by Thierry Bonaventura, communication manager of the Vatican-based General Secretariat of the Synod of Bishops, came five days after New Ways Ministry released excerpts from two letters that Pope Francis sent to New Ways Ministry in May and June of 2021 praising the organization for its work in support of LGBTQ Catholics.

According to the National Catholic Reporter, conservative Catholic media outlets reported that Bonaventura removed the link to the New Ways Ministry video from the Synod’s website on Dec. 7 after he learned that the U.S. Conference of Catholic Bishops censured New Ways Ministry in 2010 because of its support for civil marriage for same-sex couples.

Supporters of New Ways Ministry believe Bonaventura may have issued his apology and subsequently reposted the video link to the Synod website after learning that the Pope himself had expressed a favorable opinion of New Ways Ministry in his recent letters to the LGBTQ ministry.

Francis DeBernardo, executive director of New Ways Ministry, said in a statement that the New Ways Ministry video, among other things, encourages LGBTQ people to participate in Synod consultations. The Synod provides advice to the Pope on a wide range of church-related matters.

DeBernardo said it was someone from the Vatican, not New Ways Ministry, who placed the link to the LGBTQ group’s video on the Synod’s website.

“In recent days, I have personally taken the initiative to de-publish a post promoted by the reality ‘New Ways Ministries’ for internal procedural reasons,” Bonaventura says in his apology, which he posted on Facebook. “This brought pain to the entire LGBTQ community who once again felt left out,” he said.

“I feel I must apologize to all LGBTQ people and to the members of New Ways Ministries for the pain caused,” Bonaventura said. He added that he reposted the link to the New Ways Ministry video on the Synod website. He also posted in his Facebook message a link to the Synod’s resources web page, suggesting that LGBTQ Catholics should submit messages on the site.

“Certainly, LGBTQ groups and those groups who feel they live on the ‘margins’ of the Church can direct their contributions, resources, or what they want to share with the whole people of God to [this website],” he wrote.

“New Ways Ministry warmly accepts the apology of Thierry Bonaventura,” DeBernardo said in a Dec. 13 statement. “Apologies are powerful in their ability to build bridges of reconciliation and justice,” DeBernardo said. “Mr. Bonaventura’s kind words and his reposting of the video will be effective in helping to repair the rift that exists between LGBTQ people and Catholic institutions,” he said.

“We appreciate that apologies are never easy to make,” DeBernardo continued. “New Ways Ministry had not requested one, making this gesture all the more authentic,” he said. “Vatican officials rarely apologize, and they almost certainly have never apologized to LGBTQ people or an LGBTQ Catholic Ministry,” said DeBernardo.

“This action signals that Vatican officials are becoming aware of how their decisions impact LGBTQ lives,” he said. “It also reveals a desire to repair damages they may have caused. In these respects, this is an historic moment.”

DeBernardo said Pope Francis’s two letters to New Ways Ministry came in response to messages that he sent to the Pope discussing problems LGBTQ people and New Ways Ministry have faced with Catholic Church officials, including the Vatican.

“We wrote to the Pope in April, introducing ourselves as an organization, providing him with a brief history, including two major censures by church officials,” DeBernardo told the Blade.

Among the issues he said his group raised with the Pope was a 1999 decision by the Vatican’s Congregation of the Doctrine for the Faith to prohibit the two co-founders of New Ways Ministry – Sister Jeannine Gramick and Father Robert Nugent – from engaging in pastoral work with gay people.

The National Catholic Reporter, which published a story about the Pope’s letters to New Ways Ministry, reports that the 1999 action against Gramick and Nugent was based on claims by Vatican officials that the two LGBTQ supporters promoted “ambiguities and errors” in their ministerial work.

The newspaper, which operates independently from the Catholic Church, points out in a Dec. 8 story that the notification sent to Gramick and Nugent prohibiting them from providing pastoral support for homosexuals was signed by then Cardinal Joseph Razinger, who later became Pope Benedict XVI.

DeBernardo told the Blade New Ways Ministry decided to release excerpts of the Pope’s two letters rather than the entire letters because some of the content “were pastoral and personal messages which it was not appropriate or relevant to release.”  He said the decision to release the excepts was made after a National Catholic Reporter journalist contacted the group for comment after the newspaper learned that the link to the New Ways Ministry video had been removed from the Vatican based Synod’s website.

“We made the decision that we would let him know about the papal correspondence as a way to show that Pope Francis was indeed genuinely interested in LGBTQ people, as evidenced by the fact that he was in supportive correspondence with New Ways,” DeBernardo said.

“In two letters to New Ways Ministry this year, Pope Francis commended the organization for its outreach to the LGBTQ community and referred to one of its co-founders, Loretto Sister Jeannine Gramick, as ‘a valiant woman’ who suffered much from her ministry,” the newspaper reports.

“Written in Spanish on official Vatican stationary, Francis’ letters mention that the Pope is aware that New Ways Ministry’s ‘history has not been an easy one, but that loving one’s neighbor is still the second commandment, tied ‘necessarily’ to the first commandment to love God,” the National Catholic Reporter story continues.

“It helped me a lot to know the full story you tell me about New Ways Ministry’s history,” the newspaper further quoted the Pope as saying in a May 3 letter. “Sometimes we receive partial information about people and organizations, and this doesn’t help. Your letter, as it narrates with objectivity its history, gives me light to better understand certain situations,” National Catholic Reporter quoted the Pope as saying to DeBernardo in the May 3 letter.

“In ongoing communications with us and with others, it is clear that Pope Francis wants LGBTQ ministry to thrive,” DeBernardo said in a Dec. 13 statement. “He has publicly emphasized that he wants all people to participate in synod discussions, especially those who have been marginalized or alienated from the church,” he said.

“This unprecedented apology from a Vatican office corrects the earlier mistake and amplifies, even louder, the welcome that Pope Francis has extended to LGBTQ people,” said DeBernardo.