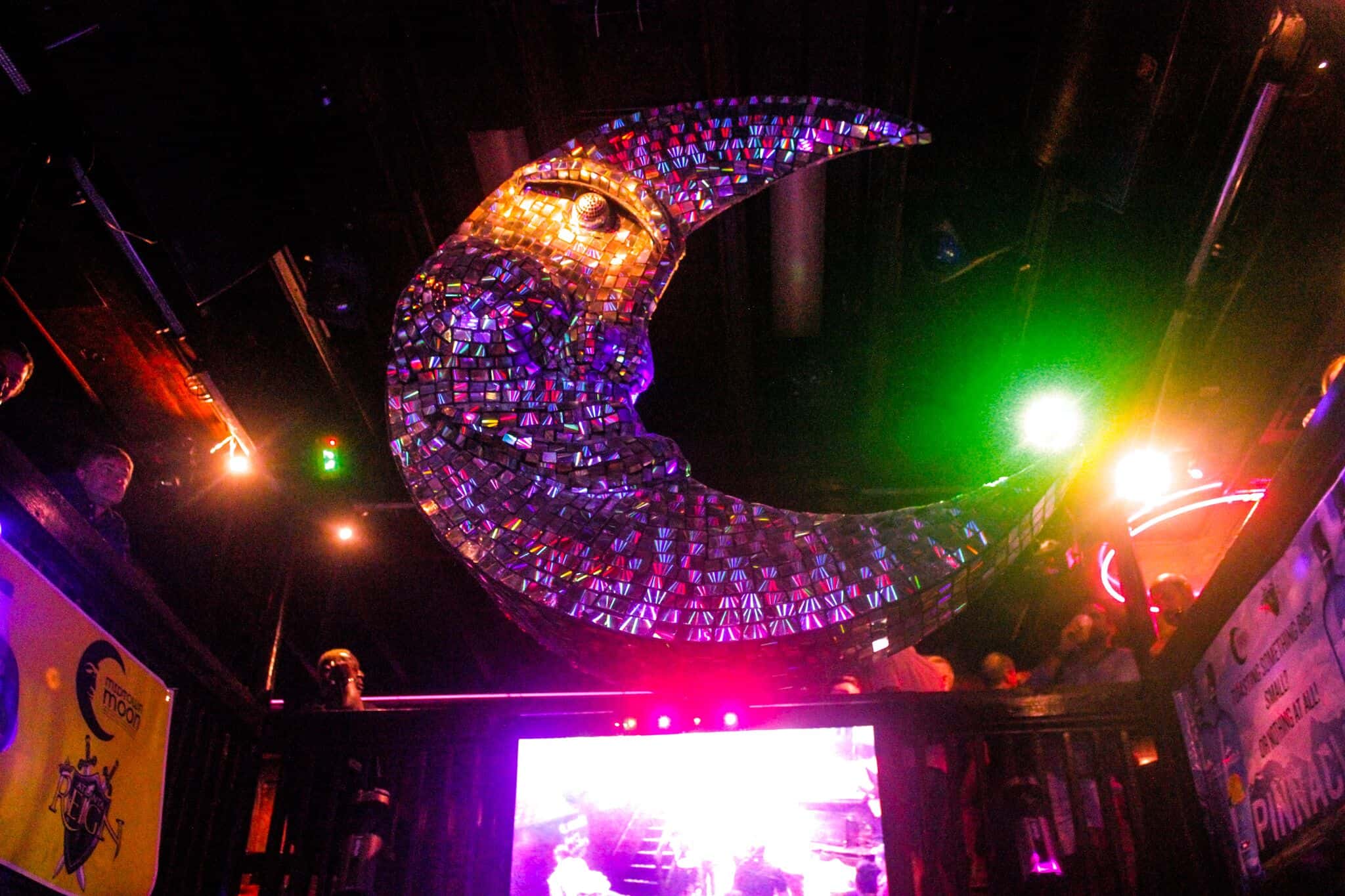 A Night at Midtown Moon

The closing of Burkhart’s in February was an abrupt farewell to the establishment of 28 years. The reasons for its departure made it even more disappointing. Burkhart’s former owner’s offensive racial remarks opposed everything that the LGBTQ community represents. All of the entertainers quit. Burkhart’s attempted to continue, but it was short-lived. It was the end of an era. But with the opening of Midtown Moon, a new one is on the horizon.

The neighboring bar Oscar’s operator, Marco Penna, and owner, Chris McDonald, took the initiative to start from scratch by opening Midtown Moon. The venue resides in the same space that Burkhart’s previously occupied, a cozy two-story nook in Ansley Square off Piedmont Avenue.

I had the pleasure of making a stop at Midtown Moon on a sweltering Saturday evening. Arriving, it’s a multi-faceted gala where you’re friends with everyone. Entering the venue, I was entranced by the spinning moon that glistened over the epicenter of the dance floor, reflecting an array of strobe lights and textural movements throughout the deceivingly large venue.

The central bar is accessible from the spacious dancefloor, a sidebar across from it provides a more intimate setting. Upstairs, a DJ spins, a small bar is tucked in the opposite corner, and two large billiards tables lounge right by the outside entrance. The second tier provides a convenient view to the ground level.

Around 11pm, a crowd pours in like rainwater on 14th street, welcoming the vibe the space used to represent. It’s the second homecoming. Guests shout for their long lost friends over the celebratory dance music. Upon every corner, there are exchanges of group hugs and copious amounts of kisses, rejoicing in being reunited with their old friends in a renewed fashion.

The summer evening beckons the majority of guests out to the well-kempt patio. A six-foot crescent moon smiles along the back wall. A gazebo occupies the center of the courtyard, allowing everyone to gather around and seek a bit of tranquility from the indoor festivities.

Friends gather on the wooden benches, clearly delighted, exchanging stories and exposing their smiles. The trim of the seats has subtle fluorescent lights that give off a sense of serenity, complimenting the rest of the ambiance. And in the opposite back corner, a more sequestered and personal collection of tables rests against the fence.

The outdoors is where I begin to make friends.

I had the chance to speak with Kevin, a former frequenter of Burkhart’s before its closing. “[Marco Penne & Chris McDonald] cater so much to the community with Oscar’s and now this,” he says. “I’m really happy that they came back to save it.”

In the midst of conversation, I noticed that the music came to an abrupt halt — time for the performers to take the stage.

As I am heading out for the evening, I have the pleasure of running into Marco Penna. He politely introduces himself. “It’s a pleasure to meet you. We’re glad to have you. Welcome,” Marco earnestly says to me. The pleasure was all mine. Earlier in the evening, I saw Marco making rounds with his guests, taking photos, and sharing his appreciation for their decision to spend their evening with them.

Midtown Moon flourishes by carrying on the tradition of unconditional love and acceptance no matter your identity, and making progress for the celebration of pride in the city of Atlanta. Marco and Chris have set their sights on striving to demonstrate the positivity that the community embodies rather than dwelling on the past mistakes of others. Their efforts have been a monumental success. No matter the occasion, Midtown Moon is a place that can cater to anyone’s needs, and it has made its landing in Atlanta.