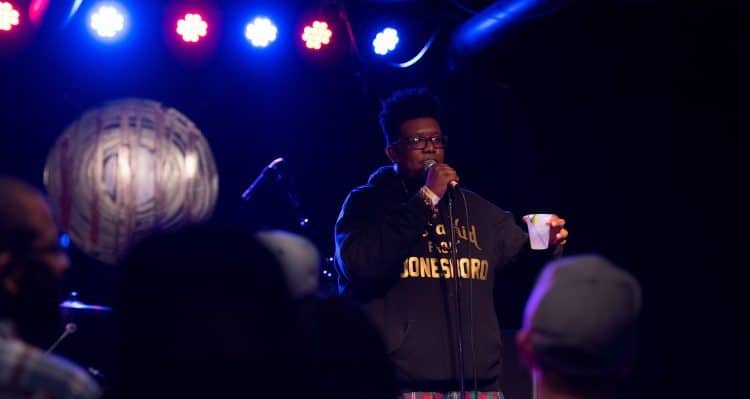 Atlanta comedians take to the stage for LGBT social justice

But for Atlanta comedians, there’s another way to spread the word: stepping up to a microphone.

“Not long after Trump was elected, we got together and said there’s more we could be doing,” said comedian David Perdue. “If there’s a lot of bad out there then as people, we have to come together and find ways to be better than the bad.”

Perdue — no relation to the senator bearing the same name — grew up in Jonesboro and started doing comedy about six years ago. Recently he’s done comedy show fundraisers for the American Civil Liberties Union and the Southern Poverty Law Center.

“I love people and I don’t like to see people not given fair shots or treated anything ‘less than.’ That’s the heart behind my comedy and my process in picking these organizations to work with,” Perdue said. “I went to Morehouse College and that college produces leaders. When I was there, the motto was to be a Renaissance man with a social conscience. I wanted my comedy to enforce those ideas and be more than jokes. I wanted to be somebody that stood for something and had principles onstage and off.”

Fellow Atlanta comedian Ian Aber, who happens to be gay, has done shows benefiting LGBT causes and will participate in the upcoming “Laughs Trump Hate” show in May (date and location to be determined).

Jen O’Neill Smith is one of three female comedians who created “Laughs Trump Hate,” with the purpose of helping anyone negatively affected by the 2016 election. Past shows benefited the SPLC and Planned Parenthood, and the next round in May will benefit LGBT homeless nonprofit Lost-n-Found Youth.

“We were all together on election night and you know, it was a house full of female comedians. All of the Atlanta female comics were ready to celebrate. We had bottles of champagne ready to go. We thought we were going to witness something historic,” Smith said. “We were so disheartened and saddened and shocked by the results. We felt so hopeless that immediately we were like, what can we do? We can’t just accept this. We can’t just roll over and let this be.”

At each “Laughs Trump Hate,” the comics booked represent a marginalized group — women for the Planned Parenthood show; comics of color for SPLC; LGBT comedians for Lost-n-Found. Smith said the response has been great — more than $1,000 raised at each of the first two shows.

“The opportunity is there for us. If we did not take advantage of that, and didn’t use it, it would be a tragedy,” Smith said. “I think that it’s important more now than ever to have these situations where people are hearing someone face-to-face in a room with a microphone, with no confusion to the message that’s being heard.”

“If not for the artists, then who does it?” Perdue said. “We have the opportunity to speak the truth. … I recognized early on, doing comedy, that I can do almost anything that I want and people will laugh at it. I recognize that just because I can say something, I should use that platform to say something important. I can throw in things that are more than just a laugh. They’re perspectives. They’re ideas.”

Though Perdue is more purposeful about his political commentary — coming from a six-foot-two, straight black man, he says it means something different — Aber said he doesn’t put overtly political themes into his stand-up, allowing his performances to be more nuanced.

“I don’t have to say I’m pro-trans rights. I just say I’m gay and that’s it. What I do is I talk about my life with my husband. I talk about my family. I do talk about where heterosexual naïveté or ignorance kind of butts up against my life,” he said.

This approach reaches people in a different manner. Aber said he shows his audience his relationship is just like theirs.

“My approach tends to be, sneak in the social justice messages,” he said. “Female comics can get up and say, ‘I’m a feminist’ … Perdue gets up and talks about Black Lives Matter. When I would attempt that, I would get even more resistance. If I related more on a human level, all of those messages kind of come across.”

Not so much in his shows, but on his social media pages, Aber tends to be “a little bit more demonstrative.” He uses his platform as a well-known comedian to teach others that the words they say matter. For example, if he sees an offensive comedy clip, he will share it to his page along with a caption educating people about why it’s an issue.

He said if comedians are truly political and active in social justice initiatives, that should be coming across in their humor in a way that’s not alienating.

Smith, like Aber, isn’t in-your-face with political rhetoric in her personal routine. She prefers to talk about her kids and husband.

“But, through doing ‘Laughs Trump Hate,’ it motivates me to add more of a political message into my comedy,” she said. “I’m always inspired by the comics that do.”