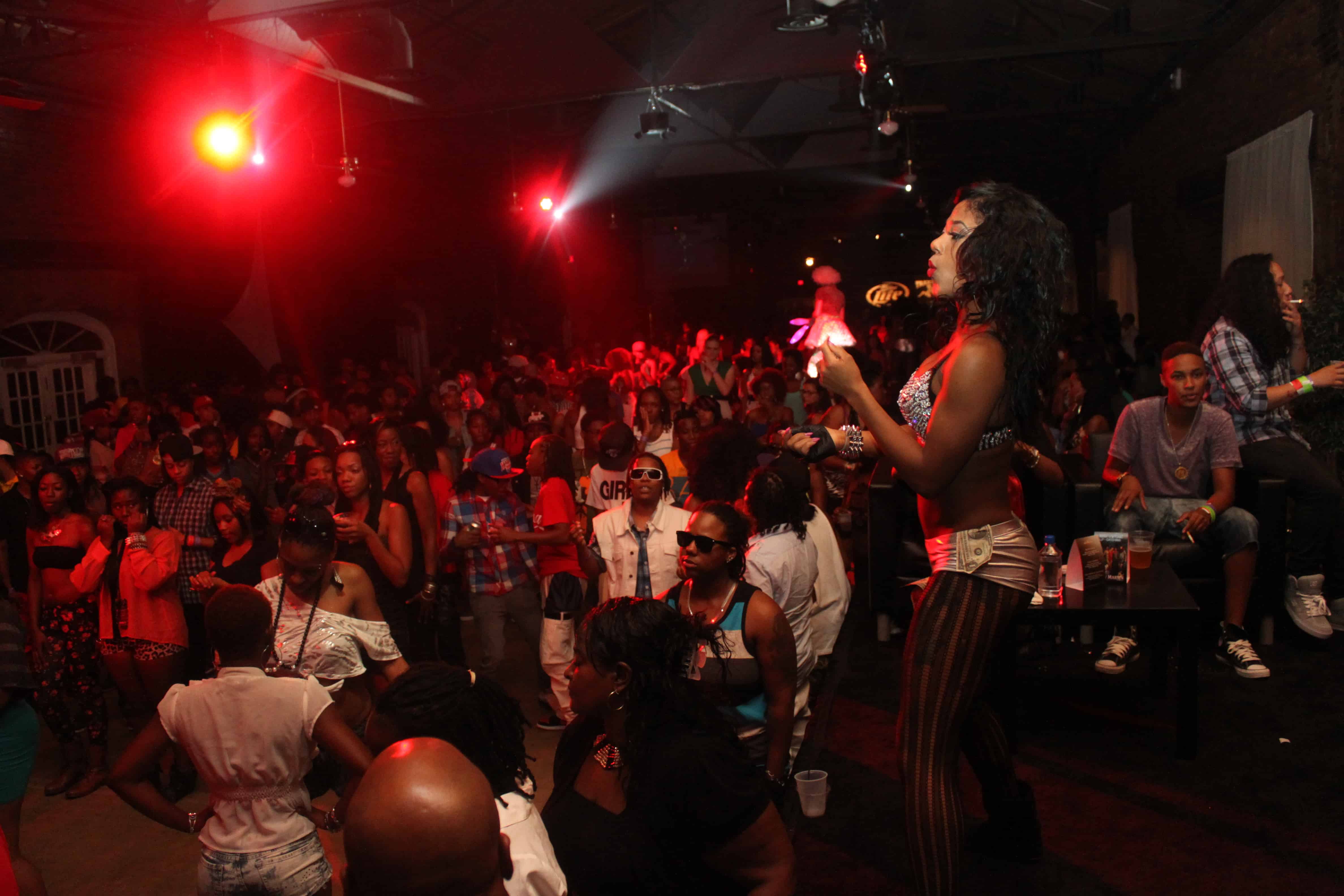 Black girl blowouts: Lesbian nightlife during Black Gay Pride and beyond is more than business

DJ M, real name Melissa Scott, a founder of Traxx Girls, and Corbitt, founder of Xplosion Entertainment, are pioneers in Atlanta’s lesbian nightlife. Both host parties and events throughout the Atlanta Black Gay Pride weekend that bring in thousands of lesbians from across the globe interested in dancing each evening away to up-and-coming DJs, gawking at their favorite straight and gay celebrities, and partaking in festivities that celebrate gay life.

Beyond the tens of thousands of fans they gain each Atlanta Black Gay Pride weekend, the party entrepreneurs have also expanded their businesses with enrichment and fundraising activities, year-round nightlife entertainment, and sharing their unique party experiences in such cities as Los Angeles, New York and Toronto.

Filling a void
Setting the trend for Atlanta’s black lesbian nightlife has not been by accident, Corbitt says.

“We are all very professional,” Corbitt says of Atlanta’s black LGBT party promoters. “We are from corporate America, so we apply those skills to nightlife. We really pioneered the quality of Atlanta LGBT nightlife, and we didn’t do that by just throwing parties with no business acumen.”

Corbitt, a sales executive, began her foray into party promoting as a way to expand the brand of the Xplosion women’s football team, which she formerly owned. Corbitt began hosting the Thursday hip-hop night at My Sister’s Room in 2006. The weekly events drew attention to the niche sports team but also filled the void of party promotions offered to lesbians of color.

“There was really nothing for the football players to do after their games, and we realized that meant not much to do for other African-Americans here,” Corbitt said. “Atlanta has a strong support base, so it wasn’t long before we were having parties monthly.”

Scott’s fascination with the party scene began before she was old enough to enter a club. The Baltimore native and mathematics whiz would sneak into her father’s strip club and take inventory of his liquor as a child. Scott’s school-age curiosity led to finding her way into the deejay booth as a teenager. She began deejaying and promoting parties in Augusta, and the buzz around “DJ M” caught the attention of the founders of Traxx in 2006.

“It was just something we were working toward for the ladies, and it escalated into a large following,” Scott said. “When I started, I thought I could just keep deejaying and run the parties from the booths. That didn’t work for long.”

Capitalizing on Pride
Scott and Avian Watson, Traxx Girls sponsorship director and publicist, set out to innovate the Atlanta Black Gay Pride party experience. They discovered ways to send out text messages to potential partygoers’ phones and email invites to stir up interest. Scott and Watson also visited Prides in Miami and New York to glean ideas on growing their parties. Adding the likes of Nicki Minaj, Brandy and others to the weekend lineup every year had locals and national Atlanta Black Gay Pride attendants flocking to Traxx Girls parties.

“Finding celebrities that found value in the black gay dollar definitely helped,” Scott said. “It’s just innovative little things we added every year. We always looked at it as a party, but it’s still people’s money that they worked hard for. They have expectations.”

Scott and Watson exceeded expectations when they introduced the PureHeat Community Festival in 2011 at Piedmont Park. The Traxx Girls organizers consulted with the city, brought on national sponsors and extended their reach beyond the club scene that usually dominates the Pride weekend.

“We had six weeks to make PureHeat happen the first year,” Watson said. “We had water and a deejay. That alone brought in 8,000 people to Piedmont Park in one day. We were really able to see the ‘no’s’ turn to ‘yeses’ at that point.”

The family-centered festival, which is held on the Sunday of Atlanta Black Gay Pride, has gained sponsors like Wells Fargo, Mass Mutual Financial Group, and New York Life.

Those corporations have been clued in to the massive spending that takes place every Atlanta Black Gay Pride weekend. About 50,000 people come to Atlanta for the festivities, Scott says. Each participant spends $1,000 on Pride activities and another $1,000 in the city on such things as hotels, food and more.

Branching Out
The record-breaking attendance at those events goes back to the professionalism and trend-setting savvy of Atlanta party promoters, Corbitt said. Corbitt now organizes up to 50 events a year in Atlanta. This year, she is putting on the second annual Queendom, a series of events for women participating in Atlanta Black Gay Pride.

In its first year, more than 4,000 people attended Xplosion Entertainment-sponsored activities. Her events feature YouTube stars, gay fashion designers and other local and national talents. Corbitt and her business partner Myah Mustafa, also known as DJ Dimples, add to the variety offered to lesbians of color.

For seven years, Mustafa, a Miami native, has hosted the Memorial Day weekend event SweetHeat for lesbians in the heart of Miami. She sought to bring some of her party promoting ideas to Atlanta with Queendom.

“I deejayed often in Atlanta and noticed there weren’t events for 21 and up,” Mustafa said. “I try to make it about the community with all the events I do. Queendom is still a baby, but it will soon be as amazing as SweetHeat.”

Despite being in its infancy, Queendom has expanded to Los Angeles, where Corbitt now lives.
Corbitt will soon be announcing plans for a Halloween party in Southwest Atlanta. Her weekly events like IconFridays and HerShe Thursdays continue to keep the Xplosion brand relevant in Atlanta.

Having Xplosion, Traxx Girls and other party promoters putting on events catered to black lesbians in Atlanta give the variety that the community has demanded for years, Scott said.

“How would you measure your success if we had nothing to compare it to?” she said. “We watch our market trends really closely, so we know it’s important to keep the expectations high for our different markets. Our 35-year-old customer has a completely different expectation than our 20-year-old one does. We cater to those different demographics.”

Outside of the parties, Scott and Watson have utilized the Vision Community Foundation, a nonprofit created to empower healthy living, to dig deeper into the community. The nonprofit and Traxx Girls have fed homeless women, offered HIV testing, and hosted parties that collect toys for children.

“With our parties, we create an environment where people are happy. They feel free to be themselves,” Scott said. “We want to eventually have a facility for gay youth similar to the Boys and Girls Club that’s conducive to those young people feeling that level of comfortable with us. It’s all about keeping the smiles on the faces. That’s why I do this.”