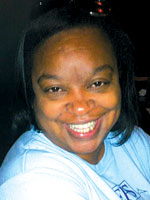 A longtime security employee of Blake’s on the Park said today there was no discrimination by the Atlanta Police Department against patrons of the bar after the APD was called in to help break up a fight on Friday night.

“No one was hurt, no one was taunted or were physically abused by anyone. The only people that got hurt was our staff, trying to apprehend the jerks that started the whole mess,” Lynn Barfied told GA Voice. Known as “Mama Lynn” by many of the patrons of the bar, she has worked at Blake’s for seven years.

“They [the APD] show up any time we need them at our bar for incidents just like this. It’s not news to us, it’s what we deal with every weekend. How the rumor of officers discriminating against anyone got started is beyond me,” she added.

Barfield said APD officers did not come inside the bar because the two men asked to leave were already outside when they arrived on the scene.

Another witness who spoke to GA Voice and asked to remain anonymous also said he saw no signs of police misconduct or discrimination against patrons.

“At no time did I feel the police force was excessive. As a regular customer of Blake’s, I am familiar with the 4 or so off-duty officers that work there and they are always respectful to the patrons,” he said.

An anonymous witness who spoke to Project Q Atlanta said officers were calling patrons “princess” and “sweetie.” The witness also said an officer ordered him to stop recording the scene with his mobile phone and ordered him to delete what he had filmed.

It is legal for citizens to film the action of police officers, a policy implemented as part of the city’s $1.025 million settlement with Atlanta Eagle plaintiffs in a federal civil lawsuit whose constitutional rights were violated when the bar was raided by the APD in 2009.

“Yes, APD needs to continue to work to regain the trust from members of the community after the debacle that happened at the Eagle. Shame on them for that. But you can’t scream fire when there isn’t one. That only looks bad for the community as a whole,” Barfield said.

The full preliminary report from the APD released on Saturday:

Sometime Friday evening (or possibly early morning hours on Saturday), two males were asked by the manager to leave the establishment (Blake’s). They refused. The manager called for the off-duty officer working at Blake’s, who advised one of the individuals they would have to leave. One of the males refused and threw his drink in the officer’s face and then punched him in the face.

At some point, a call for assistance went out over the radio and several Zone 5 officers and a supervisor arrived on scene. One of the individuals damaged a third person’s vehicle in the parking lot and was charged with Criminal Damage to Property. The first individual that punched the off-duty officer was charged initially with Felony Obstruction. Our LGBT Liaison officers have been notified of the incident.

If there are specific allegations of wrongdoing or misconduct by any officers, we will investigate those allegations. We ask anyone with those specifics to contact our Office of Professional Standards if they are interested in filing a complaint.