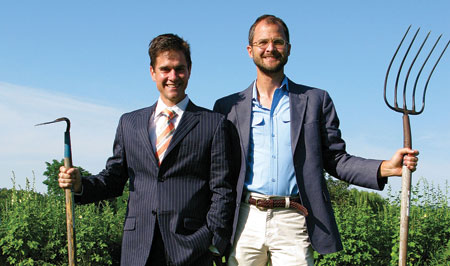 “We’re two city guys who bought a farm. We’ve got a herd of goats. A llama. And a whole lotta drama. Farming ain’t easy. But we make farming fabulous,” the boys explain on their website, Beekman1802.com. “Or at least that’s what our TV theme song says.”

The cable series is frequently described as a gay take on the “Green Acres” motif. Since it debuted in 2010, the boys have bickered and made up through two seasons of struggle as they work to grow the Beekman farm and their Beekman 1802 brand to a level of success that will allow Kilmer-Purcell to quit his job in the city and move to the farm fulltime.

“The Beekman 1802 Heirloom Cookbook” is one of their products. Though the TV episode devoted to the idea was titled “Recipe for Disaster,” real-life cooks will find plenty to love with comfort food dishes like baked apple dumplings, pork roast with root vegetables and more.

We caught up with Ridge and Kilmer-Purcell via email as they prepare to visit Atlanta for Oct. 21 signings at The Cook’s Warehouse in Decatur and Williams Sonoma at Lenox Square.

Did either of you have much experience cooking before trading city life for life on the farm? How has farm life changed the way you approach cooking and eating?

Brent and Josh: Both of us have always loved to cook. Our approach to cooking has always been about the need for sustenance and comfort rather than culinary one-upmanship. Food does not have to be exotic or overworked to be delicious, but it does have to have story behind it in order to be memorable.

Each of the 110 recipes in the cookbook is derived from recipes our families have made for generations. Like all recipes tend to do, the recipes evolved over time and with each season depending on what ingredients we had on hand or were pulling fresh from the garden.

How did the idea for a cookbook evolve? Is there a specific theme to the recipes?

The book is divided by season, but the real focus is on what we call “heirloom” recipes —those recipes that are easy enough and delicious enough that you will make them over and over again. We’ve even included dedicated spaces in the book for you to record your family’s own heirloom recipes and notes.

What we love most is learning from the people who visit beekman1802.com and share their tips. To have the opportunity on a daily basis to be inspired by what others are creating or doing it the most fabulous luxury.

Cleaning goat poop from our muck boots is not exactly fabulous, but it’s also not that bad.

How has moving to the farm impacted your relationship?

Like so many people right now, we are working on growing our business and keeping the farm solvent during the recession. Having a project that we are mutually working on and a mutual long-term goal makes us inseparable.

A jumbo mortgage is way more commitment than a wedding ring.