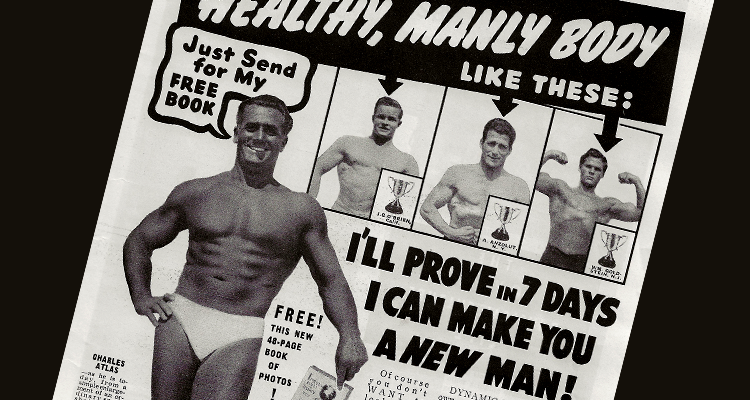 A Personal History of Exercise, Machismo, and Charles Atlas

Were you a 97-lb. pencil-necked bag of bones? When you went on the beach, did bullies with massive pecs kick sand in your face and scream, “Hey, skinny! Yer ribs are showing!”?

If you’re old and read comic books as a kid, you recognize those words from years of countless advertisements by Charles Atlas, a skinny Italian immigrant who turned himself into the iconic muscle man of the last century. Daddy Atlas sold an exercise program called “Dynamic Tension,” basically isometrics combined with movement. The idea was to provide strength training using the body’s own weight with extreme muscle contraction, so no weightlifting equipment was needed. It’s the training you were supposed to be doing at home for the two years COVID-19 kept you from the gym.

I was a pencil-necked, rather girly kid who hated sports and got called “sissy” as often as “skinny,” so my mother enrolled me in the mail-order Dynamic Tension training plan. Every month, I received a blank blue envelope containing new, secret instructions for becoming the most muscular 10-year-old alive. I’m sure you can deduce that if your mother is demanding that you transform your body to avoid cruel torment, she is effectively shaming you herself.

Adding extra muscle to the explicit shame, I was forbidden to disclose the re-engineering of my body, somewhat the way my mother later in life would hide in the Caribbean after countless cosmetic surgeries. I had no interest in this, but I enjoyed hiding in the attic, where my mother had installed weightlifting equipment. I rattled a dumbbell with my feet while I read books my mother had banned.

Millions of pencil-necks turned Charles Atlas into the first fitness guru. Like most gurus, his training program’s ultimate goal wasn’t so much about muscle development as it was about making a man out of you. If you could punch out another man, you were a real man. As such, the marketing was largely indoctrination in the “toxic masculinity” that created and still runs America. Atlas himself was also a loyal Catholic who never drank. In fact, after his wife died, he tried to become a priest.

My mother lost control of my body when puberty arrived and I stopped the pretense of working out (my tongue was muscular enough to eviscerate any enemy). Then something totally unexpected happened when I turned 16. I asked my shocked parents for a membership in the Buckhead YMCA. I went as often as I could. Following my mother’s earlier dictum, I crazily did not want anyone to know I was going there. I was clueless about my sexuality, so, no, I wasn’t looking for love there. My goal, I realized in retrospect, was not to build muscles and cultivate masculinity. It was to relax. I lifted weights above my head and, like I’d later learn, I entered the “zone” of total presence and near-elation. I did this throughout the last two years of high school, not telling anyone and without creating any significant change in my appearance, although I was a lot stronger. Basically, I was meditating.

Then there was exercise-free college as a hippie and getting married at 20, followed by divorce after five years and beginning my journey out of the closet at 25. Once again, I returned to exercising. I bought equipment that I put in a spare bedroom, and I swore my partner to secrecy about my strange hobby. By this time, deciding that I had to be muscular to have sex with other men, I also joined the YMCA in Augusta for more rigorous workouts. After six months there, I was asked by another member to start training kids at a tiny gym. It’s hard to explain how odd it was at that time to be identified as a “personal trainer.” It was also like walking through my own childhood, seeing skinny boys dispatched to me — me! — for manly muscle building. What I did, of course, was try to give the kids refuge from their parents and focus more on their psychological needs from a somatic point of view.

By the time I was back in Atlanta in the late ’70s, every gay man was expected to be building muscle. I was well primed to fall into that mania, going full-on Charles Atlas. When AIDS appeared, the gym became a huge desperate metaphor for invincibility. That’s why one writer of the time noted that the “gay gaze” shifted from the crotch to the pecs. After decades of pushing myself toward my mother’s and Charles Atlas’s unintentionally gay goal, I ended up severing my knees’ tendons and undergoing irreparable botched surgery. I’ve also blown out my left shoulder. Honestly, COVID gave me a needed rest, but two years of getting no exercise and turning old sucks.

When I went back to school to study psychology after discovering meditation almost 30 years ago, I did also move back into that space of linking the gym to the experience of brilliant presence. In fact, whether you’re aware of it or not, when you are lifting a weight or running on a treadmill you are fully present; otherwise, you’re on the floor with a concussion. Full presence of mind and body is what makes suffering tolerable and exercise addictive. I began talking to clients about this, especially ones with depression like me, urging them to give the gym a try. A few did, a few stuck with it, most took a pass. It’s admittedly difficult to summon the energy to exercise when you are paralyzed by depression.

I looked for a way around that. I explored finding an office in a gym. I would see clients there and spend half their sessions training them to observe their feeling state as they slowly moved weights through space and developed muscle. I got a ton of inquiries about this from other people in my field. I was shocked that nobody was already doing this. I was even asked to speak about it at several conferences. Unfortunately, the problem prevailed. While I told clients sincerely that they didn’t have to work out to see me, most clearly didn’t even want to walk through the door of a gym. It can instantly trigger all that shame.

I think acquiring somatic presence of mind — without Charles Atlas’ equalizing of super-size and super-masculinity — remains a huge problem for gay men. We’ve been vilified for our bodies’ desire and gender defiance, no matter how subtle. We get very careless. I saw that repeatedly in gyms that barely enforced any protections during the COVID crisis. If you’re a gay man, you likely want to be a macho-macho-macho man, a milder version of Charles Atlas’ manly man, but, please, pay attention to your thoughts and feelings when you throw that kettlebell upward. They have a lot to tell you.