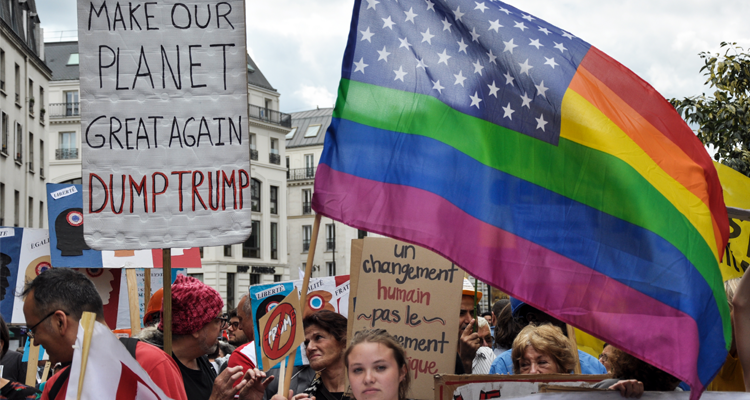 Clément works as a bartender at a local Paris café. He’s well read and finishing up his college degree in archaeology. Dashingly handsome, with a shiny vintage motorcycle, he fancies himself as a bit of a bad boy and a ladies’ man, the French version of Indiana Jones. He knows I am an American, and after the latest “outrage du jour” made by Trump, Clément asked, out of genuine incredulity, if I thought Trump was going to win reelection.

“It’s entirely possible,” I said. “I never thought it could have happened in 2016, but it did. I’ve learned my lesson.”

“But … but … HOW?” he asked, gesticulating in that effortless French way with his fingers pinched and thrusting his arms out, as if he were casting away an evil spirit.

I don’t think he was asking about the mechanics of the antiquated system of the antidemocratic Electoral College. Most French people understand that the U.S. presidential vote is a convoluted mess, and any effort to explain is met with a glassy stare as if you are explaining how algebra works. No, Clément, like many of us, is at a loss as to how someone with such an odious personality, who has so obviously failed in the basic requirements of leading a country during an unparalleled crisis, could possibly still be polling at around 40 percent. France has had its share of both offensive (Sarkozy) and ineffectual (Hollande) presidents, and both ended their single terms in office with abysmal poll numbers.

The French view Trump as a dangerous buffoon. Pew Research polling across Europe most recently had Trump with an 11% vote of confidence among the French, with the overall positive view of the United States at a paltry 31%, slightly below the median of the 13 other countries it polled (34% approval). In fact, Trump is less trusted than even Russia’s Putin or China’s Xi.

It is difficult to overstate how much not just Trump, but Trump supporters (the 40% of Americans who delight in him “giving it to the libtards”) has completely destroyed America’s brand around the world. The bartender, Clément, asked about the protests he was seeing online, wary that they might be fake news.

“Is it true that ordinary people can carry assault weapons to a protest?” he wondered.

I paused, because even I had a hard time believing it was possible.

He shook his head, and then laughed incredulously. “I’m sorry,” he said. “I shouldn’t laugh, but that is seriously —”

He had many questions. Why Texas, with so many Latino residents, couldn’t give Biden a victory, why absentee ballots were an issue, why do Christians vote for Trump, how it’s possible that Trump could lose the popular vote and still win, why can’t Congress stop him, will the military support Trump … most of which I could explain, but when the words left my mouth, I realized made no sense to someone who lived in a rational world. We didn’t even get into the myriad nightmare scenarios of what would most likely happen following November 3rd when legal suits, court fights, protests in the streets, and constitutional ambiguities will plunge the nation into chaos. Clément sighed.

“He’s not going to leave is he?” he finally asked.

I shrugged my shoulders, doing my best impersonation of a Frenchman.