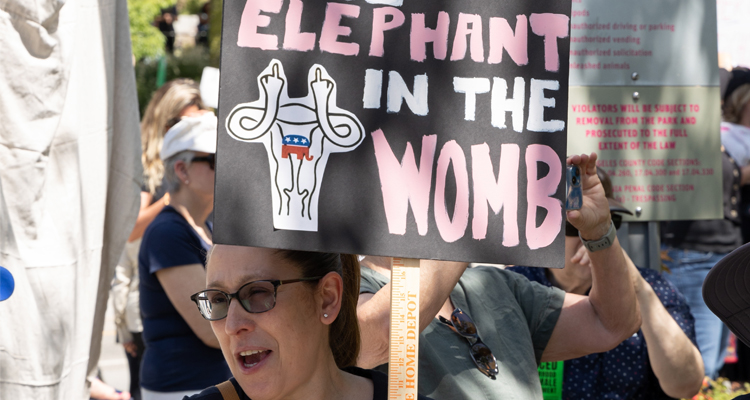 As an abortion-rights advocate, what can I say about abortion that hasn’t already been said? “Pro-life” attempts to ban abortion are actually ploys for control over women’s (and all pregnant people’s) bodies, they’re representative of the Christian disinterest in separation of church and state, yadda yadda yadda. The most apt “gotcha” abortion-rights folks like to employ is the argument that if people were truly “pro-life,” they would advocate for paid parental leave, welfare, and other social programs benefiting children and their parents. While this is true, it’s also the whole point. The point of banning abortion, to those who actually have the power to do so, is nothing more than to keep poor people poor.

Abortion is a morally nuanced topic. If you are someone who truly believes in your heart of hearts that all children are gifts from God, that life begins at conception and is intentional, part of God’s plan, then it makes perfect sense to be morally opposed to abortion. I deal blackjack with an event company as a side gig, and I recently worked a fundraiser for an anti-abortion pregnancy clinic. And although I obviously did not get a glimpse at the vulnerable women who may have felt manipulated or taken advantage of by this organization, it was clear the organization valued giving mothers financial and emotional support, something I think is a net good. Even “Jane Roe” herself, Norma McCorvey, became anti-abortion after the Roe v. Wade decision.

As someone who favors abortion rights, I believe in the choice to be anti-abortion. If all people were forced to abort, I would be just as opposed to that as I am forced birth.

The problem is that people in power are abusing morally coded language in the pursuit of empowering themselves. Obviously, having babies costs money, so it stands to reason that financial inability has an influence on abortion. According to a 2005 study published in “Perspectives on Sexual and Reproductive Health,” 73 percent of women undergoing an abortion — and 81 percent of women living below the federal poverty line — said not being able to afford a baby now was a reason for the abortion. Having money and affluence puts one above the law in a way poor people aren’t — meaning, wealthy people will still be able to access abortions, or at least won’t have to heed the consequences that poor people will. Banning abortions directly and explicitly impacts the poor.

There is a reason why so-called “pro-life” Republicans advocate against social safety nets. Banning abortion is just a way to cloak their interest in sustaining the economic subjugation of the poor in a message of Christian “morality.” This is not a fallacy of logic, something they are overlooking or had not considered. It is intentional.

It’s the same with anti-LGBTQ legislation. Republican legislators are simply vying for votes by creating a scapegoat of the LGBTQ community so they can get reelected by their homophobic supporters and maintain their political power and masking it as some “moral obligation” to the children they consistently legislate against.

The solution to the abortion debate is a simple one. You can believe what you want and do what you want with your own personal life, but the government should not be involved. Christian ideals of morality are not, nor should they be, the law of the land. And if you are an anti-abortion Christian, I respect and understand that. But I implore you not to allow people who have power and control over you to take advantage of that, to virtue signal and manipulate you for their own benefit. Instead, heed the words of Proverbs 14:31: “He who oppresses the poor shows contempt for their Maker, but whoever is kind to the needy honors God.”