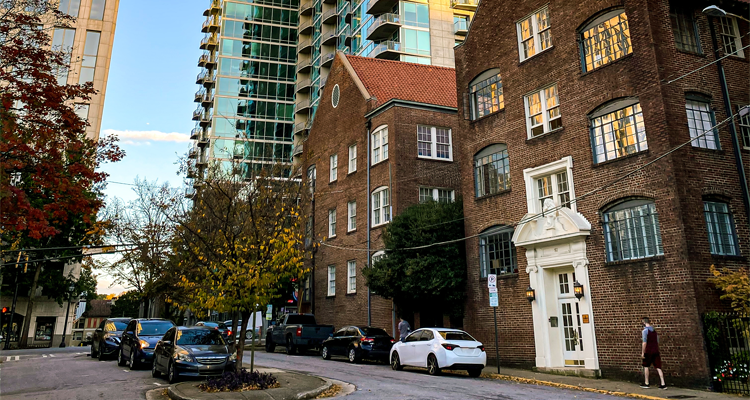 In the mid ’80s, I spent two miserable years editing a gigantic, regional home and garden magazine in Houston, Texas. Overall, the city had fallen into a bleak recession, but our market was international oil zillionaires who continued living in the kind of luxury that Liberace and Tammy Faye Bakker are enjoying with Dead Jesus.

Now, don’t mistake luxury for good taste. I remember going to a photo shoot in a downtown Houston penthouse. As I recall, we were drawn into featuring the home on the basis of its many art treasures. The problem was that the penthouse looked like a warehouse with statues and paintings haphazardly placed by a two-year-old. So, as many design magazines do, we arranged the cool stuff, put a lot of the million-dollar shit in another room, and even painted some walls.

I hated that job. On the other hand, I did encounter a lot of playful and beautiful architecture in the city and became obsessed with questions about the relationship between people and space. When I returned to Atlanta for a second term of editing “Creative Loafing,” I decided we needed an architecture critic. I put the word out and had good response. I gave all the candidates the same essay assignment: a critique of John Portman’s architecture. I’m talking about Peachtree Center, the Hyatt Regency Hotel in particular. Not a single candidate — not even the academics — would write the essay, all claiming it would ruin their careers.

This shocked me. Peachtree Center, at least at that time, was everything architecture should not be to my eyes. It was literally designed in the ’60s to keep the external environment out of contact. You could move from one blank building to another by way of walkways in the sky. There were in the very beginning no spaces to hang outside, no privacy anywhere. The reason for that was to discourage Black folks from gathering, torching, and looting. The hotel’s huge open lobby made it a favorite place for people to jump to their deaths. Is it coincidence that such a sterile, otherworldly space would host the theatrics of suicide? No, it is not. Sterile affectations block the imagination and kill the soul.

The same is true with our homes. Gaston Bachelard, author of “The Poetics of Space,” was a French philosopher of the imagination who wrote that the primary function of the home is to provide a space for reverie — daydreaming. The images generated in each home follow us throughout our lives, often unconsciously. Not long after my parents died 15 years ago, I took a road trip to Charlotte, North Carolina, where I spent most of the first 13 years of my life. We lived in three very small homes. As I faced the first house, I noticed what I recalled as a huge window in the front, and I immediately was visited by an image. I would have been five or six, when my mother had already carted me to a psychiatrist. I was looking out the window and saw a group of kids raking up fallen leaves, running and jumping into the piles. I can still feel the longing to join them, but also the more powerful dread of being rejected. I’m still behind the window.

The second house was only a block away, and when the owner there let me into the house I was bombarded by images, many of which I’d forgotten. Outside, there was the huge dogwood tree whose blooms represented the death and resurrection of Jesus, according to a neighbor. I had no idea who Jesus was. There was at the end of the street a large mimosa tree. I regularly ran away from home and sat in the tree until my mother lured me home with cookies. Most startling to me was my bedroom. I remembered it being off the kitchen, but now I saw that it was actually a large pantry. In that room I first became aware of invisible beings, specifically the Muffin Man who was living in my chest of drawers. I was terrified to open the drawers. This is where my mother’s nightly screams came to an end. During my youngest brother’s pregnancy, she awoke every night from a nightmare in which a clock was counting down the minutes until his birth as a “Mongolian idiot.” For whatever reason, her doctors had (incorrectly) told her to expect that. As I stepped into the room he shared with our middle brother, I realized that I was the only person in our family of five who had his own bedroom ever, whether by necessity or choice. Before I left the house, I stood in the hall and took a deep whiff, smelling the hundreds of books my mother had stored there after her parents died. They were gone, of course, but attics became my refuges.

It was not the memories per se that astonished me during my road trip, but the way feelings that have been with me my entire life reappeared in images. It was a perfect example of the way awareness is created by both the subject and object of consciousness. This is the reverie that Bachelard refers to. It propels us forward to the next house.

Or maybe it doesn’t. Like Peachtree Center, much new housing in Atlanta is built without the intention to nourish the imagination. Beehives in Midtown may offer striking views of other buildings, techy amenities, and stylish furnishings, but they are largely not built with the intention of fostering reverie. We attribute this to the minimalism that is so vaunted now, but it’s not that. It’s about the declining American imagination.

Anybody who has ever ridden with me around Midtown knows that I point out countless old and odd apartments that I have rented over the last 40 years. I have long noticed that my dreams are often set in rooms within these different places. I have even thought of writing a memoir of the way these homes and the ones of my early youth created the person I am and will become. The moral of my story? The nature of spaces creates us as much as we create them. Don’t live in a box.