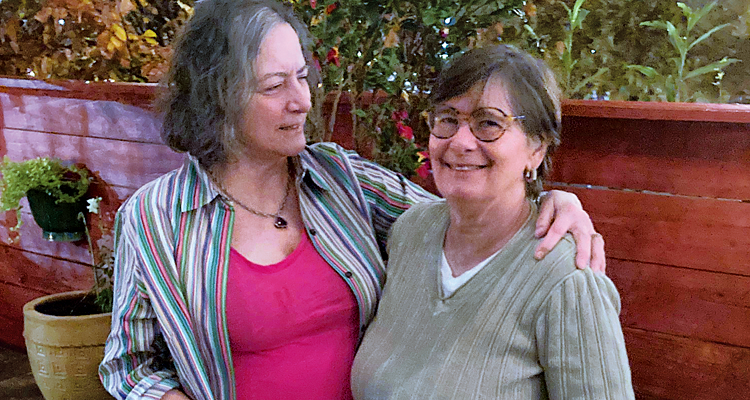 “As I See Myself, Growing Older”

It’s no secret. I’m one of those infamous baby boomers. I know, I know; you’re sick of hearing about us.

Turn that aside for another time. Because this is a historic moment, when we’re all being forced into the isolation of our homes. Except for those who must work or care for others outside, need to get groceries, or take (unconscionable?) risks.

There have been other historic moments of isolation, but I best remember isolation outside my home, in the ‘70s and ‘80s, enforced by people who stopped talking to me when they “found out,” who waited for the next elevator to avoid breathing my air, who tried to sabotage my work or vomited venomous hate with lines such as “AIDS is God’s gift to get rid of you people.”

Trying not to internalize that shit, I stuck my chin and tits out, saying “fuck you,” sometimes literally, but usually via very public political and cultural actions. What has this got to do with our newfound enforced solitude? The evils of feeling unaccepted, unloved, lonely within the crowd of “us,” existed then, even as queer visibility increased. Other baby boomers found themselves alone, unable to get up from their hospital beds or leave their apartments unless evicted.

We as a community created ways to assist, to stay together, to stay alive. Today we as a community must address the physical needs, as well as the loneliness and isolation, of enforced distancing and facial concealment, with its lethal cocktail of depression, substance abuse, even suicide.

Or we can draw inward in other ways. Me? I’ve binged-binged-binged TV. Fuck the book! But even then, all the political money stuffing the media maw sticks in my craw. Gods! Even when the spousal unit yells “I will leave you if you don’t shut up!” I still shout at English and Spanish TV, “Stop fucking lying!”

I continue to live with the same woman I “hooked up” with 24 years ago. In this, I am very lucky. “Loneliness and social isolation may represent a greater public health hazard than obesity, and their impact has been growing and will continue to grow,” according to research presented at the 125th Annual Convention of the American Psychological Association in 2017. We know things have only gotten worse; it’s all around us.

Despite my TV lobotomy, I’ve thought about Rebecca Ranson. She’s our now-deceased one-woman Arts Engine and Arts Engineer. Among hundreds of things, she organized SAME (Southeast Arts, Media and Education) in Atlanta. For one SAME event, she invited some Atlanta-based lesbian writers over 40 to participate in a show called “As I See Myself, Growing Older.”

I don’t have my notes now, but I recall Rebecca doing a monologue as her alternate persona, “Brownie,” on turning 60. Brownie lived such a life, it amazed her. She looked in the mirror, at the eyes that have witnessed all. “But I miss the face,” she said, her face now deeply lined, with some real crevices.

At 40, I didn’t understand. I was still tall (5’8”), dark (almost-black eyes and hair down my back) and handsome (a word regrettably seldom used now in relation to women).

I did not suspect that down the road within a four-year period I’d be forced from my job of 32 years, which provided a real sense of myself, nor that I’d have more than a decade of enforced idleness from various parts-replacement surgeries and blinding chronic pain, nor that my beloved mother would die young from a weird autoimmune disorder, nor that my “I’m your biggest defender” grandmother would shortly follow her cherished daughter into the light, nor that I would lose the looks and spirit that kept so many interested. The list goes on.

I knew something about inconsolable pain, helplessness and depression before COVID-19. And bromides like “just have a little faith” offer as much comfort as the cats using their box.

But some deep-down bone and blood refuses to break apart. I’m a warrior, a fighter. And on my good days I see my own worth at this historic moment. And I know I’m not alone in this, queer family. We’re still strong.

And those lines in my face? Earned.