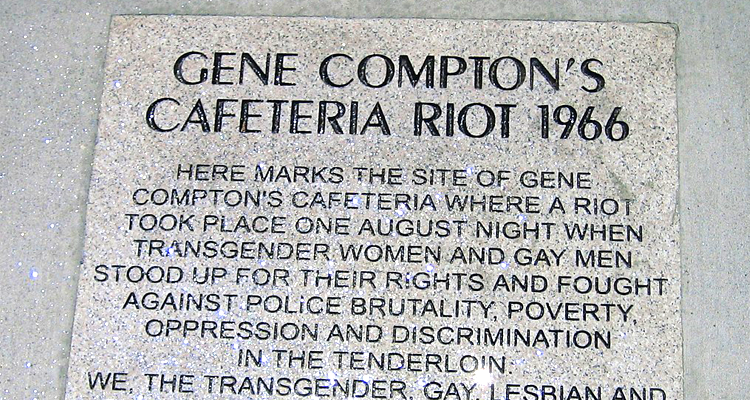 Before Stonewall, There Was California

In June, you’ll hear all about the Stonewall Rebellion and how electrifying it was, and how it marks the BEGINNING of The Gay Rights Movement.1 But a number of queer Californians reacted to news of Stonewall with a shrugging, “well, it’s about time the East Coast caught up with us. We’ve had our riots for years.” California a decade before Stonewall? Surf and sunshine and sex … and the Free Speech movement, Black Panthers, farm workers, women, Chicano liberation, hippies, anti-war movement, Mattachine, Daughters of Bilitis … and legal, capital H-sized institutional homophobia. Riot-causing homophobia. These are events we don’t usually hear about in the post-Stonewall age. But these moments also helped bring queer people into the 21st century. Only two riotous moments follow:

1. Ten years before Stonewall, Cooper’s Donuts was a 24-hour joint in Los Angeles, literally on Main Street, the main drag for L.A.’s 1950s and ’60s Skid Row and “Gay Ghetto.” Cooper’s was snugly ensconced between two gay bars. Trans people, drag queens, street kids, dykes, and the strung out all hung out there. The management was equal-opportunity friendly, serving cops and queers alike.

One early morning in May 1959, two cops came in, simply to beleaguer the queers with an ID check. No ID? Jail. An ID with information that does not agree with your gender presentation? Better believe you’re headed for jail, charged with the crime of “Impersonation.” Impersonation could include not wearing enough of the clothing expected for your ID’s typed-in sex, three articles being the minimum, or if a cop simply didn’t like your look or attitude.

Five individuals were slated for arrest that morning, including the butch appearing, sometime hustling, and soon-to-be-celebrated author John Rechy. In fact, he wrote about this event in his (dare we say) seminal book, City of Night.

This law enforcement “harass and arrest” ritual usually went down as smoothly as a priest genuflecting at the altar. But Cooper’s regulars, especially the cross-dressing queens, were fed up. Sick of the street sweeps, shakedowns and violence, they began to express their frustration with a furious physicality: they threw doughnuts, coffee cups, everything they had on hand. Bystanders from the bars happily joined in the chaos. And queers actually drove the cops off! Reinforcements for the boys in blue appeared in short order. But you can’t bring enraged queers to heel once we act up. Main Street was shut down for hours and Rechy and two others managed to escape from their cop car confinement.

2. In 1966, Compton’s Cafeteria, located in the sleazy Tenderloin area of San Francisco, was a 24-hour place where queer street people and others gathered for late-night food and companionship. It was “our place,” as a regular customer put it. Ours, until the gay night manager retired. Regrettably, the guy who took his place did not like the look or “noise” of “those people.” Periodically, employees called the police to come and do the “ID Check Shuffle.”

1966, though, was a summer of resistance, where night after night young people of all stripes, including politically radicalized liberationists, defied police efforts to get them off the streets. In July, queer street youth and friends, outraged at that summer’s particularly constant harassment, formed a group called Vanguard. Vanguard loudly picketed outside Compton’s, protesting the persistent maltreatment. One August night, two patrons got into a scuffle, the police were called, and everyone knew the ensuing drill. But instead of going quietly, the first trans woman grabbed by the arm threw a cup of coffee in the grabby officer’s face, and then almost everyone in the packed place began hurling everything around them, including furniture. A few “perverts” even bashed the cops with purses and heels.

And queers drove the cops out! Plus, Compton’s rather large plate glass window was smashed, and for good measure, a few fires were lit (unfortunately, damage was sustained by nearby, non-Compton’s properties).

The next day and night, the heavy picketing seriously locked down automobile traffic. Police tried to disperse the protestors, as well as their seat-occupying sisters. Rioting broke out again, and the newly replaced plate glass suffered the same fate as its predecessor. The following day, Vanguard organized a Street Sweep-In: they got out brooms and swept up and down the street, letting everyone know what they thought of the “sweeping the streets” police tactic.

Amazingly, all the attention brought a sustained outcome. Over the succeeding months, social services attention began to focus on the trans community, eventually building an infrastructure. And a major demand was getting the sweeps and arrests stopped. (NOTE: the rock band Buffalo Springfield recorded their song, “For What It’s Worth” with lyrics specifically written to capture the sense of the nightly street-walk-and-protest phenomenon throughout that summer, in San Francisco and Los Angeles. It was released in December 1966)2.

Today, there is a plaque in front of Compton’s commemorating the riot. It anchors what is officially known as the Transgender District, the first area on the planet to legally recognize transgender history.

Before Stonewall, there were queers in the United States who said, “No more!” and roared in fight-back mode. Doughnuts and push brooms and beating back cops may not be as dramatic as bricks and tear gas and making cops fear for their lives3, but all of these actions are spiritually connected and helped move us from supine to upright.

1. Pre-Stonewall life could indeed be dark; one slang term for us was “twilight people.” But that life also included hopeful, authoritative and very brave queers and public actions: “her ‘special’ friend,” the Sip-In at Julius’ Bar, Daughters of Bilitis, Bachelors for Wallace, the Council on Religion and the Homosexual (in fact, the entire Homophile movement), Black Cat and Patch protests, the Committee for Homosexual Freedom, Friends of Dorothy, Society for Human Rights, Dewey’s Lunch Counter, the Kinsey Report, P.R.I.D.E. (Personal Rights in Defense and Education), etc.

What a field day for the Heat [i.e. police]

A thousand people in the street

Singin songs, and a’ carryin; signs ….

Are gettin so much resistance,

And takes you away.

Everybody look what’s going down ….

3. Police Lieutenant Seymour Pine, from New York City’s Morals Division, led the raid on Stonewall. Pine had been in the Army during World War II, serving at the Battle of the Bulge. He authored a well-respected manual on hand-to-hand combat. Yet, when he recounted being trapped inside Stonewall, he said: “We knew we were in trouble … [and t]here was never any time that I felt more scared than that night. The moment you stepped out that door, there would be hundreds facing you. It was terrifying. It was as bad as any situation that I had met in during the Army, had just as much to worry about.” NOTE: philosophical toward the end of his life, in 2010 the retired Lt. Pine offered an apology for the raid. And, given the advent of modern Pride, he mused, “If what I did helped gay people, then I’m glad.”