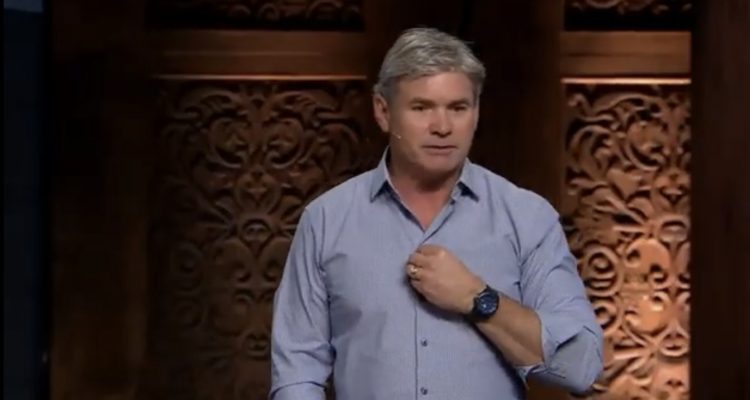 Creep of the Week: Jack Hibbs

Yet, it sure seems like some folks haven’t gotten the word that people have sex for reasons other than making babies.

One such person is Jack Hibbs, pastor of Calvary Chapel church in California.

During a July 11 sermon, Hibbs decided to own the evolutionist libs by giving a very well-researched lecture on elks doing it in order to prove that homosexuality is pretend.

“When two people of the same sex get together, it’s out of sheer wanton lust and pleasure only for self,” Hibbs tells the congregation. “Nothing comes of it. No life can come from it. No family can come from it.”

Well alrighty, then. Having sex for pleasure is bad, very bad.

“If you’re an evolutionist, you have to be against same-sex union,” Hibbs continues. “In evolutionary theory, the survival of the fittest has to procreate.”

Hibb’s then launches into a kind of Christian Animal Planet episode to back this up.

“That’s why you watch, they study all the animals, and there’s the big elk, the big bull elk,” he begins. And already we’re on shaky ground.

“And what does he have to do every spring? He has to take on the young elks. Beat ‘em up,” he says, punching a fist into his hand to illustrate how elks fight. “And the strong one, the strong one by natural selection, the strong one survives.”

Got it. Mr. Elk has kicked the ass of all the junior elks. And what does Mr. Elk do next?

“He impregnates all the other, uh, elkees,” Hibbs says, and the crowd starts laughing like they’re watching a stand-up comedy routine. “I don’t know. Does? Elkettes? I don’t know.” This is the pinnacle of evangelical humor right here.

I mean, one could point out that he’s trying to use elk mating as evidence to back up a pretty bold claim and that the fact that he doesn’t even know that female elks are called cows hurts his credibility on this subject. But why spoil the fun?

“And so he looks over his harem, and they’re all producing babies, and he’s like, YES!” Hibbs says, giving his stamp of approval on promiscuity. “And evolutionists say, ‘Right on! That’s it, see? It’s in action!’”

“But if evolution is true, then there would be no such thing as homosexuality, because over the last 400 trillion, billion, zillion, quadbillion, zillion, nillion, years,” he says, the audience once again laughing at his hilarity, “evolution would have washed that out.”

I… don’t think that’s how evolution works? Because that would mean that all non-procreative sex would die out. Blow jobs would not be a thing, for example. All Hibbs had to do was Google “blow jobs,” and he could have spared himself this embarrassment.

Oh, okay. I think that’s supposed to be a compliment?

He continues, “Because God’s word says this would be some of the outcome and actions of the Last Days.”

Ah, got it. Not a compliment. He’s saying the existence of LGBTQ people doing “actions” is an end times thing.

I’m not a professional evolutionist or anything, but queer sexuality and “actions” have always existed. Even in non-human species. So if such things still exist, maybe it’s not something that can be explained using an incredibly simplistic view of what is a very complicated and heavily researched kind of science? And by Hibbs’s logic, wouldn’t that mean we’ve been in the Last Days literally forever?

Ugh. This is the longest Last Days of my life.