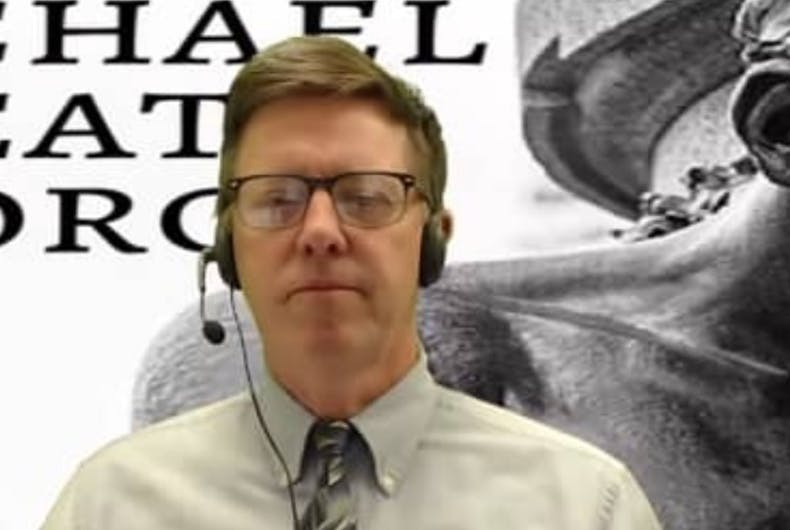 Creep of the Week: Michael Heath

Corporate America, man. Who knew they had the power to do seemingly impossible things like getting the Washington football team that uses a racial slur as a goddamn mascot to change its name? I mean, the team has had a LOT of pressure over the years, especially from native Americans and everyone who thinks racism is bad, but it turns out that the pressure just wasn’t rich enough.

I’m kidding. Of course we knew that corporate America has the biggest and loudest voice in this country, and they amplify that voice through a megaphone made of their pockets. And inside of those pockets is money, although no one’s real pockets could ever hold so much…  Never mind, you get the picture.

It took FedEx threatening a major financial blow against the team to get team owner Daniel Snyder to finally agree that, OK, maybe a racist mascot is not great. Needless to say, a lot of, mostly white, people are pissed and this has really ruined an otherwise perfect summer for them.

Not that I’m in the business of praising FedEx, but it is nice to see a corporation use their powers for good rather than evil.

So a tip of the hat to FedEx for firing Michael Heath.

Heath, an internet minister, spends a lot of time thinking about gay stuff and really loves to use the F-word. This has led many folks responding to the news of his FedEx firing on Twitter by calling him a “closet case” who is going to have his “Larry Craig moment” when his Grindr profile is leaked.

Honestly, these jokes only further cement the idea that being gay is a punchline, which hurts all LGBTQ people. I don’t care if Heath is gay or not. He’s a hateful and deeply unhappy man who has devoted his life to hurting other people under the guise of loving Jesus.

Heath announced in February that he was going to “do a world tour” called, well, it doesn’t bear repeating but rhymes and means “gay men are fly larvae.” He was inspired to go on this hate tour by Donald Trump.

“I’m going to do a world tour,” Heath said on Dave Daubenmire’s “Pass The Salt Live” show earlier this year, according to Right Wing Watch.

“I started supporting Donald Trump early in the 2016 primary for one reason: He insults his enemies. He makes things personal that deserve to be personal,” he said. “The decades of leftists being the only ones allowed to make everything personal are over. It’s long past time for WASP manners to take a back seat to the truth.”

WASP manners? Has he SEEN how white people behave? It is amazing to me that anyone with even a glimmer of knowledge about the history of this country would think that WASPs are the good guys.

By the way, the “tour” was supposed to start on June 26, 2020, on the anniversary of the Obergefell ruling. I suspect plans were derailed by COVID-19, but who knows? Heath might be coming to a Hobby Lobby near you.

Anyway, Heath appeared again on Daubenmire’s show to lament that he had lost his job as a driver for FedEx because of his deeply held religious views that gay men are fly larvae.

Actually, to hear Heath tell it, he wasn’t “fired” he was “disqualified” because apparently we all live in a live game show called “Hi, We’re in Hell” right now.

Heath says that FedEx decided that “he said homosexuality is wrong, he used the word f-ggots, he can’t represent us anymore.”

Can’t say I blame them.

Heath does, though. In a column on his Helping Hands Ministry site (because of course) titled “Am I Allowed to Have an Opinion?” he begins with the epigraph “God hates f-gs,” made infamous by Fred Phelps, who Heath claims was “more right than wrong.”

Boy, between Trump and Phelps this guy really knows who to idolize.

I don’t know if this column was written before or after the FedEx “disqualification,” but in it he writes, “I believe that sodomy is gross and disgusting.”

Well, thanks for letting us know. We’ll note it on your chart.

“Strong enough words don’t exist in any language on earth to accurately describe this wickedness,” he continues, explaining that “gay men are fly larvae” comes the closest. “Typing out the phrase [‘Gay Men are Fly Larvae’] seems to help for some reason. I think these accurate English words tap into a fundamental spiritual need of our age.”

I can’t help but picture that scene from “The Shining,” only it’s Heath behind the type writer furiously typing “Gay Men are Fly Larvae” over and over in order to meditate. Definitely a totally normal and well-adjusted person.