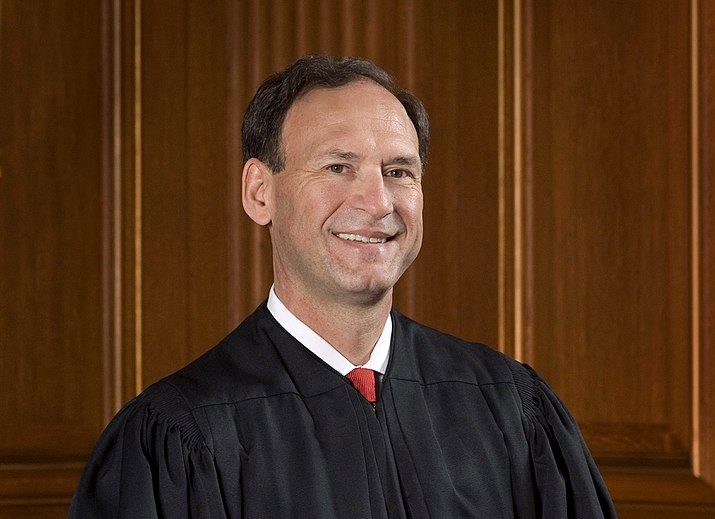 Creep of the Week: Samuel Alito

In 2015, the Supreme Court’s Obergefell v. Hodges decision changed my life. That decision meant that Michigan had to recognize my legal marriage to my wife and that, as her spouse, I could be covered under her health insurance. I was also able to legally “adopt” my own son. And it couldn’t have come at a more crucial time for my family, seeing as I had breast cancer at the time. I’d had surgery on my 37th birthday in April and in June, when the Obergefell decision was issued, I was getting chemo. And it sucked. Do not recommend. All thumbs down. Except for the saving my life part. Worth it.

So, while my family was celebrating — I mean, as much as we could celebrate considering that I was kind of a downer at the time — one thing I neglected to ask myself was, “How does Justice Samuel Alito feel about all of this?”

Well, it turns out the answer is: not great. I mean, considering that he was one of the four justices who dissented, that’s not really a surprise.

In his dissenting opinion he wrote that marriage was “inextricably linked” to making babies and that the decision would “be used to vilify Americans” who didn’t support marriage equality.

On Nov. 12 during his keynote address at the 2020 Federalist Society National Lawyers Convention, which was held virtually even though conservatives don’t even believe in the novel coronavirus because is proof of their oppression, Alito made clear that he is not. Over. It.

The Federalist Society is, of course, an ultra-conservative group of attorneys from which Trump has plucked many of his judgeship appointees. They no likey the gays.

Alito told the group that “religious liberty is fast becoming a disfavored right” in America. That is completely divorced from reality. Then again, “religious liberty” doesn’t mean religious freedom, because that would include Muslims and stuff and the Federalist Society is not down with that. Religious liberty means white Christian dominance and unfettered power to discriminate.

Is he mad about good Christians like the folks at Masterpiece Cakeshop being forced to make wedding cakes for gays? You betcha. Not only, Alito pointed out, did the couple in the Masterpiece Cakeshop v. Colorado Civil Rights Commission lawsuit get a free cake out of the whole thing — from another bakery — but “celebrity chefs have jumped to the couple’s defense.”

Whew. What a relief for every LGBTQ couple seeking cake. Apparently they get it for free! Free cake for gays from celebrity chefs! Why am I just now hearing about this? Clearly anti-equality folks are fueled by jealousy because FREE CAKE. Obviously straight people are going to pretend to be gay just for the cake now. And who could blame them?

Alito goes on to point out that “until very recently” the “majority of Americans” thought that marriage was a union between a man and a woman. But now that’s “considered bigotry.”

This is true and is strictly enforced by Antifa.

“That this would happen after our decision in Obergefell should not have come as a surprise,” he said.

He saw it coming all along and points to what he wrote in his dissenting opinion at the time: “I assume that those who cling to old beliefs will be able able to whisper their thoughts in the recesses of their homes. But if they repeat those views in public, they will risk being labeled as bigots and treated as such by governments, employers and schools.”

In other words, no one will be able to speak about one-man-one-woman marriage ever again in public. People clinging to this idea will end up committed not to a person of the opposite sex but to insane asylums. They’ll all be living out their own real-life version of “The Yellow Wallpaper” — it’s a short story, read it. I can’t explain everything to you.

Then Alito says, “That is just what is coming to pass.”

I just checked and it looks like governments, employers and schools still allow heterosexuals within their halls, in their employ and in their classrooms. The memo must not have been widely distributed. You know what they say: change takes time. Then again, there are fewer weddings happening at the moment…

Oh my God. I just realized that the reason there have been fewer weddings isn’t because of COVID-19. It’s because of the gays! What have we done? Will we never be happy until heterosexuality is destroyed? Is that what it all boils down to?

If only I would have known that my family’s legal recognition and the safety and security that has brought us would hurt so very many people. “Obergefell!” I yell, shaking my fists at the sky.

“One of the great challenges for the Supreme Court going forward will be to protect freedom of speech,” Alito said.

It turns out that freedom, just like everything else on the internet, is actually cake. Grab your free slice before Alito and the conservative majority on the Supreme Court take it away.