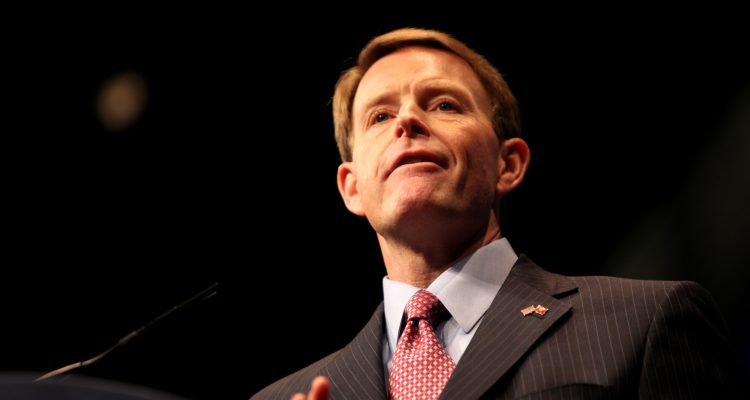 Photo courtedy of Gage Skidmore via Flickr under CC BY-SA 2.0

Creep of the Week: Tony Perkins

Aside from women daring to make their own reproductive decisions, there’s nothing right-wing conservatives hate more than Pride Month. The “rainbow deluge” the Family Research Council’s professional hate monger Tony Perkins calls it. Honestly, Rainbow Deluge sounds like the name of a bar with a wild foam party night.

Ha. No. Of course not. Perkins is mad at the RNC Chairwoman Ronna McDaniel for putting out the following message on Twitter: “Happy Pride Month! The GOP is proud to have doubled our LGBTQ support over the last four years, and we will continue to grow our big tent by supporting measures that promote fairness and balance protections for LGBTQ Americans and those with deeply-held religious beliefs.”

Utter, utter bullshit. You can’t balance protections for LGBTQ+ people and the deeply-held religious belief that LGBTQ+ people are sinful perverts who don’t deserve protections. But the GOP probably is sincere about being proud that they’ve doubled their LGBTQ+ support because that means more people are willing to have their authentic selves denigrated in order to elect racists. Clap, clap, clap. Such progress.

Perkins called it “an alienating tweet that irritated everyone,” and I agree!

Perkins posted a response on the FRC’s website on June 4. He said that McDaniel and the RNC were pitting themselves against those “racing to stop LGBT extremism.”

“If McDaniel was looking for a way to end her party’s record-breaking fundraising, she nailed it,” Perkins writes.

Honestly, I’ve never wanted Perkins to be so right. It would be awesome if the RNC were tanked by a completely disingenuous Pride tweet. That would be so beautiful. Like gold at the end of a rainbow.

Further dragging McDaniel, Perkins writes, “Right now, there are few things she — or any Republican — could have said that would have been more tone-deaf and offensive than applauding the woke agenda her base is trying to combat.”

Oh, I can think of a few things that the GOP base would find more tone-deaf and offensive. How about “Black lives matter” or “What happened on Jan. 6 was an affront to everything this country stands for and we must get to the bottom of it” or “Joe Biden is the duly elected President of the United States”?

Perkins acknowledges that McDaniel’s tweet didn’t make anyone happy. “The Left will never be pleased by these half-baked GOP olive branches,” he writes. So true!

The Pride tweet wasn’t really intended for “the Left,” nor was it intended for the GOP base, most of whom aren’t even on Twitter (there are around 68 million users in the U.S. which means very few Americans are on Twitter in the grand scheme of things).

McDaniel’s tweet is intended to appease groups like the Log Cabin Republicans who need something, no matter how small, to point to in order to justify their support for a party that truly, madly, deeply hates them. It’s also to provide for plausible deniability. A tiny alibi for a party going off the ideological rails hell bent on destroying Democracy with the most extreme anti-American agenda in modern history.

It really cannot be overstated how radically dangerous the Republican Party is right now. That people like Perkins think that a transgender person using the bathroom at Target is this country’s greatest challenge shows you exactly where he stands. He’s for it. Burn down Democracy and install a Christian Dominion President who will tear down the remaining laws between church and state. You know, like the Taliban. Also worth noting that Trump is probably the top pick for such a role even though he isn’t really Christian, because the whole “loving God” thing is secondary to these folks if it’s even important at all.

The scary thing is, plenty of Republicans don’t think that the party is crazy enough.

“According to a new poll by Rasmussen, GOP voters think it’s past time for their leaders to reacquaint themselves with the party’s values,” Perkins writes. “In numbers that ought to chagrin headquarters, half of all Republican voters think the party’s leaders aren’t conservative enough.”

Yikes. DO YOU HEAR THAT JOE MANCHIN? GET RID OF THE FILIBUSTER. JFC.

If anything, Republicans have been pretty clear about what they value. And it isn’t “law and order,” it turns out. That just means policing Black people. Right-wing conspiracy theorists completely out of touch with reality who storm the Capitol resulting in deaths? They’re just excited tourists. It isn’t “protecting women” unless that means protecting them from the completely made up risk of transgender predators rather than addressing the fact that violence against women is a real problem and if only there were, say, a Violence Against Women Act they could support that would address that. And it isn’t “protecting life.” That just means forcing women to have babies whether they want to or not. Republicans can’t call themselves pro-life since they just stood back while over 600,000 people in this country were killed by a virus that many of them claim isn’t real.

Perkins writes of Pride Month that “the air of LGBT pride is so suffocating that people could choke.” My advice to him? Wear a mask.