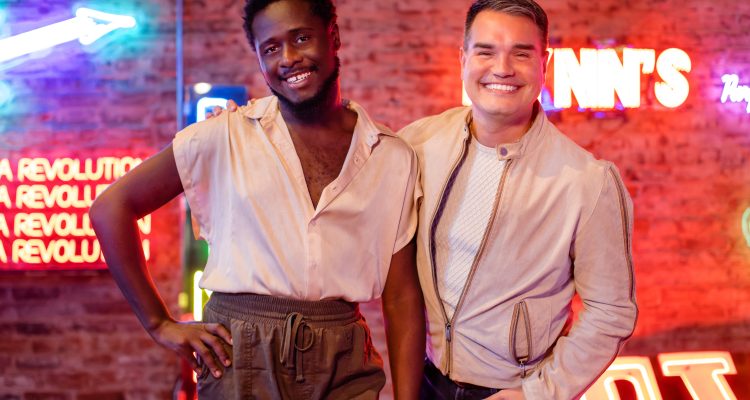 Brand Photography in Atlanta, Georgia for The Gayly Dose Podcast

Dante and Helmut: In Conversation on LGBTQ Representation in the Restaurant Industry

D: Working in the hospitality and food and beverage industry has been one of the hidden gems in the success story of my life. I’ve spoken briefly about it on the podcast, but the journey of working in a restaurant has put me in a position where not only have I been given the chance to be myself, but in doing so I have been afforded opportunities that I would have never dreamed of.

The history and story behind many great restaurants have been built on the backs of queer people from all over the world. Think of some of your favorite chefs on television, or waitresses at your favorite local restaurants, and there is a good chance they belong to our amazing community. Whether you know their story or not, from my own POV it is because it is one of the few industries where we are allowed to be ourselves, and in most places throughout the world our sexuality is what hinders us from getting anywhere significant in life.

H:  When I hear Dante’s voice, I hear in him a refreshing perspective that has been earned by the countless gay peoples of the past. I think of the Daughters of Bilitis and the Mattachine Society and how these groups were born in secret because your name and place of employment was published in the papers when you were arrested so that you could be fired or worse.  How in our episode with Abby Drue we learned about how dead bodies of gay men were dragged from Piedmont Park. Today we struggle for trans lives, but we will continue our evolution.  I just love to hear how much has evolved!

D: I personally hope that moving forward, we see this acceptance move its way into other industries so that people can live their life in spaces that they occupy. And whether it is sexuality, personality, appearance, or creed, it is time that we let people’s talent and work ethic trump how they present themselves. We need to move on from these antiquated ways of gauging people’s success potential and accept them for who they truly are. This is the world everyone deserves to live in as we move into the future.

H: I honor and echo Dante’s dream! I hope we will continue to see gay youth take on more ownership of businesses as entrepreneurs. In the end, many industries are dominated by straight white wealth, and it is through the efforts of young gay people of color, women, and other minorities that we can continue to see our world become what it should be: a place where you can wine and dine with all tribes, funded by all tribes, and to the benefit of all tribes. In the end, our love for the simplest things to share at the dinner table will indeed be a celebration of our shared humanity!

Dante and Helmut are the founding cast members of The Gayly Dose, an Atlanta based podcast that elicits vulnerable and honest dialogue about everyday and taboo topics that LGBTQ+ people aren’t having with each other…but should. Purposefully candid and brutally honest, the cast speaks on a range of topics including gender norms, monogamy, body issues, coming out, dating apps, lesbian breakups, and growing up gay in the church. Listen and watch the new Season 3 at thegaylydose.com