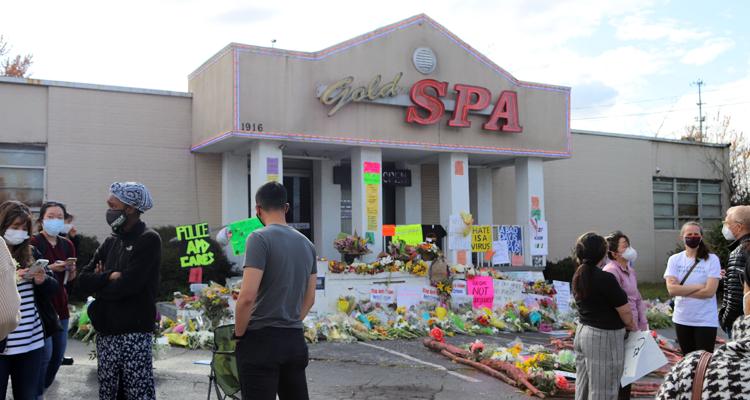 Memorializing the victims of last month’s shooting spree at local massage parlors, Atlanta media have sounded like family members giving duplicitous eulogies for deceased relatives they trashed while alive. Unfortunately, one way for anyone with proximity to the sex industry to be respected in America is for them to be gunned down in a senseless massacre.

The ensuing news segment featured a photo of one of the victims with her two sons, one of whom spoke about his mother’s nightly ritual of checking on her boys to make sure they were OK. Another report described the anguish of a husband being separated from his fatally injured wife after “the newlyweds had gone for a date night massage.”

Media outlets have focused on the racial elements of a white gunman targeting Asian women, and a podunk sheriff’s spokesperson minimizing Christian terrorism by saying the sexually deranged shooter “had a bad day.” News organizations have not yet contemplated how their coverage of Asian massage parlors prior to the shootings uniformly characterized these “loving mothers and good friends” as menaces to an area’s residents and property values, or a “date night massage” as a felony.

Located just off Cheshire Bridge Road, the massage parlors match the profile of what Atlanta Magazine classified as “less-than-desirable businesses” in 2013, when then-City Councilmember Alex Wan was trying to untwist the bulb of Atlanta’s red-light district. Wan, who is gay, derided opposition to his campaign by accusing his critics of reducing “the gay agenda [to] 24-hour bars and sex clubs.”

Sadly, queer folks can be just as condescending toward sex workers as corporate media or pandering politicians. It’s unclear whether the most popular online activity for gay men is climaxing to pornographic videos or belittling the performers in them, a dichotomy that sits on the same twisted spectrum that made the Atlanta shooter desire Asian women so much he was supposedly trying to assassinate his temptation.

It should not take bullets to deliver dignity to their experiences, nor death for the media and our society to recognize their humanity. Part of the LGBTQ agenda since before Wan or I hit puberty, the freedom to fuck is not only about orgasms, but making sure sexual pleasure and proficiency are no longer grounds for the denial of grace.