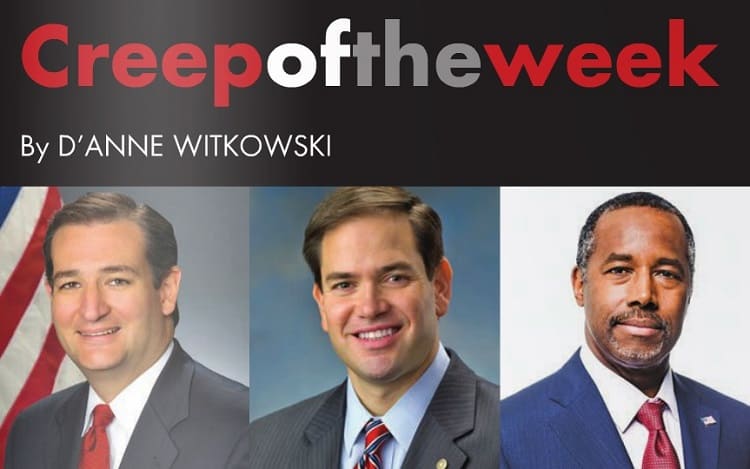 Making sure that gays and lesbians were never afforded legally recognized marriages was the focus for the anti-gay right for so long. So many resources were poured into stopping John and Bill from saying, “I do” that ever since the Supreme Court said yes to marriage equality, anti-gay groups have desperately been trying to regain lost ground.

So shortly after the Supreme Court ruled, a bill was introduced in Congress called the “First Amendment Defense Act,” which would essentially shield anyone who wants to discriminate against LGBT people. Because discrimination is a religious right and the First Amendment protects “the free exercise of religion.”

Needless to say, the anti-gay right would love to get this bill signed into law. But they know it will never go anywhere without a president’s support. And so they have asked the GOP dunce troupe of candidates to sign a pledge in blood. Okay, I made up the blood part (or did I?), but the pledge reads, “If elected, I pledge to push for the passage of the First Amendment Defense Act (FADA) and sign it into law during the first 100 days of my term as President.”

Carly Fiorina, Rick Santorum and Mike Huckabee also signed on to support this ridiculous bullshit, but they are trailing so far in the polls that, well, nobody cares what they think.

According to the American Principles Project, front-runner Donald Trump has expressed support for FADA but didn’t sign the pledge. Since barely a word of what comes out of Trump’s mouth is true, this doesn’t really mean much. But it would be a mistake to think that Trump is for, or even neutral on, LGBT rights.

According to the Family Research Council, a group that has made its name by hating on the gays, “FADA would prohibit the federal government from penalizing people for their personal, moral or religious beliefs on natural marriage in federal employment, grants, contracts, tax treatment and other programs. It also protects individuals or entities that believe, teach or establish in codes of conduct that sexual intimacy is reserved for natural marriage.”

That covers an awful lot of ground on which someone can say, “God told me to hate gays so you can’t touch me.” The intended consequences would be terrible for LGBT people, and no doubt there would be plenty of odious unintended consequences, too. Not to mention the fact that support for marriage equality is only growing in the United States.

“Natural marriage,” as you can guess, is the new “traditional marriage.” That’s because positioning same-sex marriage as “unnatural” sounds worse than merely “untraditional.”

But Carson, Rubio and Cruz don’t care. They signed the pledge because they want those sweet, sweet “values voters” to sit on their laps so they can tell them what they want to hear. And don’t you dare say “happy holidays,” because the only religion these guys are trying to protect is Christianity, specifically the gay hating kind.

According to American Principles Project’s Maggie Gallagher, “Real, concrete protections for gay marriage dissenters appear to be just one election victory away.”

That is, of course, if Americans are dumb enough to elect one of these extremists.