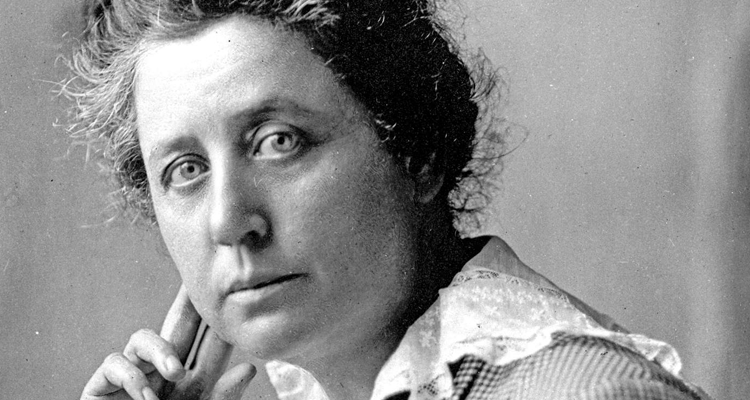 A Massachusetts native, Dr. Marie Equi was born into an Italian and Irish home. She spent much of her early life in Italy. As a 21-year-old, she moved with her “Boston Marriage” wife, Bess Holcomb, to The Dalles, Oregon, in 1893.

Bess had been offered work there as a teacher. According to subsequent newspaper accounts, Holcomb’s employer, Reverend Orson D. Taylor, refused to  pay the promised $100 salary. In a heated and loud confrontation, Marie threatened to publicly beat him with a horse whip.

And she carried out her threat! Regrettably, Bess didn’t receive the promised $100, but the community very much supported this action, and so the whip was raffled off. Marie and Bess received the proceeds, which exceeded $100.

The couple moved to San Francisco, but Marie went on to Portland, Oregon, where she graduated from medical school and then set up her practice in 1903. She became one of the very few doctors who openly performed abortions, and she did so for women of any class, race or ethnicity, including non-English speaking immigrants.

Following the 1906 San Francisco earthquake, Marie organized a group of Portland doctors and nurses to provide humanitarian aid to the devastated city, an action which earned her a special commendation from the U.S. Army.

Soon after, she met Harriet Speckart, who began to work as Marie’s assistant. The two began a 20-year relationship, sharing residences in San Francisco and various locations in Portland. Harriet was an Olympia Brewing Company heiress. Her family threatened her with disinheritance if she did not leave Marie. Harriet refused to abandon her lover. The two eventually adopted a daughter and raised her together.

In 1913, Marie joined a strike action organized by the Industrial Workers of the World (IWW), in support of women workers fighting terrible conditions at the Oregon Packing Company. Police viciously assaulted her while she was attending to a striker they’d beaten to the ground. The systematic brutality employed to end the strike proved a last straw, leading Marie to denounce capitalism, become an anarchist, and join the IWW.

A staunch advocate for women having control over their own bodies, she assisted Margaret Sanger in writing pamphlets advocating birth control, and the two women became lifelong friends. In 1916, they were arrested together as they promoted a national campaign to advance the use of contraceptive devices.

As the specter of the United States joining the war in Europe loomed, Marie joined the American Union Against Militarism. During an anti-war protest in downtown Portland in 1916, she unfurled a banner reading:

The ensuing riot, while minor, led to her arrest. In December of 1918, she was tried under the newly revised Espionage Act for her opposition to the war. “The Red Summer” was only months away. During this terrible time, racial conflict and “Red” hysteria boiled over and then reigned unchecked in much of the U.S. The government swept up tens of thousands, jailed many, and deported thousands of “Anti-Americans.”

During the shamelessly sham trial, Special Agent William Byron of the Department of Justice testified. He gave detailed reports garnered by relentlessly tailing and investigating her. On the stand, he denounced her as “an anarchist, a degenerate, and an abortionist.” She was unsurprisingly convicted of sedition.

Her lawyers were unsuccessful in overturning the conviction. In October 1920, she began her three-year sentence at San Quentin Prison (later reduced to one and a half years). By all reports, she was an extremely difficult, uncooperative prisoner. While incarcerated, she tried to ameliorate the horrendous conditions of the women there. At Christmas, she begged friends to send gifts for 20 or so women whose lives of deprivation particularly touched her.

In 1921, then Assistant Director of the Bureau of Investigation J. Edgar Hoover charged that Marie was “associated with Elizabeth Gurley Flynn, Anita Whitney and Emma Goldman … and was a professional abortionist.”

From 1928 to 1936, well-known IWW agitator and Communist Elizabeth Gurley Flynn lived with Marie. A few years earlier, Marie had nursed Flynn back to health following a heart attack while the firebrand was on a speaking tour of the West Coast on behalf of Sacco and Vanzetti.

As she aged, Marie appeared less in the public eye. But a childhood friend of her grandson visited Marie’s house many times during her old age. He described Marie decades later as a “Holy Terror.” She died in Portland at age 74.