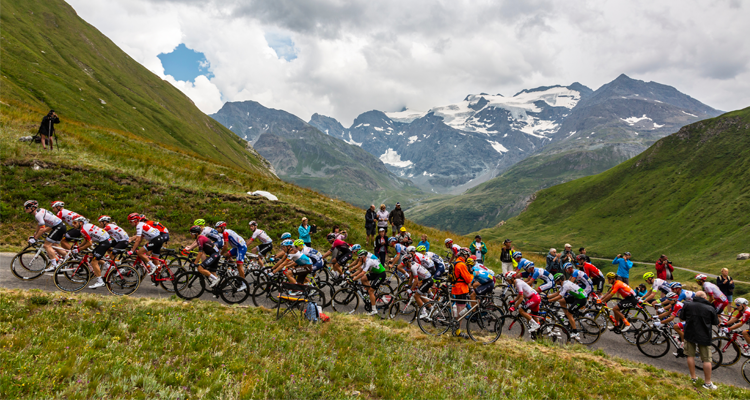 The Peloton climbing the road at Col de Iseran, France during the stage 19 of Le Tour de France 2019. Photo by Radu Razvan via Shutterstock

Recently the Paris Olympic committee for the 2024 Games published a statement announcing that the opening ceremony for the next Summer Olympics will take place along the Seine and not in a stadium as is the tradition. There will be a flotilla of the nations, with each country’s athletes floating on a boat while hundreds of thousands line the river and cheer them on. It’s a marvelous idea and typical of the French flair for making a grand spectacle.

Of course, this is not the first time Paris has hosted the Olympics, but it is the first since 1924, so this upcoming centennial promises to spur the greater Paris region, much like the start of the new year pushes us all off the sofa and into the gym. There is a frenetic network of development throughout the periphery of the City of Light with extensions of various subway lines, new infrastructure, and housing development. Most of the Olympic Village and sporting venues will be in a revitalized suburb that has long been synonymous with poverty and neglect. Whether this burst of investment will permanently transform Saint-Denis into a functioning, rejuvenated neighborhood remains to be seen, but the effort is there to transform it into something better.

When considering the similarities and differences between the American and French approaches to fitness, and indeed beauty, perhaps the most significant distinction is where each begins. Speaking in gross generalities, the French understand the difference between diet and exercise. From the earliest age their meals are smaller, healthier, and their dietary habits are reinforced by a culture that emphasizes eating as a pleasurable, communal experience. Building on this foundation, the French have a more active daily life of what one could call “passive fitness.” Getting one’s 10,000 steps in is fairly easy when living and working in a city like Paris, as is climbing a few flights of stairs on a regular basis.

Additionally, the French are encouraged to pursue sports that don’t necessarily lead to lucrative multimillion-dollar contracts. Yes, there are plenty of young would-be football stars who play and train to land that alluring career in the professional football leagues, but far more enjoy competing in various amateur pursuits such as badminton, handball, or even the traditional Mediterranean game of pétanque. At my gym in Paris, the overhead television screens are set to the French sports channel L’Équipe where, on any given day, they might be broadcasting a bike race (of which the annual Tour de France is the most famous), a pétanque championship somewhere in the South, or a volleyball match between two regional championship teams.

As for the complex relationship between fitness and beauty, I will leave it to sociologists to determine the links. But I will say that the French have always had a sensuality that celebrates the human form — lingerie is a French word for a reason. For the aesthete there are few places more rewarding than sitting at a sidewalk café idly enjoying the parade of Parisians as they walk by on their way home or to join friends for a drink. Even on a working-class salary one can put together “un look” that is unique.

Perhaps this phenomenon of “café culture” inspired the Paris Olympic committee to re-imagine the opening ceremony, with the athletes replacing the street passers-by and the quais along the river becoming our café seating. In any case, in 2024 I plan on bringing a bottle or two of something chilled and festive as I “ooh” and “aah” while the celebration of athleticism floats along.