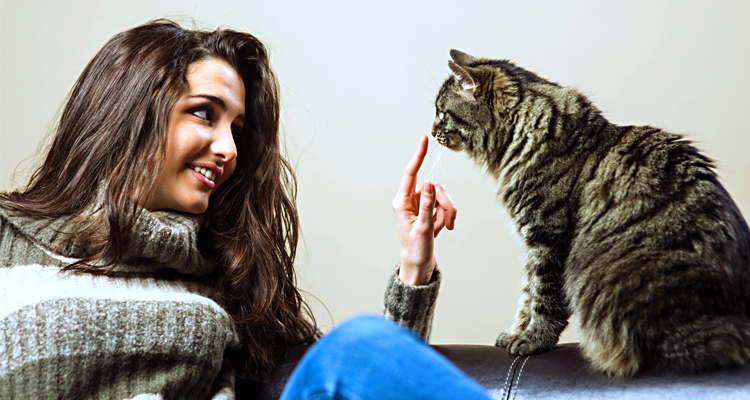 In last year’s pet issue, I wrote an editorial about how animals are like children in that they are both unable to communicate and defend themselves, and the way one treats each is indicative of the quality of their character. Recently, though, I had firsthand experience that taught me just how similar having a pet is to having a child. They’re annoying at times, you love the hell out of them, and you are entirely responsible for keeping them alive.

My dad went on a six-month Buddhist residency, and I was tasked with caring for my two childhood cats: Puffypants and Mittens. They’re siblings, from the same litter, and they’ve been in my family since the moment they were born, about 12 years ago. To say I love these cats is an understatement, and that love grew so much deeper when it became my sole responsibility to take care of them.

To preface this story, I have to note that Puffypants is the fattest cat you’ve ever seen. He is the poster child for gluttony, so it’s a common occurrence for him to eat his food way too quickly and immediately throw it up. So when I came across cat vomit, I didn’t think anything of it. I just cleaned it up and went about my day.

After several days of cleaning up barf, however, I noticed Mittens had stopped eating altogether. I put out her food like normal, and she wouldn’t touch it. Mittens is notoriously picky, so I didn’t panic. I bought the most expensive cat food at the grocery store, I put out her favorite treats, I even cooked her chicken. She wouldn’t touch any of it, and I started to panic.

During this same time, I was finishing a COVID-19 quarantine and my car got towed. So it was a couple days before I was able to take her to the vet. During those two or so days, she quickly lost almost all her weight and started isolating herself in the corner of my bathroom. My childhood pet was dying before my very eyes, and save for my grandmother on her death bed, it was the saddest thing I’d ever seen.

Luckily, I was able to take her to the vet just in time. They gave her an IV and ran some tests to deduce that she has stage 2 kidney disease, which was impacting her appetite. They gave me an appetite stimulant and a prescription for some special food, and soon she was as good as new.

Actually, she was better. Mittens had a new lease on life. Before, she could be a bit standoffish. She didn’t like people petting her too much, and she would more or less keep to herself. But after, she was much more affectionate. She wanted me to pet and hold her constantly, and she would lie on my chest while I was in bed (something she never did before). Mittens had known she was going to die, and I think she knew that, without my help, she wouldn’t have survived. Every time she went to the bathroom to isolate herself and die, I took her out, held and kissed her, and told her she was going to be all right. I took her to the vet, and she came back feeling great. I swear to god, she knew that I did all of that for her. She knew that I kept her alive, and she was genuinely grateful.

Cats get a bad rap for not being the most loving animals, but after that experience, I truly felt like she loved me — or, at the very least, I knew with 100 percent certainty that she knew I loved her.

Our pets aren’t just our companions and buddies. They’re our family, just as our own children are. That experience cost me an arm and a leg and some serious emotional distress, but protecting and caring for Mittens, I experienced a love so deep and sacrificial, I truly felt like a mother. That is a feeling I will cherish for the rest of my life, and once Mittens does eventually pass away, I know I’ll mourn her with the same devastation I would any other member of my family. For now, though, I’m eternally grateful that she’s alive and I get to enjoy the privilege of loving her for a little while longer.