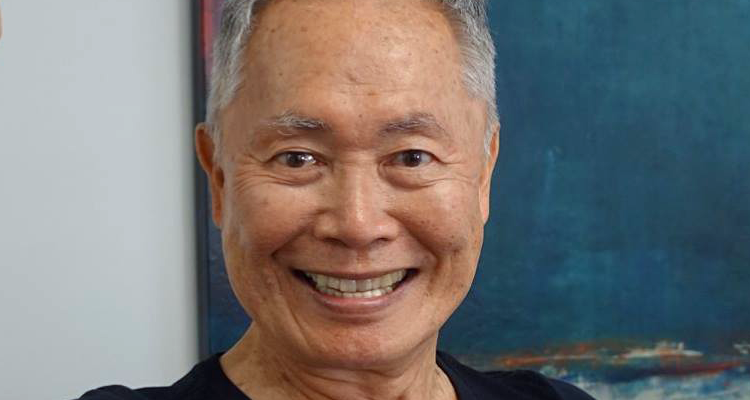 No one could have predicted the lives (and yes, I mean lives — this man has crammed more into one life than a horde of others could) the interplanetarily renowned actor, author and activist George Takei would lead when he was born in Los Angeles in 1937. His parents had emigrated from Japan and met and married here, becoming U.S. citizens. George and his two siblings were born in California, automatically making them American citizens.

His family was on track to becoming middle class when Japan bombed Pearl Harbor on December 7, 1941, derailing everything. Immediately, the Department of the Treasury froze the assets of all citizens and resident immigrants born in Japan, while the Department of Justice arrested 1,500 religious and community leaders who could “potentially” be dangerous.

Vigilante attacks against Asians began, with acts including throwing paint and smashing windows to assaults and arson. George’s family was among the victimized. Spontaneous demonstrations and larger, more organized ones began. “Lock them up” was among the least atavistic and more publishable chants.

In fact, “locking up” became a national rallying cry. President Roosevelt issued Executive Order 9066 on February 19, 1942. There is no mention of camps, concentrations, or ethnicity.

Yet in less than two months, the U.S. Army separated 120,000 people, either Japanese or of Japanese descent, from their homes and property, no matter their citizenship status, and shipped them to one of 10 “relocation centers.”

George Takei was four years old when his family was taken. He has written They Called Us Enemy, a graphic novel about his life that begins with those early years in the camps and goes through his myriad adventures over eight decades.

Drawn toward acting from boyhood, George began his career in 1956 by dubbing the dialogue of Japanese characters into English for the U.S. release of Japanese science fiction movies. He did Rodan and Godzilla Raids Again. Eventually his film roles led to From Here to Eternity and Walk Don’t Run.

After plays, films and a summer at Stratford-upon-Avon, George landed the role of Lieutenant Sulu, the helmsman aboard the original Star Trek TV series (1966–69). This made him the first Asian American to star in an ensemble television series. Springboarding from there, his TV and film work became legendary, including over half a dozen Star Trek movies.

George also spent a lot of time and energy on nonprofit causes, including actively working on plans for the Los Angeles subway as a member of the board of directors for the Southern California Rapid Transit District.

In 1991, George finally received an official letter of apology and a check for $20,000 for all the pain and suffering he and his family endured at the hands of the United States. He used the check as seed money for the Japanese American National Museum.

But famous actors of his generation didn’t come out. George has said that “Arnold Schwarzenegger made me come out [when Arnold ran for Governor]. He said, ‘I’m from Hollywood, I’ve worked with gays and lesbians, some of my best friends are gay.’ I assumed, therefore, he was pro-gay.”

“But when the Marriage Equality Bill landed on his desk [in 2005], he played to the reactionary conservative element of the Republican party and vetoed it,” he said. “Both [my husband] Brad and I were raging, our blood was boiling.”

He still works with the Human Rights Campaign’s “Coming Out Project” and for immigrants who are summarily turned away. He shares his story across the world, has a star on Hollywood’s Walk of Fame, and left his signature and handprint at Grauman’s Chinese Theatre.

For his work advancing U.S.-Japan relations, Emperor Akihito awarded George the Order of the Rising Sun, Gold Rays with Rosette in 2004.

And George even has his very own asteroid! Located between Mars and Jupiter, 7307 Takei was discovered by two Japanese astronauts in 1994. It was renamed in his honor in 2007.

Only a very few Trek alumni have been so honored, including Nichelle Nichols (Lt. Uhura) and Gene Roddenberry, Star Trek’s creator.

His latest project? George provides a voice-over for the almost all-Asian cast of the upcoming animated HBO Max series Gremlins: Secrets of the Mogwai. This is a prequel to the dark comedy cult classic, Gremlins and its sequel, Gremlins 2: The New Batch.