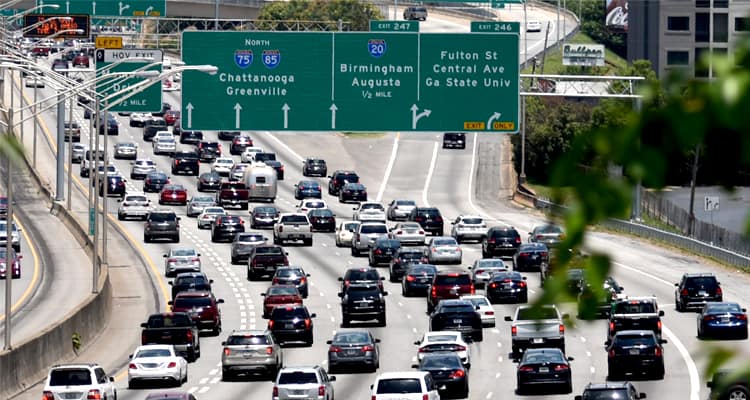 I contend the issues with Atlanta traffic are 50 percent population growth, the other 50 percent self-fulfilling prophecy. Let me give you just a few examples.

I was traveling along 285 East and had to jump onto 75 North. If you’ve never attempted this route, there is a short ride where everyone in the left lanes are continuing onto 285 while the right-laners are heading to 75. Inevitably both do not have the same amount of volume, so one is usually congested while the other should flow smoothly. However, I witnessed a traffic jam in our lanes where there should have been none and wondered where the clog was. Further up I realized people had been slow by watching the other lanes. In other words, if the lane next to them had traffic then certainly they better slow down in their lane in anticipation. At the split they realized, Hey wait there’s no traffic where I’m going and sped up. I was dumbfounded.

The other night I was trying to get onto 285 and noticed construction was taking place in the right-hand lanes. Being dark, a policeman’s car and lights were quite alarming but was simply there to warn you not to merge onto the far right lane. However, the car at the front of the onramp came to a complete stop and stayed there, long enough for the rest of us to have to go around them. When we go on the interstate there were drivers in the open lanes who used the police lights as an excuse to try and stop on the interstate, I assume so they could look and see what was happening. I barely made it out of that cluster without a scratch.

In both cases it was human error and not our population that caused the hazards. There are countless examples of unnecessary traffic, the biggest being caused by slower traffic not keeping right. There is a reason the lanes are set up that way, so that the faster cars can pass and slower cars can be passed and there is always a flow. I know people who justify staying in the left lane as a slower driver in order to avoid accidents that apparently happen in the right lanes. To avoid some phantom fender bender they are really contributing to an hour-long commute for others.

The other big contributor is panic. If you missed an exit, missed a turn, made some kind of error in your route, you slam your brakes and attempt to correct it immediately. Your mistake is no one else’s emergency. Go to the next exit, go to the next turn, stop panicking. Like I said traffic is a flow and your brakes should be used as little as possible. Forcing others to pay for your lack of preparation is one of the biggest offenses on the road. The world won’t end, figure it out further up the road.

Are you first in a turn lane but miss the green light because you were on your phone, the time costing two or three other cars to miss that turn and have to wait again? Do you stop in a roundabout? Next time you complain about traffic, first take a look in the mirror and help the half of the issue we can control.