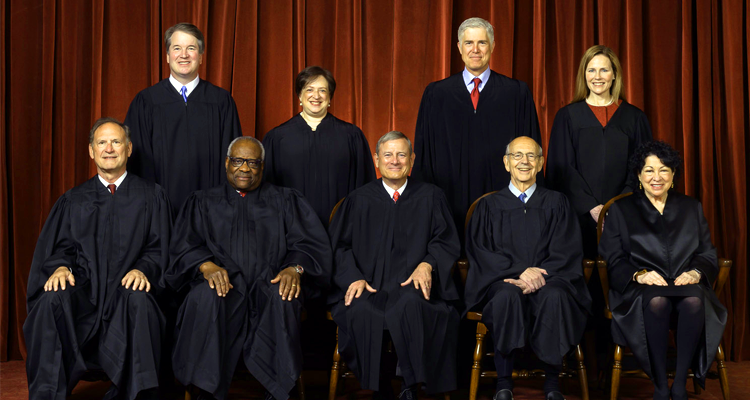 It’s June! The month we celebrate queer rights, when the air gets heated and the blood does too.

But this June? The leaked copy of the Supreme Court’s decision to overturn Roe v. Wade should freeze the blood of every queer in the land, as well as any supporter of a woman’s right to make the most fundamental choices in her life.

But some mainstream queer rights organizations like HRC don’t quite get it, and they should. I mean, the four-alarm-fire claxon is clanging here, people!

“If Roe is overturned, there is no immediate impact on any other case decided by the Supreme Court including Lawrence and Obergefell,” HRC said in a statement. “But it encourages state lawmakers pandering to the base to test the limits of court recognized LGBTQ+ equality.”

John Lewis and Stuart Gaffney, co-founders of Marriage Equality USA, get it:

“At stake in both [reproductive and LGBTQ] movements are individuals’ fundamental freedoms to control their own bodies and to decide for themselves the paths their lives will take,” they wrote for HuffPost in 2016. “LGBT people should care about women’s right to safe and legal abortion not only because it’s the right thing to do but because our two movements depend on each other.”

Sen. Mazie Hirono, D-Hawaii, gets it:

“The concern for us is what’s next with this right-wing Supreme Court,” she told HuffPost. “I can tell you Obergefell is on Justice Alito’s and Justice Thomas’ hit list.”

Valerie Ploumpis, National Policy Director for Equality California gets it and nicely summarizes the Right to Privacy cases:

“The fight for reproductive freedom is inextricably linked to the fight for LGBTQ rights,” she wrote for The Hill in 2019. “We rely on the same constitutional protections — the fundamental ‘right to privacy’ guaranteed by the Due Process Clause of the Fourteenth Amendment … [and] cited in the landmark abortion rights decision in Roe v. Wade, this constitutional right has been reaffirmed in every major Supreme Court ruling on both reproductive freedom and LGBTQ equality — including the 1992 Planned Parenthood v. Casey ruling affirming the right to obtain an abortion, the 2003 Lawrence v. Texas ruling striking down so-called “sodomy bans” and the 2015 Obergefell v. Hodges ruling guaranteeing marriage equality nationwide.”

Hell, award-winning journalists like Jennifer Bendery and Igor Bobic get it:

I get it. For reference, Bowers v. Hardwick (1986) was the Georgia case where Michael Hardwick, in the privacy of his own Midtown home, had sex with another man. Thus, the commission of the crime of sodomy — a felony! — for which Mr. Hardwick was duly convicted. We marched in protest at the Capitol and the Department of Law downtown. One float featured a large brass bed with the effigy of an orally copulating couple atop it.

But when the Supremes upheld Hardwick’s conviction, it rendered any same-sex coupling anywhere potentially illegal. Yet isn’t the decision about how to make love and with whom among the most personal and private you can make?

When Bowers was upheld, we organized the “Second National March on Washington for Lesbian and Gay Rights” (we’ve expanded the definition of queer as time went on and consciousness has evolved).

I’m extremely proud to have protested the Hardwick decision by being civilly disobedient, and arrested for it, on the steps of the Supreme Court during that march.

Fortunately, I did not have to travel to D.C. again and have another arrest on my record with Lawrence v. Texas. Here was another instance of two men having consensual sex in private. This time, the statute violated was a misdemeanor.

Hooray! The Supremes overturned Hardwick, saying intimate sexual conduct is part of the liberties protected under the 14th Amendment, and all the rabid religious frothings spewed in the Bowers decision were null and void.

But the frothings are back. And when Roe v. Wade falls, our house falls down, too. It will soon be cold, very cold. We have to heat things up by organizing our asses off.