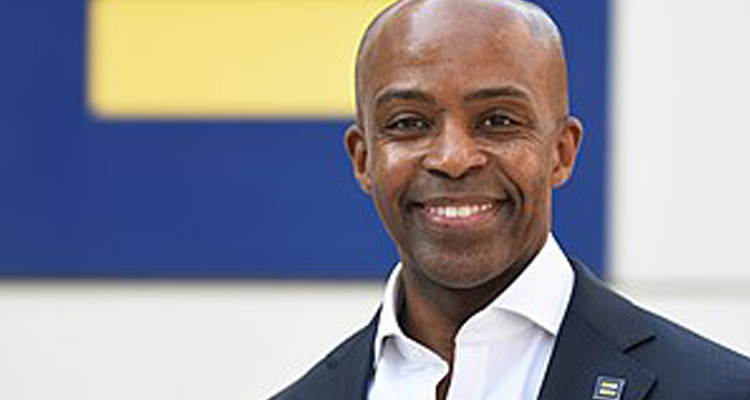 Despite avoiding celebrity news like idiocy were contagious, even I could’ve predicted Kanye West and Kim Kardashian’s separation would break the internet’s bottom floor and chart new depths for marital toxicity. I can’t name Kanye’s last five albums or tell you the last time Kim did that thing that makes her noteworthy (whatever it is), but of course I knew their divorce and custody dispute would eventually be adjudicated via Instagram.

I’ve often called the Human Rights Campaign “the Kardashian of the LGBTQ movement” — famous for being famous, rather than for any merit — and it is equally unsurprising for the queer nonprofit to be embroiled in a messy split from its former president. After two years at HRC’s helm, Alphonso David was fired last September for failing to disclose that he assisted former New York Governor Andrew Cuomo — for whom David previously served as legal counsel — during the sexual harassment investigation that led to Cuomo’s resignation.

David claims in a federal lawsuit he was actually fired because he is Black, HRC will undoubtedly respond that it is not a racist organization — blah, blah, blah. Without forecasting the disposition of David’s case, his lawsuit is a damning indictment of both parties.

Anyone paying attention to HRC’s priorities and employment demographics since its founding in 1980 would not be surprised by the suggestion that its offices are awkward, unwelcoming and even hostile environments for minority employees. Given that history and culture, it is also not unexpected for the organization to attract the type of person of color willing to bite his tongue about HRC’s racism until his favored status was revoked.

“I am filing a lawsuit for the millions of Black and brown people who face discrimination every day but fear retaliation or lack the resources to challenge it,” David said when announcing his lawsuit, which accuses HRC board members of admitting to David he was paid less than his predecessor because of race, ordering David to mute his Blackness to avoid alienating white donors and belittling the work ethic of Black contractors.

Witnessing such discrimination in real time did not compel David to file a lawsuit for millions of people, but rather to meet with HRC board members at a white-tablecloth restaurant off Broadway to sign a contract extension for more than half a million dollars. Imagine how much louder David’s accusations would’ve rung if they had come from inside the house.

David’s lawsuit suggests his tenure and salary increase were warranted because he “exceeded all expectations” and “performed extremely well as HRC president, by any measure” — which may be true as long as you’re not expecting or measuring LGBTQ progress. Rather than an initiative launched or legislative goal achieved, the lone accomplishment David cites in his pleading is having “shattered HRC’s previous fundraising records, bringing in $60 million for the organization.”

There are TikTok accounts that have more effectively championed LGBTQ rights in the past two years than HRC has in four decades. David’s court filing lays bare how the organization measures success, and how David was willing to remain silent about HRC’s toxic workplace as long as he headed it.