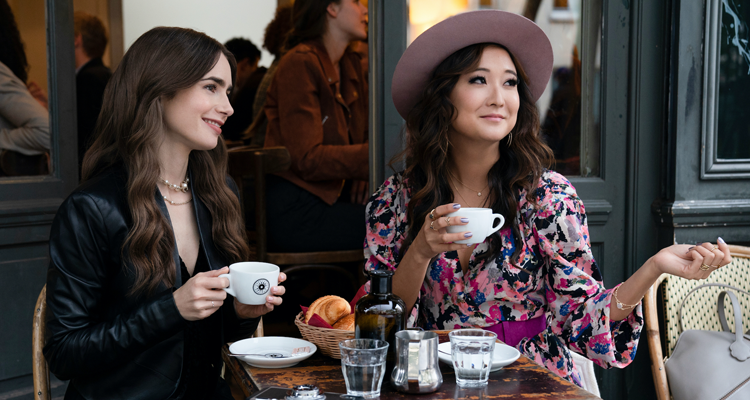 Like many of you, I just watched the Netflix series “Emily in Paris.” Created by Darren Star of “Sex and the City” fame, the show has been met with the kind of cool disdain and online eye-rolling here in Paris usually reserved for Madonna, so I was curious to know if it really was that awful. I went in expecting nothing but the intellectual nutritional value equivalent of a bag of potato chips, but hoped that it tilted a bit more toward the artisanal kettle chip variety.

I didn’t hate it, let me put it that way, which is a very French way of complimenting something. C’est pas terrible is something one hears quite a bit while discussing with friends the latest gossip over a shared plate of cheese and bottle of wine. There are stereotypes in the show for sure, but the criticism it has received is overblown. But it made me wonder what a comparable show might be if it were reversed with a French (gay) guy coming to live and work in Atlanta.

Picture this: Jean-Philippe doesn’t speak English very well and comes from a luxury-clothing brand that just acquired a small Atlanta-based hip-hop clothing brand (in my retelling of the story). He has been hired to give his marketing expertise, but as a white French guy he doesn’t know a thing about Atlanta or its many subcultures. Oh, the hilarity that ensues! I don’t know about you, but I would watch that!

One aspect of “Emily in Paris’s” success is that it focuses on Emily’s perspective of seeing things as an outsider. In Jean-Philippe’s case, he might have a panic attack going to the Midtown Whole Foods, spending several hours overwhelmed by the variety of choices. “They had 47 different kinds of ranch salad dressing to choose from!” he tells his co-workers the next day at the office. “In Paris at the Monoprix, they have one!”

Another possible surprise, and uncomfortable truth for American viewers, might occur when Jean-Philippe doesn’t understand why the food portions in American restaurants are so large. “What does ginormous mean?” he might ask. Or why work bleeds into private life. “Of course I didn’t read the email you sent me!” Jean-Philippe shrugs in one episode, “You sent it after I left work on Friday.” The opportunity to learn each other’s cultures, to question one’s assumptions about others, is one of the pillars of art. Maybe Emily in Paris isn’t great art (as opposed to Jean-Philippe in Atlanta, I’m sure), but it did bring to light some aspects of America that need reflection.

A common criticism by Europeans of Americans is that we’re “loud” and “arrogant.” Similarly, while the United States has only four percent of the global population, we consume far more of the world’s resources and have no problem telling others how to live. We see these stereotypes brought front and center in the first episode when Emily arrives for her first meeting at her new job in Paris. Emily is confronted by her new friend, Mindy, who pushes back on Emily’s traditional, almost Puritanical, view of love and marriage. “Maybe after you’ve been married to the same person for 20 years you’ll change your mind,” she chides Emily when she says how disappointed she is that her boss might be having an extramarital affair.

Many discounted the “Emily in Paris” aesthetic of capturing only the charming beauty of the center of Paris, and not having Emily living and working in one of the less photogenic neighborhoods — after all, the metropolitan area of Paris has more than nine million people and most live in non-picture postcard apartments. Well, Netflix created a more realistic series about a woman who made some questionable relationship choices and lived in a more realistic hardscrabble quartier; it’s called The Eddy, and nobody watched it. I don’t want to watch gritty and depressing. Give me sexy escapism any day.

“Emily in Paris” is a fun distraction. But I think Darren Star can do better, so when Jean-Philippe in Atlanta gets greenlighted and we see that he has a beautiful townhouse in Inman Park, is having picnic dates in Piedmont Park with Cedric (his hunky, Black next-door neighbor), and is zipping around on a scooter along the Beltline, don’t say I didn’t warn you.