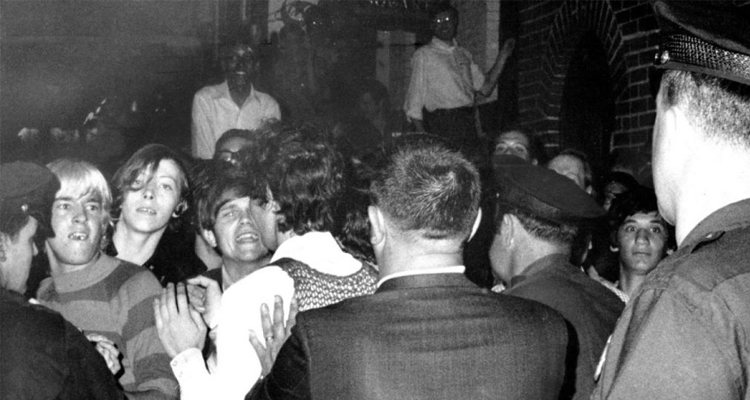 Just a Reminder: Stonewall Was a Riot

It is 1977. AIDS has not arrived and we are in our hedonistic prime. You take your perky white ass and pink lips to a club’s weekly dark room. “Tonight,” you tell a friend, “I’m gonna get me some Big Black Dick.” You have a few drinks and you stride in your ravishing whiteness into the dark room, which, as it happens, is the most racially integrated gay space in the city on these nights. You get your dose of BBD and you leave the room without ever having to interact socially with the man himself. Yes, I know the point of dark rooms is anonymous sex, but sex is the playground of the psyche and coincidence does not explain the highly interracial makeup of those spaces in an era when doormen were demanding three pieces of identification from black men at a bar three blocks away.

So, now it is 2020—over 40 enlightened years later!—and you have a profile on Grindr that says, “Not into Asians and blacks. Sorry, just a preference.” But you’re still darting into dark rooms for the coveted BBD (or you have a separate profile on Grindr). “Sometimes, you just gotta have BBD,” a former friend told me, after uttering the cliché, “Once you go black, you’ll never go back.” Then—I’m serious—he moved to another city because, he said, “There are no [n-words] living there.” This is the insanity called sexual racism. It operates with all the illogic of general racism. As for black men themselves, the dark room reverses history: they own the white bodies for 10 minutes.

Now, these same 40 years later, we are watching global demonstrations in response to the police’s murder of George Floyd. The streets are filled with protesters calling for an end to police brutality. For a few weeks, there is random looting. Maybe you recall the later riots of the Civil Rights Movement when your parents raged about the looting and burning, claiming it exemplified the inherent unruliness of black people that required their constant monitoring by police. Now, in Zoom lunches with your friends, you might parrot their denial by focusing on the shoes stolen from a bashed window display instead of the police brutality. We never seem to remember that the violence always begins with the police. Black people do not initiate the war. They are not the aggressors.

What most confuses me in this condemnation of violence in response to police brutality is our own celebration of the Stonewall Riots in June of 1969. Gay Pride memorializes that brick-throwing, fire-setting rebellion. Eric Cervini, author of the new “The Deviant’s War: The Homosexual vs. the United States of America,” reminds us too that the strategy of our movement before and after Stonewall was almost entirely borrowed from the Civil Rights Movement. Yet we never worked as a coalition. You can proffer all kinds of explanations for that, but one thing is readily observable: After the first few years of the more radical Gay Liberation Front, our activist community became dominated by—sorry—privileged white men whose ultimate goal was complete assimilation, to the unrelenting degree that many now resent the effort to enter coalition with trans people.

Meanwhile, some of these same men still complain about Black Pride: “If they got Black Pride, why can’t we have some White Pride?” The question is so stupid, when posed by an old person, it’s smarter to wait for its asker to die than answer it.

Seriously, it is impossible to grow up in America without internalizing institutionalized racism. We see thousands of younger people acknowledging that and marching through the world’s streets. Older white, gay Americans, well familiar with the problem of internalized homophobia, need only take a step toward self-acknowledgment to start managing racism and finding gratitude for the lessons African Americans taught our leaders. The sad horror of racism, besides its cruelty, is the limits it places on our own adventure in this world, which really is larger than a dark room.

Cliff Bostock, Ph.D., is a former psychotherapist turned life coach. If you are interested in participating in a support group for older gay men, contact him at cliffbostock@gmail.com or 404-518-4415.